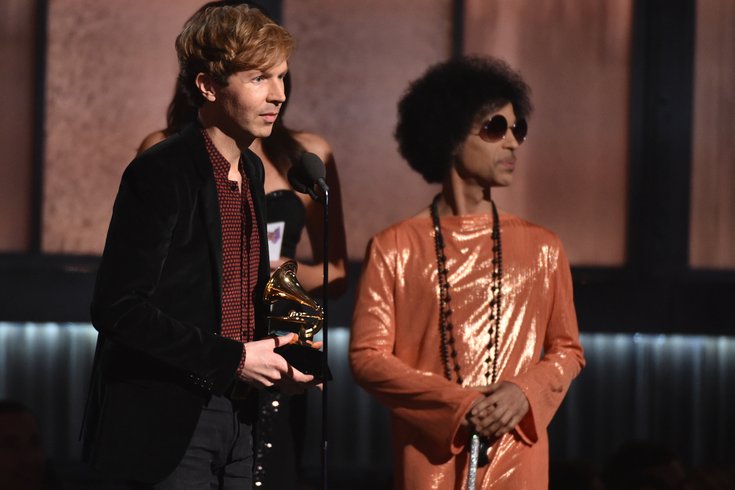 Beck accepts the award for album of the year for “Morning Phase” at the 57th annual Grammy Awards on Sunday, Feb. 8, 2015, in Los Angeles.

Jay Z's face said it all as Kanye West headed on-stage after Beck grabbed the mic to accept his Grammy award for Album of the Year. But as Kanye smiled and shimmied off, Jay Z grinned and laughed. So it was all a big joke, right? Wrong.

In a post-show interview, Kanye said Beyoncé really deserved that award and that Beck should have given it up.

"Beck needs to respect artistry and he should have given his award to Beyoncé."

Here's what he said in the interview:

What happens is, when you keep on diminishing art, and not respecting the craft, and smacking people in the face after they deliver monumental feats of music, you're disrespectful to inspiration. We, as musicians, have to inspire people who go to work every day, and they listen to that Beyoncé album, and they feel like it takes them to another place. Then they do this promotional event, and they’ll run the music over somebody’s speech, the artist, because they want commercial advertising. No. We not playing with them anymore. And by the way, I got my wife, my daughter, and I got my clothing line, so I’m not going to do nothing that would put my daughter at risk, but I am here to fight for creativity. That’s the reason why I didn’t say anything tonight. But you all knew what it meant when ‘Ye walked on that stage.

Despite Kanye's comments, Beck had nothing but nice things to say. He told Us Weekly:

"I was just so excited he was coming up. He deserves to be on stage as much as anybody," Beck said when asked how he felt about West crashing the stage. "How many great records has he put out in the last five years right?"

Even though he said Beyonce should have won? "Absolutely," replied the humble musician. "I thought she was going to win. Come on, she's Beyonce!"

Check out a Vine of Jay Z and Beyoncé's reactions here.