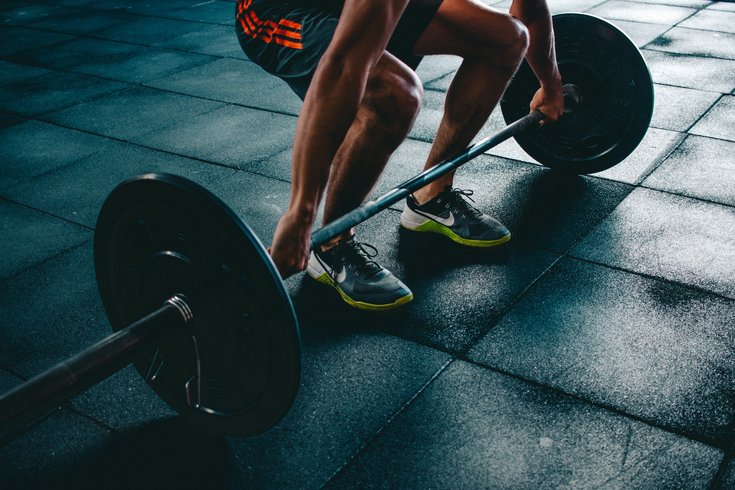 For many men, the first hint that their bodies are aging comes in their 30s, when they recognize their diet might need some adjustments.

Perhaps they used to inhale that pizza to seemingly little effect. But now they find themselves gaining weight.

"The 30s is when it really hits guys," said Josephine Raum, a bariatric dietitian at Cooper University Health Care. "Your metabolism really slows down when you get older."

Getting in shape for the first time or doing so after a prolonged absence from the gym can be challenging – especially as men progress through the latter stages of early adulthood.

Seeking tips for men in their 30s and 40s, PhillyVoice spoke with a pair of Philadelphia-based personal trainers, a sports medicine physician and a dietitian. They offered some basic advice to men looking to begin exercising after a long layoff.

First, they should start out with a game plan, they suggested.

It's important not only to identify what they want to achieve, but also when they will have time to exercise. After all, many people – both men and women – in their 30s and 40s are juggling busy careers and family obligations.

"I would always start with some sort of plan, kind of planning out what you want your short-term and long-term goals to be," said Jayel Lewis, a certified personal trainer at Fitler Club.

"They don't have to be big goals. In order for people to maintain and see results, they should start out with something that's maintainable to achievable, as opposed from not working out at all to working out seven days a week."

Additionally, Lewis suggested selecting an activity or workout that appears enjoyable and finding a friend to accompany you. Getting into shape doesn't have to be a drag.

But he said it is important to ensure that people are using the proper techniques to prevent injuries. Otherwise, they could find themselves back on the couch.

"That's one of the big stumbling blocks to people staying consistent," Schreiter said. "Because that's the goal – to start and stay consistent. You usually see a lot of benefits six to nine months down the road."

When weight training, he encouraged men to work out their large muscle groups – things like the back, quadriceps and hamstrings. But he urged them to give each group enough time to recover before focusing on it again.

"The hot topic is the core," Schreiter said. "I do believe in it, because that is where all our muscle groups attach, from the upper and lower extremities. It's going to be important to maintain those as well."

Injuries become an increasingly bigger concern as people hit their 40s, said Robyn Weisman, a certified personal trainer in Philadelphia. It may be helpful to hire a personal trainer or exercise physiologist to individualize a program and focus on form.

Though running makes a great cardio workout, she cautioned against it due to the stress it places on one's joints.

"It's really low impact on the joints," Weisman said. "It really incorporates increasing strength in the upper body and really improves your posture."

The American Heart Association recommends adults get 150 minutes of exercise each week, including at least 20 minutes of vigorous exercise three times a week.

But it's important to ease into a workout regimen to give the body time to recover. Finding time to get sufficient sleep will go a long way, too.

Many men like to focus on strength training, Weisman said. It's imperative that they get enough protein to allow their muscles to recover.

Raum recommended men eat about 10-to-15 grams of protein mixed with a source of carbohydrates within 30 minutes of working out. The protein will allow the muscles to heal while the carbs will replenish the energy burned.

They then should continue eating small amounts of protein every two hours, she said.

"That will help you to recover your muscles because they're still healing," Raum said. "You can't just work out, get to work, skip lunch and eat a big dinner. You really have to focus on meal frequency."

Raum also cautioned people to watch their calories as they hit their 30s. It can become very easy to overeat, especially when you're watching television or snacking at night. That can undo a lot of the benefits of exercise.

In particular, Raum suggested limiting carbohydrates. Two cups of rice may not seem very big, she said, but it's close to 500 calories.

"It's just very easy to overeat carbohydrates," Raum said. "Not that they're bad, but you need to recognize how much you're having in your portion size. They don't fill you up. They continue to make you feel hungry."

Additionally, Schreiter stressed that it is important for men to make annual appointments with their primary care physicians and to take preventative measures, including blood work and various screenings.