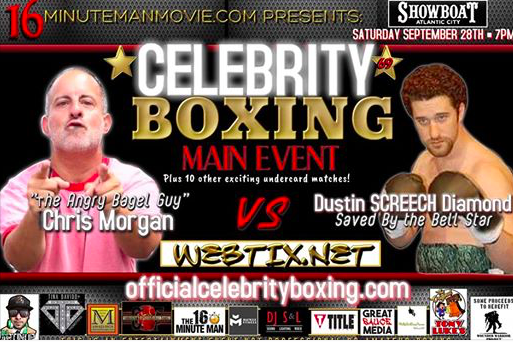 Dustin "Screech" Diamond will take on Chris "Bagel Boss" Morgan at Showboat Atlantic City on Saturday, Sept. 28. The fight was originally scheduled between Morgan and Lenny Dykstra, who backed out on the advice of his lawyers.

The planned fight in Atlantic City between former Phillie Lenny Dykstra and the man who virally flipped out at a Bagel Boss earlier this year has been canceled, to the surprise of no one.

Dykstra appeared on "The Howard Stern Show" Monday morning and announced he's pulling out of his fight with the diminutive Chris Morgan because of an upcoming court appearance.

“The big announcement is, unfortunately, that the fight with the bagel-whatever-he-is will not be happening because, um, I have, uh, a trial that’s going on and my attorneys have informed me that I have a duty and obligation to prepare for that trial,” Dykstra said.

The fight, which was organized by promoter Damon Feldman, a Delaware County native, had been scheduled to take place Sept. 28 at the Showboat Atlantic City. It was supposed to be the main event of the night.

Dykstra, 56, has had a checkered legal record since his retirement from baseball. Most recently, he pleaded guilty to a petty disorderly persons offense following a bizarre incident in which he claimed he was kidnapped by an Uber driver in Linden, New Jersey. Dykstra allegedly threatened to kill the driver after the trip destination was changed.

Currently, Dysktra is preparing for a case that involves allegations he was beaten by sheriff's deputies at Men's Central Jail in Los Angeles. He's alleging malpractice against a law firm.

Morgan went viral this summer when he lashed out against the employees of a Bagel Boss shop in Long Island, claiming they were teasing him — non-verbally, somehow — over his stature. His tirade resulted in another customer taking him to the ground.

Feldman has a history of promoting celebrity fights that don't end up happening. He had hired Bam Margera to be the referee for the Morgan-Dykstra fight, but Margera also backed out when he briefly entered rehab last month.

Dysktra had been training for the fight and staying at a hotel in Atlantic City — reportedly on Feldman's dime, according to The New York Post.

Feldman and other organizers claimed the match still on, including smaller fights among unknowns, but the main event appears to be done unless someone else steps up to fight Morgan.