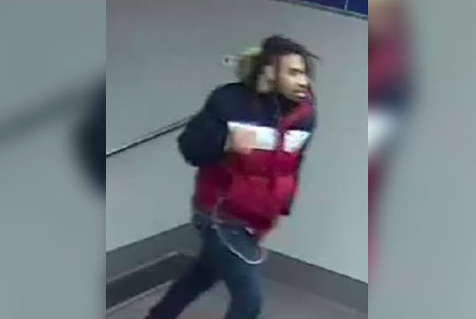 A woman was sexually assaulted at LOVE Park in Center City on Jan. 25, 2020, according to Philadelphia police. Authorities are searching for a suspect, shown above, who escaped the scene after falling onto SEPTA's underground concourse at 15th Street Station.

Philadelphia police are seeking a man who evaded capture last weekend after he allegedly sexually assaulted a woman at LOVE Park in Center City, authorities said.

The alleged incident occurred around 5:20 a.m. on Saturday, when the 41-year-old victim entered the west side of the park at 1500 JFK Boulevard.

Investigators said the woman was approached by an unknown black male, who punched her and knocked her to the ground. The suspect then sexually assaulted the woman, police said.

An unknown person called police after hearing the victim scream for help. When officers arrived, the victim fled the scene and attempted to hide on a ledge by a set of escalators leading to SEPTA's 15th Street Station, according to police.

During a brief struggle with police, the suspect fell approximately 25 feet to the underground concourse, Captain Mark Burgmann said at a press conference Wednesday morning. The suspect managed to escape from authorities.

Surveillance video released by police on Wednesday showed the suspect running through the station, apparently injured.

Investigators described the suspect as a 30-year-old black man with dreadlocks and an average build. He was last seen wearing a red, white and blue hooded jacket.

Anyone with information about this crime is asked to contact the Philadelphia Police Special Victims Unit at 215-685-3252. Tips can also be submitted anonymously using this form.