Mailbag: How much younger will the Eagles be in 2020? 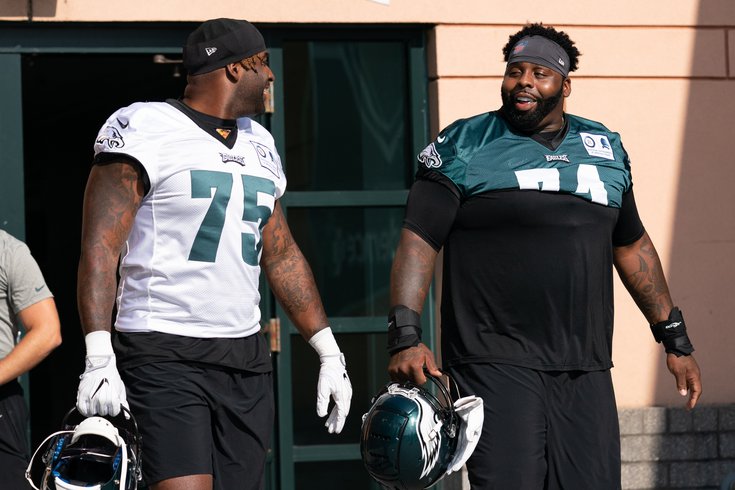 Even if the Eagles bring back Vinny Curry and/or Jason Peters, they'll be significantly younger than they were a year ago.

Question from TeddyFranchise: Jimmy, I know you keep up with the Eagles' age every year. Do you have an idea of how much younger they'll be this year than they were last year?

Last year the Eagles had the second-oldest roster in the NFL with an average age of 26.6, and we outlined some of the dangers of that. This offseason, the Eagles had 10 draft picks as opposed to five in each of the last two offseasons, and they moved on from a number of their older players. They will definitely be younger in 2020.

In my 53-man roster projection from after the draft, I had Jason Peters, Vinny Curry, and Brandon Brooks on the roster. If you substitute Jordan Mailata for Peters, Prince Tega Wanogho for Brooks, and oh, say, Shareef Miller(?) for Curry, the Eagles' average age at final cutdowns will be 25.5. That would a drastic drop from 26.6. My 53-man roster projection won't be perfect, but that's still a good rough number to project, for now.

Even if they were to add Peters they'd still be at 25.8. Of course, younger doesn't necessarily mean better, but they'll be closer to the middle of pack this year than they were a year ago.

Question from RobG: I saw that the Eagles have interest in trading for Joe Thuney. What do you think?

I saw that rumor, and it doesn't make any sense to me. The Patriots franchise-tagged Thuney, and in my view, even if he was a second-team All-Pro in 2019, he would be bad value. Why? Well, the Patriots franchise tagged him, and when the NFL determines franchise tag numbers, they use the average of the top five offensive lineman, as opposed to differentiating between tackle, guard, and center. As such, Thuney's franchise tag number is essentially the average of the top five highest paid offensive tackles.

If the Pats can't work out a long-term deal with Thuney, then he will play on the tag this season at just under $15 million, which will make him the one of the top two most expensive guards in the league, alongside Washington's Brandon Scherff, who also got the tag.

Here's how that rumor was framed by Albert Breer of MMQB:

Would (the Eagles) take a big swing on someone like New England’s franchise-tagged All-Pro guard, Joe Thuney? Based on what I know … I think they’d at least explore it. But, again, that’s probably more of a down-the-road contingency thing for now.

OK, so, if franchised-tagged players don't sign a long-term deal by July 15th, they have to play the season on the tag. If Thuney is a "down-the-road contingency" for the Eagles, then presumably they wouldn't trade for him until sometime well after July 15, seeing as no practices are happening between now and then. In other words, if they traded for Thuney, he'd be on their cap at just under $15 million, with no ability to sign him to a long-term deal until after the season.

Because the Eagles are currently projected to be way over the 2021 cap, they're going to have to roll as much money from 2020 into 2021 as possible. Even if the Patriots were just like, "Hey guys, you can just have Thuney, don't even bother giving us a draft pick for him," the Eagles still probably couldn't take on his contract.

Add in that RG is probably the least important position on the offense, and the fact that the Pats would demand a high pick for him, and you can go ahead and ignore that silly rumor.

Question from Yoyoma: How many more signings will Howie make before the start of camp?

Ha, I actually wrote out 25 over-unders for a podcast episode, and then Brandon Brooks got hurt, so that changed things. That was one of my over-unders, which I had set at 1.5. I'd go under. I think they'll make one move before camp, and I think that'll be a running back (not hinting at any specific inside info there).

Question from EaglesFanInTX: Greetings Lord Jimmy. Your signature sandwich from the last mailbag sounded pretty good. What would your signature dessert be?

Ha, I think that was a few mailbags back, but thanks! In case you missed it, he/she is referring to "The Jimmy," arranged exactly as shown below:

As for my signature dessert, I'm a big ice cream guy. So we'd start there. I had previously mentioned on Twitter that Breyers vanilla fudge twirl is my favorite brand/flavor, which is apparently a controversial take.

But that's where I'd start. 3 scoops. Then I'd add in broken up pretzels, and I'm going to get very specific here. They must be Herr's extra thin pretzels, in the blue bag. They have a perfect salt-to-surface ratio, and they won't get even a hint of sogginess, maintaining optimal crunch. I can't stress enough how important it is that those exact pretzels are used. Whenever I go to my mom's house, she just has whatever crappy pretzels are on sale, and it's not the same. If you have to pay an extra couple of bucks for the right pretzels, just do it.

Add in some rainbow sprinkles, and maybe some Reese's pieces (to be clear, Reese's pieces, not broken up Reese's peanut butter cups), and boom, done.