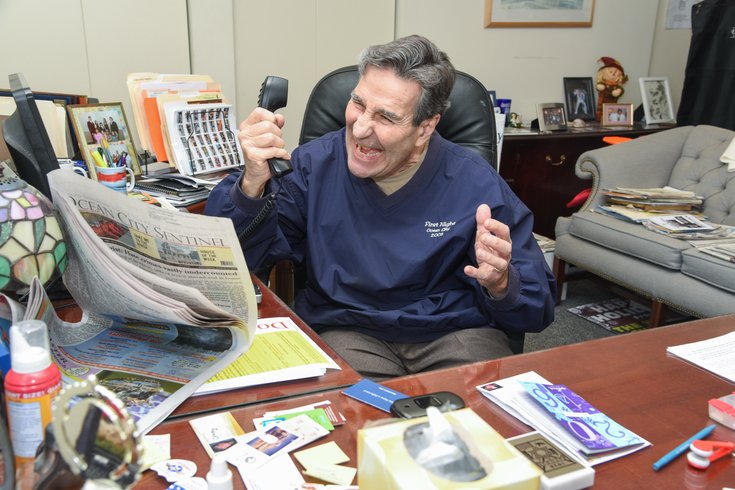 Mark Soifer, 84, never let his dignity get in the way of promoting Ocean City, happily clowning for cameras, donning trash cans, whispering to a llama, wading into the ocean while wearing a suit or – his favorite – channeling the thoughts of Martin Z. Mollusk, a hermit crab whose gifts include weather forecasting and acting as the resort town's homegrown superhero.

After all, the man began working full-time for the resort city he loves – but can’t afford to live in – in 1971.

He’s 84 now, the age he’ll still be when he retires come January, after 45 years as public relations director.

Soifer’s roles will be split, with Michael Hartman handling events and Doug Bergen pumping out news releases and keeping up on media contacts. Hartman is the artistic director of a local theater company and works on lots of made-for-television live events, particularly parades. Bergen is a former news editor.

This week, the three men were working on Night in Venice, just one of a handful of city events Soifer did not create. It began in 1954, modeled after an actual Venetian boat parade.

While the event centers around a boat parade – it starts at 6:30 p.m. Saturday – which runs past themed and lighted homes on the bay, there are lead-up events before and fireworks afterwards.

The town teems for Night in Venice. Only the Fourth of July draws a bigger crowd. Planning takes months.

And Soifer is glad for the support of his replacements during his swan song summer.

“I’m 84. I’m not as sharp as I once was. I don’t have as much energy,” says the man who drives two hours a day just to get to and from work from Vineland, where he raised four children with his wife of 59 years.

“I don’t want to do a …. Oh, leave that phrase out!” he says with a characteristic twinkle and giggle as he edits himself for the family audience that is at the core of Ocean City’s appeal – an audience Soifer grew and ferociously protects. 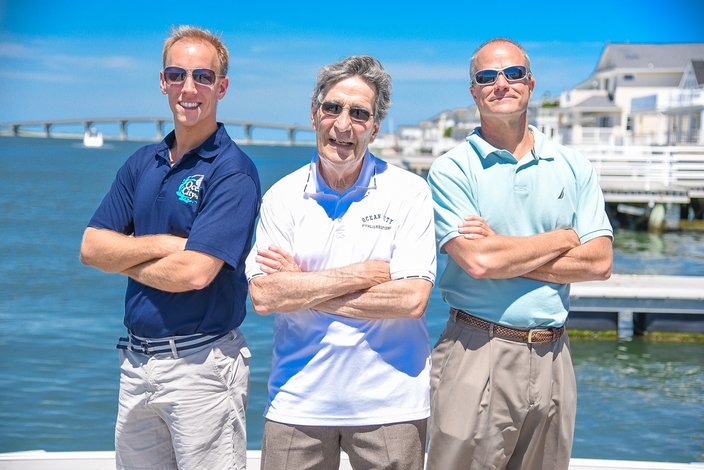 Mark Soifer, 84, center, is presiding over his last Night in Venice celebration in Ocean City. The bayfront boat parade and home decorating contest, which takes place Saturday, is one of the resort's few events that predates his role as the city's public relations and events impresario. It will take two to fill his shoes when he retires in January: Michael Hartman, left, will serve as special events coordinator, and Doug Bergen, right, will be the city's public information officer.

His second-floor City Hall office is cluttered with projects, props, and papers, so much so that he needs to move a stack of documents out of the way even though there are several chairs and sofa – all covered – to make room for a reporter.

There are two prized possessions in the office.

One is a tattered black-and-white portrait of President Franklin Roosevelt, once his father-in-law’s hero.

The other is a sun-faded color photograph of Joe DiMaggio, who like Soifer, played the outfield. The Yankee Clipper, who spent large chunks of his later years in nearby Atlantic City, was the grand marshal of Ocean City’s 1983 baby parade and he autographed the picture.

A lifetime athlete who ran three miles a day until a hip replacement a few years back, a baseball scholarship to Temple University brought him a degree in journalism and led to the rest of his life.

He worked as a reporter and editor during a stint in the Army in the mid-1950s.

He taught English for a year, but found he didn’t like it, mostly because there was so little time for his own writing – while he’s known for his pun-filled verse, Soifer is considered a serious and gifted poet by writing peers.

He took a job as a copy writer at an ad agency afterwards, and then found a job in then-rural Vineland at another agency because the city kid wanted to experience country life.

While there, he put on a clothesline art exhibit, which lead to an invitation by a prominent Ocean City resident asking him to replicate the show in the resort.

That part-time gig earned him the city’s first full-time public relations post in 1971.

What they all have in common is Soifer’s good-natured daffiness. 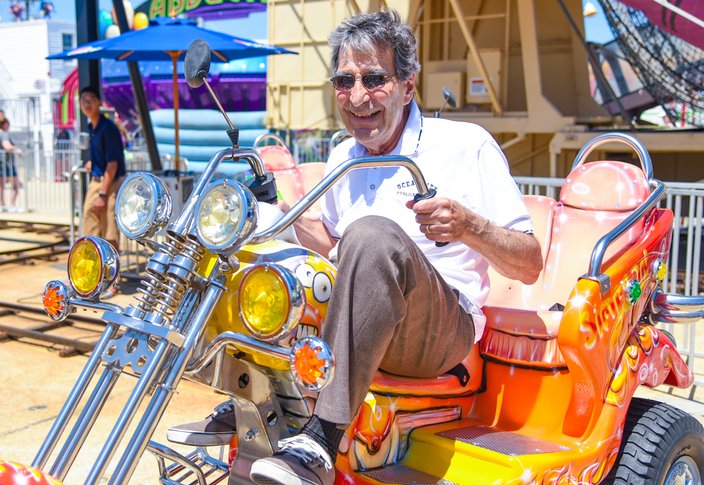 Presiding over all things wacky and wonderful in Ocean City has been quite a ride for Mark Soifer, who turned shore promotion into an art form, with goofy pun-filled news releases and off-beat events, such as the Miss Crustacean Hermit Crab Beauty Pageant and the creation of his best-known character – and alter ego – Martin Z. Mollusk. Soifer, who retires in January, is 84. He started full-time with the city in 1971.Here, he has some fun on the boardwalk.

The events offer a blend of gentle humor, usually with himself as the primary comic prop – who else wears a trash can with such good humor? – leading to images made for media sound bites and easy in-and-out reporting.

And the events all cost next-to-nothing to stage, important when Soifer began and the only city budget was for his salary.

His favorite creation is Martin Z. Mollusk, a take-off on a forecasting groundhog who seems to always predict an early spring to Ocean City’s beaches.

“Creativity, that’s what I’m good at,” he says.

But even creative geniuses have some misfires.

Take for instance, Bash the Media Day. This was at the height of ocean dumping wash-ups that deposited garbage and hypodermic needles on the New Jersey coast.

Don’t remember that one? Whacking collages of media accounts with plastic bats?

Maybe that’s because it was a one-time event, never to be repeated after being excoriated by Steve Lopez, a former columnist for the Philadelphia Inquirer – and other members of the media.

Soifer concedes it was an outstanding killer Lopez column – at his and Ocean City’s expense.

“But you couldn’t say it worked out exactly like you wanted!” he wincingly laughs.

And while the offbeat is at the helm of Soifer’s wheelhouse, the events that are Ocean City’s greatest successes by sheer numbers are more mundane.

That would be the spring and fall block parties in the midst of the downtown and the resort’s First Night on New Year’s Eve.

And they are only partially Soifer’s creations.

He borrowed the First Night idea from another city.

And an assistant suggested including crafters in the block party, which is what made it take off, with 350 crafters and as many as 40,000 visitors on a good weather weekend.

The man who still uses a flip phone – his wife, Toby, handles the family texting and pictures on her smartphone – roars a bit when asked the biggest change since he began his job for Ocean City.

As a poet who has written since he turned 15, with eight books printed, a writer who sees words in his mind’s-eye, he admits to missing typewriters from time-to-time.

Come January, when he retires from his $108,000 a year post, he’ll turn more toward poetry and get to the YMCA more often.

“I like to imagine and create things,” he says.

Bergen concedes there is no real filling Soifer’s shoes.

“I can only hope to sustain all that Mark has created with as much poise and good humor,” says Bergen.