Without Pennsylvania, Ronald Reagan would not have been president. He lost Pennsylvania's primary in 1980 to George H.W. Bush — but a majority of the state's delegates still voted for him at the Republican National Convention, paving the way to his presidential nomination.

In 2016, Pennsylvania's delegates may play kingmaker once again. Only 17 out of the 71 Republican delegates are legally obligated to vote for the winner of the state's April 26 primary.

The 54 delegates who remain can vote for whoever they want. Just five percent of the 1,237 Republican delegates will have that privilege during the first round of voting at the convention.

"I personally think we're going to have a very pivotal role ... rightfully so as a swing state, as a battleground state that both parties fight for," said Chris Vogler, a business consultant and Republican ward leader in Philadelphia.

"If Republicans are drawn into a mud wrestling match, they're going to have trouble hosing themselves off after the nomination." — Former Congressman Phil English

Vogler, 42, is one of only three people running to be delegates from Pennsylvania's 1st Congressional district. Each of Pennsylvania's 18 districts will get to vote for three delegates, so barring a one-in-a-million chance of a write-in candidate winning, Vogler is guaranteed to win a spot at the convention.

He's not promising, however, that he'll vote for the winner of the popular vote in his district.

"I'm going to give strong consideration to how the district votes," said Vogler, but he'll also consider "the best person for us to win the White House."

The delegate candidates are split between those who plan to vote for the winner in their district and those who plan to go their own way. In a survey of 132 delegate candidates by the Pittsburgh Tribune-Review, 66 pledged to vote as their district voted on at least the first ballot while the rest are either leaning toward a particular candidate or uncommitted.

"To me, 'uncommitted' means you have not committed to a particular candidate but you're committed to the process and you're going to hear everyone out," said Calvin Tucker, who is running in Philadelphia's 2nd District. 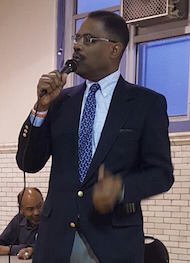 Source/Facebook
Tucker, left, is undecided on who to vote for. The chairman of both Pennsylvania and Philadelphia's Black Republican Council, he listed "electability" as one of his main guiding principles on how to vote.

Another candidate in the 2nd District, lawyer Elizabeth Havey, said that she would cast her first ballot for the winner of the popular vote in her district, but is "uncommitted on the second and third ballot."

And a third candidate, conservative activist Aldridk Gessa, is supporting Ted Cruz no matter how the district votes. "People know exactly where I stand, and those people whether it's a small minority or a large minority, will be represented as well if they vote for me," she said.

Meanwhile, there's a five-person race for delegate positions in the 7th district, which includes parts of Delaware, Montgomery and Chester counties. Candidate Ralph Wike III told PhillyVoice he is supporting Trump; candidates Robert Willert and Michael Puppio are going with the popular vote.

"My mind is open until 8 p.m. on Tuesday the 26th when we'll know who the winner of the 7th congressional district is, and that's who I'm committed to on the first ballot," said Puppio, an attorney based in Media. He said he would "try to stick with that vote" on subsequent ballots as well.

Puppio, who attended the last two GOP conventions, says that previous conventions have felt like "infomercials" for the party.

"This convention stands to have a lot more drama, a lot more intrigue, and a lot more uncertainty," he said.

He wouldn't be surprised if candidates started making deals to sway over delegates — not corrupt deals, he stresses, but "all proper things" like concessions over who's going to be Vice President or what goes into the official party platform.

Vogler, on the other hand, thought that the sheer size of the convention might make deal-making infeasible -- unless a sizable coalition of delegates can agree to vote in unison.

"You're talking over a thousand people, and you're like herding cats at that point," he said.

Phil English, a former Congressman and veteran of five previous Republican conventions, stresses above all is that if there's a contested convention, it must be conducted with utmost transparency to voters.

"If Republicans are drawn into a mud wrestling match, they're going to have trouble hosing themselves off after the nomination," said English, who is running for delegate in the 3rd district.

The veteran statesman pointed out that Ronald Reagan lost the contested convention in 1976, but he was "gracious in defeat" and led the party to victory four years later.

Puppio says that voters have to realize that "conflict, discussion, rules, political dealmaking" aren't a sign of chaos, but the normal way that parties choose their nominees. Recent conventions may have been bland, but that's an exception to the historical rule.

"This is how the process works. It's been this way for years, since our Republic was founded," he said.

After all, even the convention that nominated Abraham Lincoln was contested. He didn't win until the third round of voting.

And guess which state's delegates helped put him over the top?

Want to see who is running for delegate in your district? Click here, select "Delegate to the Republican National Convention" under "Office," and then select your congressional district.