By Brian A. Saunders
PhillyVoice Staff
Business Mitchell and Ness
from 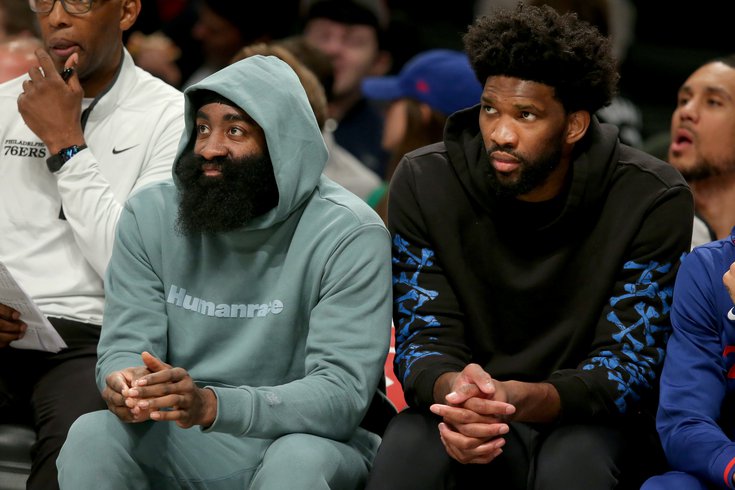 Sixers duo of James Harden and Joel Embiid were added to a star-studded list of athletes and entertainers with an ownership stake in the throwback apparel company Mitchell & Ness.

Sixers duo James Harden and Joel Embiid have a lot of accolades on the basketball court, with multiple NBA All-Star appearances, scoring championships and All-NBA team appearances between them. There isn't much they haven’t done, besides winning a championship.

Their global brands are now also rising off of the court. While Harden owns stakes in successful businesses, such as Body Armor Sports Drink, Embiid has partnerships with brands like Under Armor. In addition, the teammates recently added to their ventures with an investment in Philadelphia sports apparel company Mitchell & Ness.

The ownership stake is expected to lead to collaborations, including time capsule-released merchandise collections by the athletes. In addition, it’s an opportunity for people to express their fandom through past and present players.

“It was a great opportunity,” Embiid told the Inquirer. “Obviously, Micheal is my guy. That was an opportunity I couldn’t pass. Obviously, he’s helping me. There’s a lot of other guys involved, and I think it is going to make a great group, and you try to make it as successful as possible.”

In June, Rubin announced he was selling his stake in the Sixers despite his close relationship with many players. Last week, his divestment was completed and his stake was sold to David Adelman.

Rubin’s Fanatics brand is one of the leading manufacturers of sports apparel and memorabilia. The company has partnerships with the NBA, NFL, MLB, NCAA, NHL, Nascar, and Formula 1 racing. Fanatics, which exceeded $3.4 billion in revenue in 2021, has purchased several businesses over the past few years, including trading card company Topps.

“Mitchell & Ness is an iconic brand and a pioneer within our industry,” Rubin said. “Growing up as a kid in Philadelphia, we looked at Mitchell & Ness as a badge of pride, and I truly believe this legendary brand has no limit.”

Mitchell & Ness was established in Philly in 1904 as a sports equipment company by Frank Mitchell and Charles Ness, specializing in stringing tennis racquets and making custom golf clubs. In the 1930s, the company began outfitting the Eagles before making uniforms for the Philadelphia Athletics and Phillies.

Once leagues shifted to league-wide apparel contracts to outfit teams, the brand switched gears. In 1985, a custom request for repairs on an old 1960 Pittsburgh Pirates uniform sparked the idea of nostalgic sports apparel, which the company has been creating ever since.