Amid confusing offseason, will Phillies actually address their biggest needs? 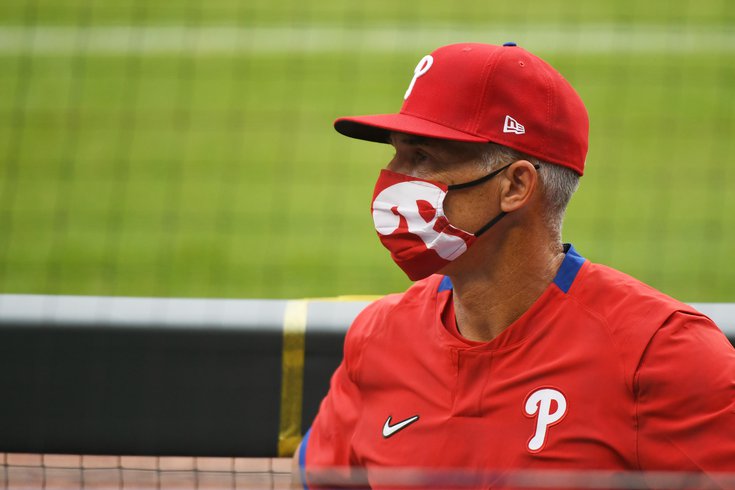 The Phillies offseason so far, much like the last few seasons on the field, has been filled with disappointment, confusion and frustration.

I guess it makes sense.

In the Phillies' defense, the current offseason remains in some kind of strange limbo as the unclear short-term future (like, will there be a DH in the NL? Or what will the schedule look like in 2021?) is murky at best. Even when compared to the most recent MLB offseasons — which moved at a snail's pace — this one is particularly boring and absent any action.

The (virtual) Winter Meetings are underway and the Phillies roster remains very much in doubt, as rumors about trades for star players like Zack Wheeler, Aaron Nola, Jean Segura and others threaten the Phillies commitment to competing. Their to-do list somehow seems to get longer and longer despite nothing happening.

Reports have surfaced, and have also been refuted, that the Phillies are in a big time money crunch and could start to aggressively tank and rebuild. Or they could stay the course and try and add the few pieces many believe would make them contenders. According to TheLines.com Philly has the 13th best odds of winning the World Series in 2021 at this point in the offseason (+3000).

If they do indeed care at all about winning, we've broken down what their biggest priorities should be:

1. Get a GM (or president of baseball ops)

Regardless of what the team's goal is, without a singular voice and a leader to enforce a strategy, the Phillies will be nothing but a middling feuding confederacy of office workers. That includes if they want to rebuild. John Middleton said the Phillies were absolutely not trading Wheeler, which is s good sign. But even if they were, having a competent front office structure would make sure they get a better return in a potential trade. It seems clear that the Ned Rice interim situation is not one that is making Middleton happy, which is why it makes sense that the team is slowly, according to reports, starting to interview and consider candidates to lead the front office.

When the team's president Andy MacPhail spoke to media members over a month ago, he teased that the timeframe for adding a new GM could take over a year (due to COVID.... his explanation was less than convincing). But it does appear that there is a chance the team does figure this out this offseason. It couldn't come as a better time, as the ingredients for success are floating around just within reach.

With or without a GM, the Phillies need a catcher. J.T. Realmuto's list of suitors appears to actually be getting shorter, with the Mets reportedly focus on James McCann and the Yankees hoping beyond hope to bring back slugger D.J. Lemahieu. The Nationals now appear to be the biggest threat for his services.

Philadelphia is bringing back Andrew Knapp, who had a breakout year in 2020 in what has to be described as limited action and would be much better as a backup to Realmuto than the starter. If Philly strikes out on Realmuto, who is 30 and will be seeking the biggest contract ever for a catcher in baseball history, they may stay in house and see what they have in Rafael Marchan, an intriguing Top 10 prospect. But the pressure is on for them to make a Realmuto deal. They gave up a lot for just two years of his services, and locking him up for longer would go a long way toward restoring confidence in the team.

The Phillies need at least one starter right now for their infield — and if they are serious about trading away Segura and his $14 million hit in 2021, they might need two.

Here's the scenario as it currently stands.

1B-Rhys Hoskins is the first baseman, unless he too falls victim to a potential firesale in which case fielding a potent infield to win the NL East will not be a concern for the Phillies.

2B-This is Segura's spot, and one that could theoretically be fielded by Scott Kingery as he will be looking for a bounce back year. Kingery can play any infield position (plus the outfield).

SS-The starter from last season, Didi Gregorius, is a free agent and the Phillies could still bring him back. He is more than deserving as he performed as one of the team's best hitters on a prove-it one-year contract in 2020. Moving Segura could theoretically create some dollars for investment at shortstop. We should note that none of the Phillies top prospects in the middle infield spots appear to be close to making it to the majors.

3B-The Phillies have a cheap potential All-Star in returning second year Alec Bohm, who also can play some first base.

Something will need to happen transaction-wise on the infield front. Will they be aggressive and try and bring someone in via trade? Will they dump Segura and Gregorius and settle for a stop-gap veteran while they wait for Bryson Stott?

If you are still digging into this article you no doubt already know about the Phillies sporting the worst bullpen unit in baseball history last year, and it costing them one of the eight NL playoff spots last summer. The team will feel an urgency to work on this problem and rightfully so. There are some big name relievers available via trade, like Chicago's Craig Kimbrel, as well as free agent talent.

However, knowing this team as we do, and knowing their sudden aversion to excess spending, they'll probably look to add on the margins and find bargains to help assemble their bullpen. The key will be having depth, as the team was forced to use converted prospects who were used to starting, and veterans who were way overpriced over the last few seasons. The Phillies, according to spotrac, have around $60 million to spend before hitting the luxury tax, and that's before they address any of the concerns on this list. It's likely bullpen gets the short end of the stick and is once again a middling group of unproven arms.

The Phillies have Bryce Harper. After him, all of their outfielders fall into one of two categories: old, or unproven.

Cutch is 34 and is getting paid $20 million this season. He is a clubhouse leader and has some skill left, but he's likely to be kicked to the curb before the team accepts a 2022 option. Which means the team has to find a way to address their lack of outfield stability. Garlic is approaching 30 but cheap and under team control and could be a fourth outfielder with some pop, but he's nothing exciting.

Moniak is the former No. 1 overall pick who made his MLB debut last year and was unimpressive. He'll probably get one last shot. Quinn is the oft-injured speedster who hasn't shown he can be reliable during a handful of platooning stints in the majors. Haseley is another former first round pick who has been solid, but projects more as a fourth infielder on a truly good team.

The Phils seem less likely to make a splash at this position despite the glaring need, so get used to the options above.

We are including depth here ahead of the final starter (which is No. 7 below) because it's very possible that this is the most underrated reason the Phillies were unable to make the playoffs in 2020. Their lack of starting pitching depth literally forced manager Joe Girardi to pitch bullpen games several times during the stretch run. So perhaps more than making a big move for a lights out closer, or spending a bunch of cash to acquire a veteran starter, the Phillies need to bring in a quantity of pitchers and backups who can take the baton when called on.

In just a 60 game season, 10 different Phillies started games on the mound, and 29 threw at least one pitch. That's just as related to players being unreliable as it is to injuries. Depth is a big issue, particularly as COVID-19 may not be a thing of the past by April.

The Phillies brought back Vince Velasquez last week ahead of the contract tender deadline, so they technically have all five of their 2021 starting pitchers lined up:

There will be a little competition in spring training between Velasquez (and perhaps Howard) with prospects Ramon Rosso, Adonis Medina and others, but the Phillies may be best served in bringing another starter in who can really push Velasquez, and give them an alternative option. VV can always find his way in the bullpen.

So there you have it, a very simple list of seven extremely important, complicated and expensive things the Phillies need to do to fix their roster and compete next season.