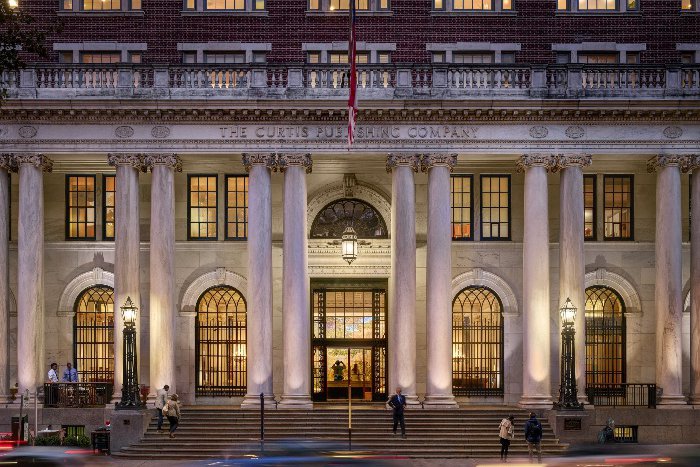 An permanent dinner theater is opening in 2023 inside The Cutis building in Old City. The Red Rum Theater will hosts the interactive murder-mystery shows by Without A Cue Productions.

Without A Cue Productions, a Bensalem-based performance troupe known for it's traveling productions of pop-culture themed murder mysteries, is opening an interactive dinner theater at The Curtis building in January.

Red Rum Theater, a 100-seat cabaret-style venue located inside the historic building on Walnut Street across from Washington Square Park, will be the first performance space in Philadelphia dedicated to interactive mysteries. Without A Cue will offer appetizers and spirits from Pops McCann Whiskey to guests seated at cocktail tables during live performances.

The theater will take over the spaceformerly occupied by Cooperage bar and restaurant, which had been inside the Seventh Street entrance, on the ground floor of The Curtis for nine years.

Beginning Jan. 17 at Red Rum, Without A Cue will do daily performances its popular "Golden Girls" murder mystery, which had been on stage at Craft Hall earlier this year. The show's opening night coincides with what would have been "Golden Girls" star Betty White's 101st birthday. The actress died on New Year's Eve in 2021.

"This has been a project in the making for 20 years, and a major goal for the development of Without A Cue," said Traci Connaughton, executive director of Without A Cue. "Choosing the Curtis as our future home seemed out of reach at first, but it was a dream venue and a perfect fit for our new theater. We are so excited to continue our in the heart of Philadelphia providing laughter and joy to many."

Without A Cue was formed in 2002 and had done shows in Pennsylvania and New Jersey. The 50-piece theater company recently started performances of "Phriends," its Philly-inspired mystery based on the hit 90s sitcom "Friends."

A post shared by Without A Cue Productions (@withoutacue)

While Without A Cue has been preparing for the opening of Red Rum Theater, its shows have been on stage at South Street's Counter Culture. Limited tickets are still available through Dec. 17 for "Phriends", and the troupe says that show could be performed at Red Rum Theater sometime in 2023.

Red Rum will have a Black Friday sale for tickets to "Golden Girls," offering 25% off for shows from Friday, Nov. 25 through Monday, Nov. 28. Tickets start at $35, with VIP tickets starting at $75.

The Curtis will have a ribbon cutting for Red Rum Theater on Monday, Jan. 16, at 6 p.m.

For more information or to purchase tickets to any of Without A Cue's shows, check out the official Red Rum Theater website.