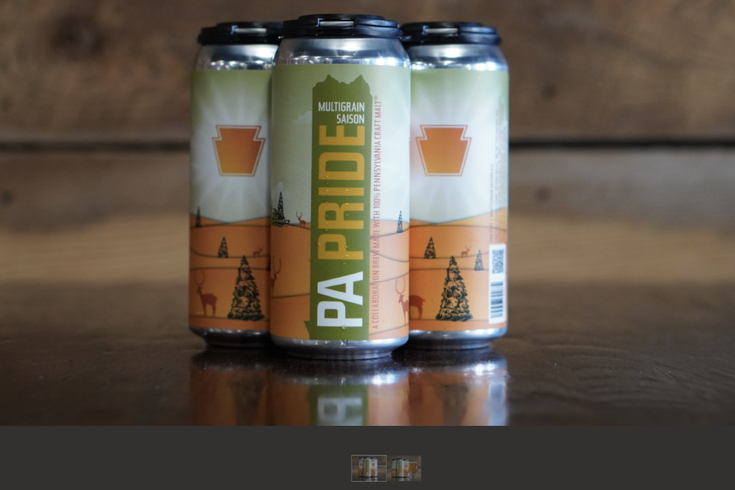 The seventh beer in the PA Pride series, a multi-grain saison, will be released Friday at more than 20 craft breweries in Pennsylvania. The Belgian-style beer was brewed by Bald Birds Brewing in collaboration with Deer Creek Malthouse, Zuckerman Honickman and GEMS farm.

Deer Creek Malthouse has teamed up with several Pennsylvania breweries since November 2020 to release a beer series that celebrates the state's agricultural history.

The latest brew in the PA Pride series, a multi-grain saison dubbed PA Pride 7.0, will be released in 16-ounce cans at more than 20 craft breweries in Pennsylvania on Friday. Some of them also will have the beer on tap.

The beer, which has a 5.5% alcoholic content, was made with grain from the West Chester-based Deer Creek. Its hops come from Zuckerman Honickman in King of Prussia and GEMS farm in Carlisle, Cumberland County. It was brewed at Bald Birds Brewing in Audubon.

Patrick Countryman, the head brewer at Bald Birds, described the beer as a Belgian-style saison with an earthy blend of barely, rye, buckwheat and sorghum with floral and grapefruit notes. There also are hints of pepper and spice, and a touch of sweetness.

Like its predecessors, the beer can's label showcases Deer Creek's barn with deer – this time with a light green and orange color scheme. The "PA Pride" logo runs vertically on the can.

The promotor Breweries in Pennsylvania has an interactive map that shows the locations of each brewery that will sell the cans. It also notes whether they will have the beer on tap. There are 12 locations in the Philadelphia region, including two in the city – Urban Village Brewing Co. in Northern Liberties and Cartesian Brewing in Passyunk.

The multi-grain saison is the third beer in the PA Pride series to be released this year, and the seventh overall. A double IPA was released in April followed by a fruited sour in June. An amber lager is coming before the end of the year.

The PA Pride series was organized in 2020 by Deer Creek and Breweries in PA in an effort to support craft breweries amid the COVID-19 pandemic.