Paul Hagen: Is there a Bryce Harper-Charlie Manuel conspiracy? 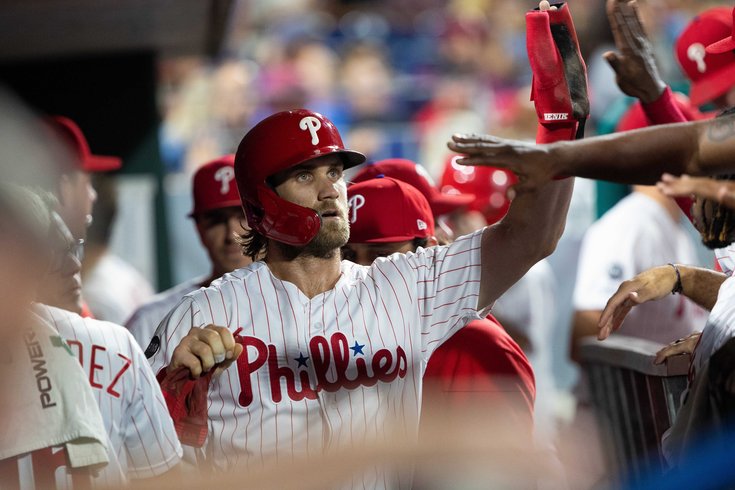 Did Bryce Harper use his clout to get Charlie Manuel hired as Phillies hitting coach?

At the same time, who doesn’t love a good conspiracy theory?

So here’s what we know: The Phillies fired hitting coach John Mallee last week and replaced him with former manager (and noted hitting savant) Charlie Manuel. And with Big Chuck sitting at the end of the dugout like some sort of baseball Buddha, they enjoyed an 11-run outburst his first night back and an improbable ninth-inning comeback the next, capped by Bryce Harper’s walk-off grand slam against the Cubs.

Here’s what we think we know: There were credible reports that owner John Middleton pushed for the move when his baseball people weren’t contemplating making changes.

And here’s what might be the rest of the story. . .or just a fever dream brought on by a good-sized dollop of Manuel Magic.

What if Middleton didn’t come up with the idea all by himself? What if somebody whispered in his ear?

What if that somebody was Harper?

Hey, it’s not out of the question. Players don’t always have input in those kinds of decisions. At the same time, it would hardly be unprecedented if that’s how it all came down.

In 1987, the Phillies got off to a slow start after the signing of coveted free agent catcher Lance Parrish raised expectations. De facto general manager Bill Giles stated flatly that manager John Felske wouldn’t be fired, even if the team finished last. By June, Giles was rethinking that commitment, but needed some cover. So he sent special assistant Paul Owens on a road trip to assess the situation and report back to him.

After the first game, in Montreal, Pope had a couple drinks with some of the beat writers in the hotel bar. When the lights came up at last call, three of the team’s veterans were waiting impatiently. They disappeared up the elevator with Owens where, it turned out, they spent the next few hours detailing what they perceived as the manager’s shortcomings.

Within days, Lee Elia was the Phillies new manager.

More recently, after Jayson Werth left the Phillies to sign a 7-year, $137 million contract with Washington, it quickly became apparent that he wielded enormous influence inside his new organization. He was a veteran who had been on winning teams and was tied up with an expensive, long-term deal. General manager Mike Rizzo valued his insights.

The first reason to suspect Harper’s fingerprints could be on this, then, is that it’s more common for the front office to take the opinions of respected players into account than most fans probably realize.

By the way, Harper made his Major League debut in 2012, the year after Werth signed with the Nationals, so he had a front row seat to observe that dynamic in action. Just sayin’.

The second bit of potential supporting evidence comes from the fact that Harper’s agent, Scott Boras, has cultivated a close relationship with Middleton. It was the owner who gladly signed off on giving Jake Arrieta, another Boras client, a three-year contract worth $75 million in 2018.

When Middleton personally flew to Las Vegas to meet Harper and his family this spring, it became an instant part of franchise lore. After signing, Harper spoke about how important it was to him to have a close relationship with ownership was.

(There’s a possible variation of this scenario in which it was actually Boras who acted as the middle man by relaying Harper’s thoughts on why the offense hadn’t consistently clicked the way almost everybody thought it would after the addition of Andrew McCutchen, J.T. Realmuto and Jean Segura even before Harper signed on. Regardless, the principle remains the same.)

Third: When a team is paying one player as much money ($330 million) over as many years (13) as the Phillies are with Harper, that player is going to have clout. All by itself, that contract makes him the focal point of the team. His opinion will carry weight.

Finally, everybody saw Harper, who hit two homers during Manuel’s first game back, ceremoniously bring the coach a cup of water during that clubbing of the Cubs. Everybody saw him happily high-fiving his teammates after his walk off the following night. . .and then almost knocking Manuel down with an enthusiastic body hug.

This could be interpreted as nothing more than the normal reactions of a player who has endeared himself to the region with his all-out style, willingness to let his exuberance show and embrace of all things Philadelphia. But doggone if it didn’t also look for all the world like a guy who had taken ownership of Manuel’s very presence.

That the Phillies finished the weekend by losing two straight to the Padres, scoring three and two runs respectively in the process, confirms what we should have already known. That it was silly to even imagine that this relatively minor shake-up was going to solve all this team’s hitting issues.

Still, the view from this vantage point is that it was the right thing to do. The only hesitation initially was that, after covering baseball for more than 40 years, I’ve learned that ownership influencing decisions at the coaching staff level is rarely a good sign.

Look, maybe Harper had nothing to do with bringing Manuel back. Maybe this was 100 percent Middleton’s idea. If so, that’s okay. He’s the owner. It’s his team. He can do what he wants. Nobody questions how badly he wants to win.

We’ll probably never know for sure. But if it turns out that Harper actually provided the impetus for a chain of events that led to the Charlie Manuel being the Phillies hitting coach the rest of the year, well, that’s even better.