Climate change activists rushed Franklin Field at halftime Saturday, calling on the university to divest in fossil fuels. Their demonstration delayed the homecoming contest by an hour 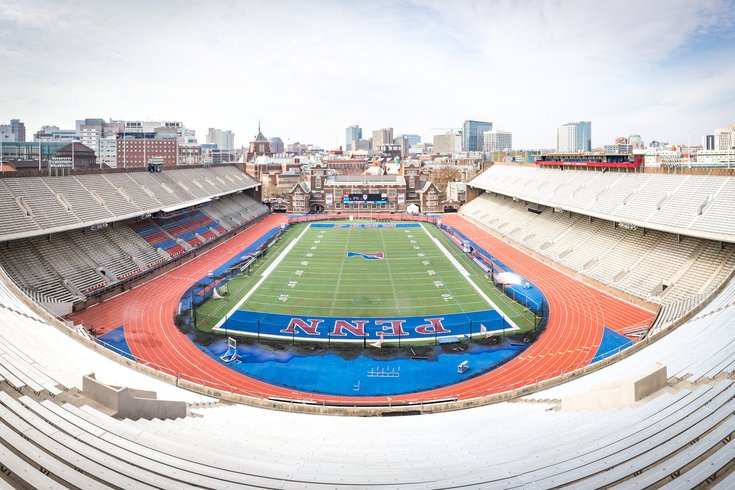 About 75 University of Pennsylvania students rushed Franklin Field at halftime of Penn's homecoming game against Yale University on Saturday to urge the school to divest from the fossil fuel industry.

University of Pennsylvania students who participated in a halftime protest at Saturday's homecoming football game, urging Penn to divest its holdings in the fossil fuel industry, say the university's response was "traumatizing."

By the end of their demonstration, 19 protestors had been arrested on charges of defiant trespassing, with further disciplinary action under consideration for allegedly violating Penn's open expression policy, they say.

"I will be honest, it was a very violent confrontation," Sabirah Mahmud, a sophomore who participated, told PhillyVoice. "If not physically, definitely mentally and traumatizing for a lot of students. The university did not respond well."

Roughly 75 students stormed Franklin Field during Penn's game against Yale University, protesting their school's alleged inaction over climate change. But the protesters, members of the campus advocacy group Fossil Free Penn, also were pushing for an investment in Philadelphia public schools, as well as aid for families in affordable housing.

The protestors' demands, as outlined in a flyer distributed at the football game, were threefold: divest the nearly $1 billion they say Penn has invested in "companies fueling climate change," stop the eviction of residents in the University City Townhomes and make payments in lieu of taxes, known as PILOTs, to Philadelphia public schools.

Penn, as a nonprofit, is exempt from property taxes. The student protestors believe the university should take those tax savings and invest them back into the community, specifically the city's public schools. As for the University City Townhomes, the protestors argue Penn has a responsibility to help the residents, since the college has bought up land in West Philly and demolished other housing there to expand its campus.

IBID Associates, the owner of University City Townhomes, chose not to renew its contract with the U.S. Department of Housing and Urban Development last year in order to sell off the property. Residents will be evicted Dec. 27.

Message from Penn students, who handed these out to fans in the stands. pic.twitter.com/YMaAAwy5uX

At halftime, protestors poured out of the stands and ran onto the field with orange banners reading, "SAVE THE UC TOWNHOMES," "PAY PILOTS" and "DIVEST" with an illustrated smokestack stamped beside it.

The group led chants of "Hey hey, ho ho, fossil fuels have got to go" and "Which side are you on?" for an hour before the majority exited to avoid arrest. This was a planned part of the action, Mahmud said, to keep international students and students seeking work visas abroad out of police custody.

Some members of the crowd cheered this exodus, the Inquirer reported. As footage from the event revealed, other spectators were more hostile. A video posted to Fossil Free Penn's Twitter account shows a man in a Yale hat attempting to tear a banner out of protestors' hands.

Students are met with violence during peaceful protest

Penn police cuffed the remaining 13 students on the field with zip ties and transferred them to the Division of Public Safety Headquarters on 4040 Chestnut St. But police made another six arrests before reaching that destination, bringing the total to 19. The detained protestors were held for about four hours, Fossil Free Penn members say, before they were released from custody. Their peers were waiting for them outside the DPS station, chanting and cheering the entire time.

"The intentional disruption of today's football game was neither an appropriate expression of free speech, nor consistent with Penn's open expression guidelines," the university said in a statement. "It delayed the start of the second half by approximately one-hour, frustrating student-athletes from both schools, disappointing fan and alumni who had come to watch the homecoming football game.

"Further, the student protestors have been afforded multiple opportunities to protest, express their concerns, and genuinely engage in productive dialogue, but have instead continued to find ways to disrupt the operations of the university. The student protestors' conduct does not advance their policy concerns and impinges upon the rights of others in the community to participate in the life of the campus."

But the students protesting that day said they felt the university had left them with no other choice. After erecting an encampment on campus and protesting for 39 days with no change in Penn's stance, they planned a new demonstration with a larger audience.

"It's just frustrating because for a university that loves to say they support their students, I definitely don't feel supported," said Mahmud, who abandoned her place in the marching band to join the protest. "I wouldn't have done any of this if they had listened. There were so many opportunities for them to listen, from emails over the summer to the encampment. We even met with them.

"They called for this, they basically asked for this. They don't want to take us seriously, so what else are we going to do?"

Mahmud says she was there when the arrested students were released and saw their citation papers. They were charged with defiant trespassing, she says, and have since received emails from Penn about potential violations of the school's Guidelines on Open Expression. A photo tweeted by Fossil Free Penn shows a student outside the Division of Public Safety Headquarters, clutching a paper stamped "CITATION." 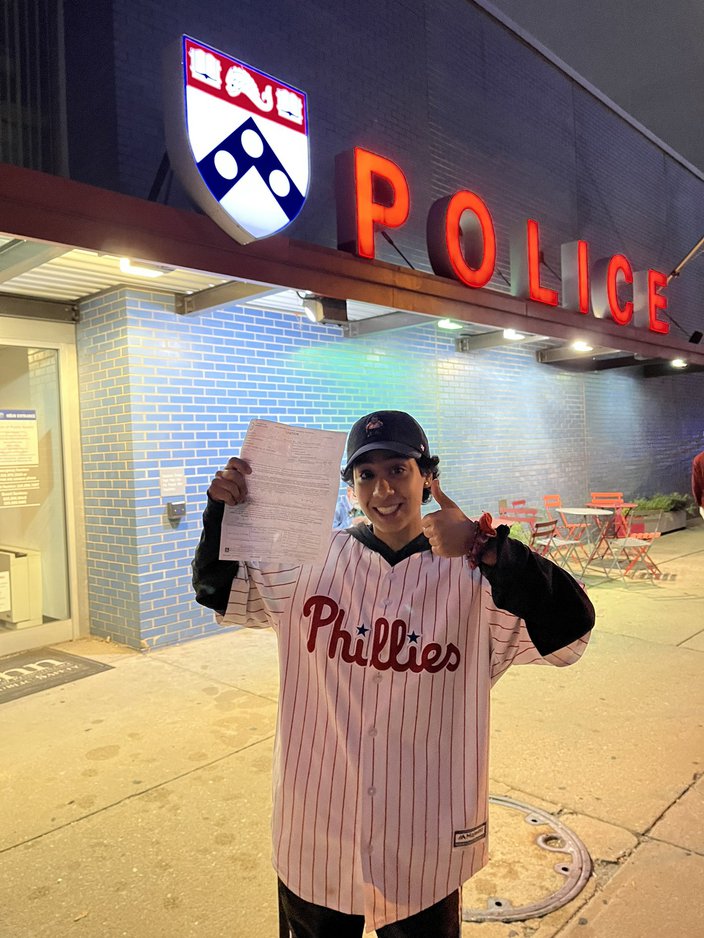 A climate change activist who was arrested by Penn police after the protest at Franklin Field is released from Penn's Division of Public Safety headquarters on Chestnut Street.

Ron Ozio, director of media relations for Penn, confirmed that 19 people were arrested; 17 of them were students. He would not comment on any charges or disciplinary proceedings brought against them.

Young climate activists have been demonstrating in increasingly public fashion over the past few months. In addition to controversial protests at art museums — a Monet painting was smeared with mashed potatoes in Potsdam, Germany and Van Gogh's "Sunflowers" got splashed with soup in London — a student group at Stanford University also apparently took the football field at halftime on Saturday to protest the school's research funding from fossil fuel companies. A tweet from the Coalition for a True School of Sustainability shows people gathered on the field spelling out "DIVEST" with their bodies. The group also tweeted out photos of protestors with signs outside Stanford's Cemex Auditorium.

.@Stanford we had fun at the halftime show! It's time to DIVEST from fossil fuels and TURN DOWN research funding from fossil fuel companies. You're falling behind @Princeton, @Harvard, and so many more. pic.twitter.com/lOeT9fndD2

— Coalition for a True School of Sustainability (@CoalitionTrue) October 23, 2022

Fossil Free Penn has ended its encampment, but fallout from the demonstration is still unfolding — for those awaiting disciplinary hearings as well as the protestors who weren't arrested. Mahmud said she has already been sanctioned by a campus club, which warned her she would be removed from future meetings.

The protestors are hopeful, however, that they can beat the trespassing charges. Their bigger concern is getting Penn to address their ongoing demands.

"They don't look at themselves."