Local 397 has been in contract negotiations since October 2020, but claims management has 'failed to take meaningful action' on important issues 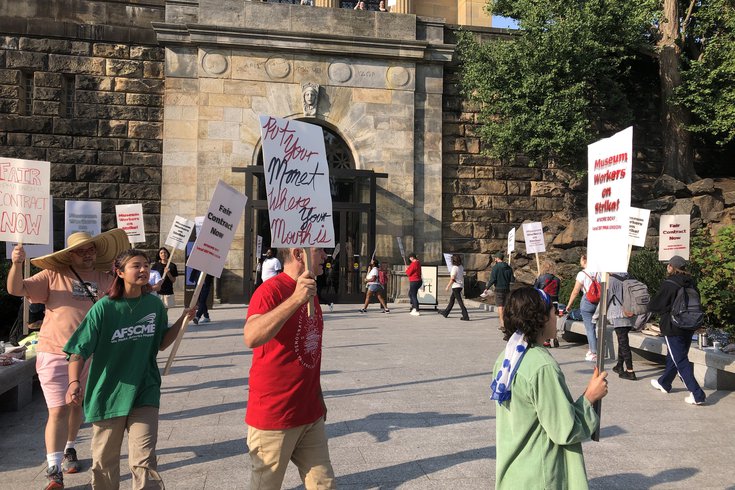 Unionized workers at the Philadelphia Museum of Art went on strike Monday in an effort to secure their first collective bargaining agreement. AFSCME Local 397 held a one-day 'warning' strike, shown above, on Sept. 16.

Unionized workers at the Philadelphia Museum of Art went on strike Monday morning in an effort to secure better wages, improved health care benefits and job security as part of their first collective bargaining agreement with the institution.

The decision to return to the picket line came after members of AFSCME Local 397 held a one-day warning strike on Sept. 16. Three weeks prior to that strike, the union filed eight unfair labor practice charges with the National Labor Relations Board, alleging that museum management engaged in union-busting tactics during contract negotiations.

Union members say museum executives have failed to remedy those unfair labor practices or come to the bargaining table with serious, meaningful offers that align with their demands. The union, which formed in August 2020, has been in contract negotiations with the museum since that October.

On Monday, Local 397 members said their decision to strike should come as no surprise to the museum, saying executives have failed to address many key economic issues important to the union.

"After two years of negotiations, our membership cannot accept further stalling and union-busting," said Adam Rizzo, a museum educator and president of Local 397. "We had hoped the museum's appointment of a new director and CEO, Sasha Suda, would signal a change in tone and that she would be more involved in helping us reach a fair agreement. Unfortunately, that hasn't happened. If the choice is between accepting the status quo or going on strike, we choose to strike. It's up to museum management to present a better option."

NO CONTRACT. NO MATISSE. https://t.co/IkmLyfRELl

Suda took the reins as the Art Museum's newest director on Monday. Previously a unionized worker at the Art Gallery of Ontario, Canada, Suda told WHYY earlier this year that she looks forward to continuing negotiations with the union and developing a collaborative culture among workers at the museum.

The art museum remained open Monday. Management vowed to continue welcoming visitors throughout the duration of the strike.

"The museum remains committed to reaching a collective bargaining agreement that is both fair to our staff and responsible for the long-term sustainability of this important Philadelphia institution," a museum spokesperson said in a press release.

Monday, September 26: The museum is open today. We are committed to serving our community as we continue to negotiate in good faith toward a fair and appropriate new labor agreement. pic.twitter.com/ZOoXsMpqjV

The union also has alleged that the museum hired temporary staff to fill previously full-time positions, thus reducing the size of the union's bargaining unit. This primarily occurred as the museum began re-staffing the facility following massive layoffs at the beginning of the COVID-19 pandemic, the union has said.

The museum's current contract offer includes job security protections for union workers. As part of the offer, the museum would not use temporary or contract workers to lay off or furlough existing full-time union employees, the museum spokesperson said.

Local 397 said the museum has yet to make an offer that improves union members' "high deductible" health care plans, which members say are so expensive that many cannot afford high quality insurance.

90% of the health care plan is paid for by the museum, which also contributes to employees' health savings accounts, the Inquirer reported.

"The museum respects the right of workers to organize and go on strike, but is disappointed that the union decided to strike despite significant wage increases and other offers made by the museum at the last negotiating session," the museum spokesperson said.

The current offer includes "accelerated" health care benefit eligibility for new hourly employees, allowing them to receive benefits up to two months earlier than they do now.

The offer also includes wages increases of 8.5% over the next 10 months and 11% by July 2024, the museum spokesperson said. Exempt employees would receive minimum salaries that are 10% higher than the current lowest annual salary.

Local 397 members said the museum's pay proposal does not address documented wage gaps between the Philadelphia Museum of Art and the standard pay at other peer museums. This pay gap was first discovered by art museum workers in 2019, when an open-source "salary transparency" spreadsheet spread widely among museum workers across the country.

"Our members will not accept a contract that does not bring wages and benefits up to an acceptable standard," AFSCME District Council 47 President Cathy Scott said. "If Board Chair Leslie Anne Miller and COO Bill Petersen believe we will accept less if they drag this out long enough, they are sorely mistaken. The past two years have only strengthened this workforce's resolve and solidarity. We are ready for what a strike means; are they?"