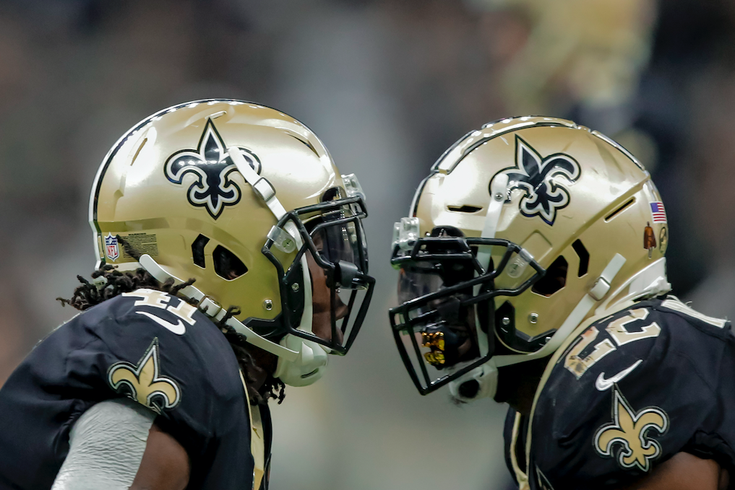 New Orleans Saints running back Alvin Kamara (41) celebrates with running back Mark Ingram II (22) after a touchdown against the Pittsburgh Steelers during the second quarter at the Mercedes-Benz Superdome on Dec 23, 2018.

The Philadelphia Eagles are flying high after their thrilling 32-30 win over the Houston Texans on Sunday afternoon.

Still alive for the last wildcard slot in the NFC playoff hunt, the defending Super Bowl champs will need some help next weekend.

They got some added motivation after Sunday's game.

As Kamara sported a ski mask of his own, Ingram insinuated that the Eagles are "fraudulents," which is 100 percent not an actual word. Not to mention, it's a funny thing to say for a guy who served a four-game PED suspension to start the season.

Alvin Kamara wore a ski mask after the game.

Mark Ingram: “There’s a lot of fraudulents out there, so we gotta let them boys know who the real ski mask shawties is.” pic.twitter.com/BKfdX3fz5a

The 13-2 Saints embarrassed the Eagles 48-7 earlier this season in New Orleans, dropping Philadelphia to 4-6 on the year at the time. The team has since gone 4-1 to keep their season on life support.

This isn't the first time Kamara has thrown shade at the Eagles. Before the start of the season, Kamara claimed the Saints would have "beat the s*** out of the Eagles" in last year's NFC title game, had they not lost to the Vikings on the final play of their divisional matchup.

Any road back to the Super Bowl for the Eagles is going to require them to return to the Superdome and take down the Saints in New Orleans. That's a tall order, but the team infamously known for Bountygate just gave the Eagles defense a mandate of its own.