But this streaky thing they have going has to end 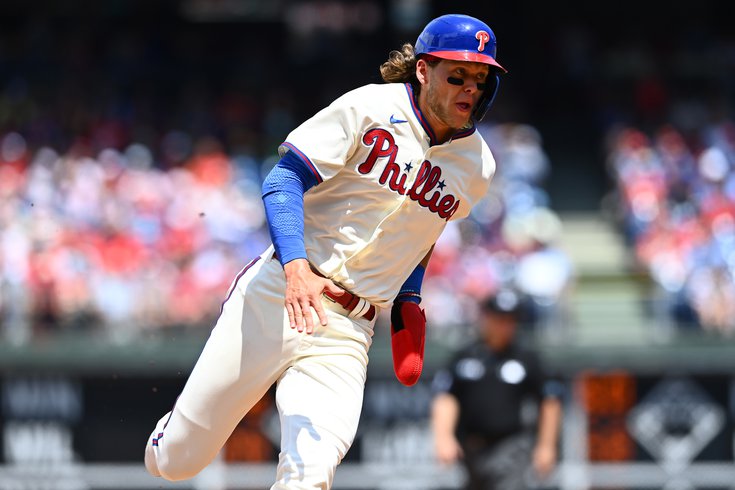 Alec Bohm is one of the best hitters in baseball so far in July.

The Phillies can be just maddening.

After heading into the All-Star Break riding high from an impressive sweep of the Marlins — a team the Phils annually falter against — Philadelphia dropped three in a row to the lowly Cubs and things appeared to be falling off the rails.

However, thanks to potent hitting from the bottom of the order and adequate pitching, the Phillies pulled off a 2-1 series win against the division rival Braves to stay on pace for the final NL Wild Card spot.

Before we turn the page to the next series, here are a few things we couldn't help but notice from their three-game dalliance with Atlanta:

• This streaky thing has to end. It's just a lot for fans to be riding high and a few days later refusing to tune in in disgust.

Here's what we mean:

Prior to the four aforementioned streaks, the Phillies found themselves within seven games of the Mets in the NL East, the closest they've been since May. Catching the Mets is all but impossible, but they did hold the Wild Card spot in their hands heading into the All-Star break before the Cubs series put them slightly behind the eight-ball.

With the struggling Pirates next on the docket in Pittsburgh for four games starting Thursday, fans surely hope the newest streak has already begun.

Bohm had seven base hits in the series against the Braves, all hitting in the bottom of the order. He has a 12-game hitting streak going.

He's also become a reliable defender after being dreadful at the hot corner last season.

"For me, it's just trying to contribute any way I can," he continued. "If I am 0-for-4 out there I can change the game on defense. As a baseball player, my mind has kind of grown a little bit."

Perhaps it's time to be less concerned with his lack of power (he has just six homers out of 98 hits this season) and put him somewhere at the top of the order where he can potentially do more damage?

• Speaking of doing damage, perhaps the Phillies have finally found a homegrown middle infielder as well. Bryson Stott has been brutally bad at the plate during stretches this season, but the rookie was a key contributor against Atlanta this week and drove in five of the team's six runs in their series-opening victory.

In all, he had four hits in the series and added a walk Wednesday. His batting average has gone up 10 points since the All-Star break and he has three homers and 10 RBI over his last 10 games.

With Jean Segura rehabbing in the minors and nearing his return, it looks like the right move might be to leave Stott at short (with Bohm at third) and have Segura play second base.

• Aaron Nola looked sluggish pitching after nine days of rest in the middle game of the series, but Ranger Suárez and Kyle Gibson pitched well enough to keep the Phillies in the first and third games. Stinkers from aces happen, and Nola should settle down when he gets back into his routine.

Zack Wheeler will pitch on Thursday, with Bailey Falter, Suárez, and then Nola to follow to wrap up the four-game set against Philly's in-state rivals. Remember, this team has one of the weakest schedules remaining in all of baseball, and they'll need to forget their struggles against the Cubs from this past weekend when they try and dominate a lesser opponent again this weekend.

• The bullpen was fine against the Braves, which is a measuring stick they'll need to surpass in order to contend this summer and fall. They allowed just one run each in the first two games and gave up none in relief of Gibson in the series finale.

• Speaking of the bullpen, the Phillies series against the Pirates will be the last four games the club plays before the trade deadline, as they have an off day this coming Monday and the deadline is Tuesday afternoon, August 2. It doesn't seem likely that any scenario can play out in Pittsburgh to have the team not acting as a serious buyer at the deadline, but a series win will definitely help justify moves made to enhance the pen, rotation and perhaps the outfield as they attempt to end a postseason drought a decade old.