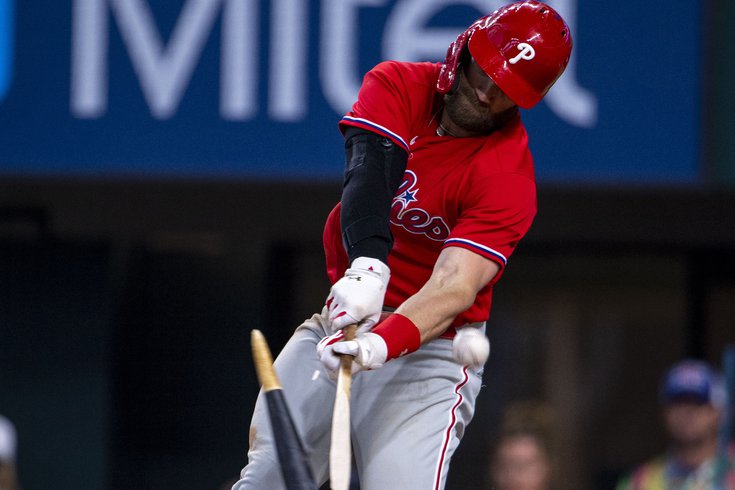 Bryce Harper has been playing through pain all season long.

The Phillies dropped a pair of games in Texas this week, marking the first series loss for the team since the dismissal of Joe Girardi and the first three-game losing streak since last month.

Bouncing back will be quite the task, and here's why:

• Bryce Harper is some kind of robot that can still mash the ball no matter what parts of him happen to be broken. He has the elbow injury that is keeping him relegated to the DH spot but also has some kind of ugly infected blister — one that kept him out of the series opener against the Rangers. He still managed to pick up a walk and base hit in Wednesday's 4-2 loss, raising his season batting average to .326, a team-best mark.

• In what is admittedly a small sample size from the series that wrapped Wednesday, the Phillies hit .169, scored just two runs, and were outscored 11-2. In many of their losing efforts earlier this season the offense was at least a factor. They were not in this series. Their season average is .247.

• The only real offensive bright spot in the series vs the Rangers was Kyle Schwarber, who has ridiculously reached base in every game this June, and has a base-reaching streak stretching back to May 25. Since that date his batting average has improved 17 points and his on base percentage 31 points. Remember what Jonah Hill taught us in Moneyball — a walk is as good as a hit. He also has the second-most homers in the NL.

• Three games in a row in the loss column certainly qualifies as a slump. Zack Wheeler wasn't awful but couldn't get through the fifth inning Wednesday, a day after Kyle Gibson pitched into the seventh and was relieved by Jeurys Familia who gave up four runs. Both hurlers kept the Phillies in winnable games but the offense was nowhere to be found.

• The schedule was easy during their recent stretch of success. So far in June, Philadelphia has gone 15-5, firing off nine and four-game win streaks. Their wins were over four teams with losing records, plus an impressive sweep of the wild card contending Brewers.

In their next three series, the Phillies will be facing the Padres four times out west (44-27), followed by the Braves (40-30) and the Cardinals (40-31) at home. If the season ended today, all three of them would be in the postseason. The Phillies would not.

Philly was able to rebound and make a push for relevancy after the manager shakeup in large part due to a soft schedule. It's going to be tougher to rebound this time, and seeing if they can walk away from the next 10 daunting games with a winning record will be very telling as we continue to gauge whether the Phillies can truly end their decade-long playoff drought.

• Ranger Suarez and Aaron Nola are slated to start the first two games of the Padres series, but a knee injury to Zach Eflin has his start in jeopardy in Game 3. The Phillies will face Joe Musgrove (8-0, 1.59 ERA), MacKenzie Gore (4-3, 3.64 ERA) and Yu Darvish (7-3, 3.17 ERA) in three of the four games in the series to come. Good luck with that.