Despite losing 2 of 3 to the Mets, the Phillies look like they're starting to settle in 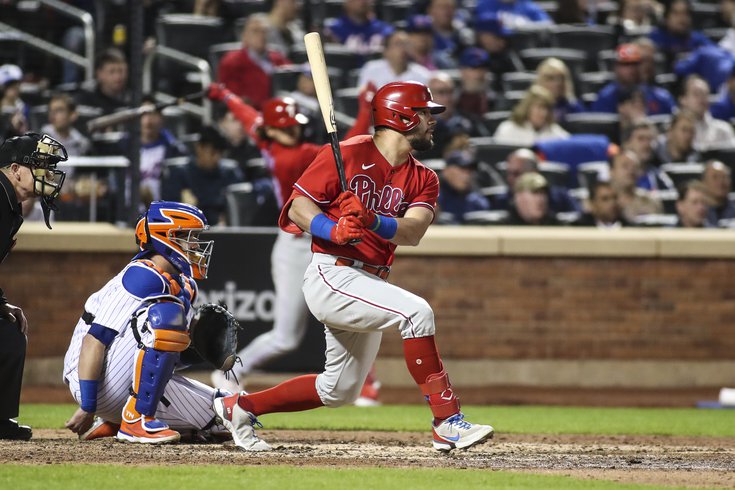 The Phillies dropped 2 of 3 to the Mets over the weekend, but Kyle Schwarber had himself a series.

The Phillies absolutely crushed the Rockies in a four-game home sweep. Everything was good.

Then they went up to Queens, and the lineup built to hit...was no-hit. That was bad. A 4-1 win the next night thanks to bombs from Kyle Schwarber and Rhys Hoskins made things better, but ultimately, the Phillies dropped 2 of 3 to the division rival they'll have to chase down for the NL East pennant.

Ranger Suárez will start against the Rangers because baseball is beautiful.

But before that happens, let's take a look at where the Phillies stand in the latest wave of power rankings:

Being on the receiving end of that combined no-hitter was brutal. But the Phils will move on, and while it may not look it after the series against the Mets, they are starting to settle in a bit and moved two spots up The Athletic's power rankings.

"Combined no-hitters are the ultimate indignity. This is a baseball truism that will only get more obvious in the future. With a standard no-hitter, you can chalk it up to sheer dominance from the other guy. With a combined no-hitter, the story shifts to a team that simply couldn’t get a hit, regardless of the look that’s thrown at them.

"The Phillies will move on, as all teams do, because a shift in momentum is always a game away in this silly sport, and the roster should hit. It’s also worth noting that the defense has been average, according to the numbers. Not apocalyptic, and not even bad. Perfectly average.

"If the defense can be average, and if Zack Wheeler can rediscover his superior command, there might be something here.

"A couple hits every so often would help, though. That is my professional baseball analysis." [The Athletic]

The Phillies took a much bigger climb up Bleacher Report's rankings though, jumping ahead seven spots to 17. Again, they're starting to settle in.

"The Phillies swept a four-game series with the Colorado Rockies at the start of last week, outscoring them by a 32-9 margin. They followed that up with a series loss to the New York Mets, but they're trending in the right direction after a rocky 4-8 start to the season. Zack Wheeler seems to be rounding into form after six scoreless innings last time out, and their rotation still has the potential to be one of the best in baseball." [Bleacher Report]

They'll get another shot

And hey, any week that includes a four-game sweep is a good week. Besides, they'll have another shot at the Mets in a couple of days and can make up some serious ground.

"That's a great week, even with the series loss in Queens. They'll get a home crack at the Mets this next weekend. Four games worth." [CBS Sports]

The Phillies saw a jump over at FanGraphs too, again because of the sweep of the Rockies, but also because the defensive lapses have been kept pretty well in check.

"After Alec Bohm told us that “I f—ing hate this place” on April 11 (Bohm apologized and was met with a standing ovation the next night), the Phillies lost nine of their next 12 games. They managed to get their season back on track with a four-game sweep of the Rockies last week before running into the Mets over the weekend. Before allowing 10 runs to score on Sunday night, they had allowed fewer than five runs in eight of their last nine games. And although Bryce Harper has been relegated to DH duty due to an injured throwing elbow, the Phillies haven’t suffered many of the same defensive lapses that led to Bohm’s original frustration all those weeks ago." [FanGraphs]

Hey, you take production however it comes.

"Seven of Kyle Schwarber’s 15 hits this season have gone for home runs, and three have been doubles. That’s how you get a ludicrously funny slash line of .200/.318/.520 through 21 games." [Sports Illustrated]