The Board of Health voted to reverse the mandate, citing improving COVID-19 metrics, only four days after it had been reimplemented 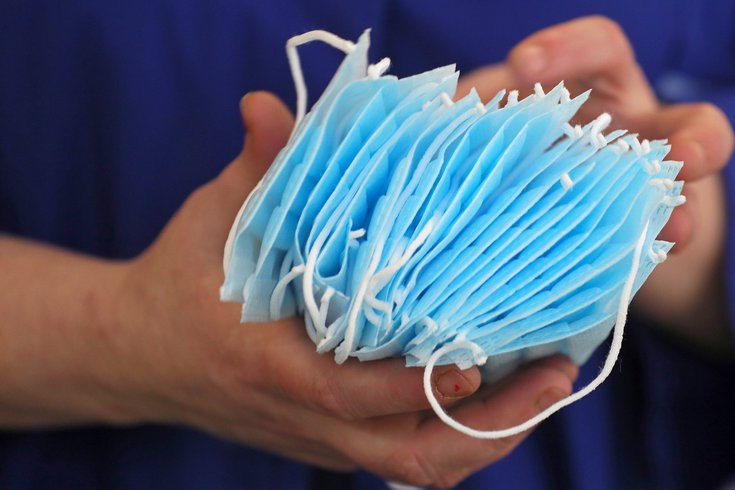 Philadelphia lifted its indoor mask mandate on Friday, ending the requirement less than a week after the COVID-19 mitigation measure took effect. The reversal came after backlash among residents and a lawsuit filed by a group of businesses challenging the legality of the policy.

Health Commissioner Dr. Cheryl Bettigole announced the decision Friday morning after the city's Board of Health voted Thursday night to remove the mandate. Instead, the city will now strongly recommend that people wear masks and will abandon the tiered COVID response level system that triggered the mandate earlier in April.

Bettigole insisted that the decision to remove the mandate was based on decreasing hospitalizations and a leveling of case counts, rather than public pressure. Philadelphia had been the only large city in the U.S. to reintroduce a mask mandate this spring.

"I had said when I announced this (on April 11) that if we didn't see hospitalizations rising, that we needed to rethink this and that we shouldn't have a mandate in that case," Bettigole said. "That's what we're doing today. It is a very short span of time because that's the time we needed to see what was going to happen next. We didn't want to miss the chance to interrupt a serious wave."

The city's mask mandate took effect on April 18 after a weeklong period was given to allow people and businesses to adjust. The mandate had covered restaurants, schools and other indoor businesses and venues. Face coverings have been mandated in health care settings throughout the pandemic and will continue to be required there.

Statistics the health department released Monday showed COVID-19 infections rose to a peak of 377 cases on April 14 and then leveled to 242 new cases per day by April 21. Hospitalizations peaked at 82 COVID-19 patients on April 17 and had declined to 65 on April 21.

Bettigole suggested Friday that the city's initial announcement of the mandate on April 11 was effective on its in own in slowing down infections and hospitalizations, allowing the health department to remove the mask requirement quickly after it took effect.

Philadelphia will now move away from the COVID response level system that had automatically triggered the mask mandate in favor of an approach based on discretionary public recommendations that follow similar metrics.

The mandate had returned in Philadelphia despite differing guidance from the U.S. Centers for Disease Control & Prevention. The CDC has shifted primarily to hospitalization metrics as a measure of whether restrictions, such as mask mandates and other policies, should be put in place.

In Philadelphia, the health department's mandate was partly a preemptive response to the now-dominant BA.2 omicron variant, which accounts for more than 85% of new cases in the country. BA.2 is a more contagious omicron variant that spreads about 30% more easily and is believed to be more effective at evading the immune system, according to studies.

The city's mask mandate specifically was triggered by the benchmarks of the health department's four-tier COVID response level system. Philadelphia had moved from the "All Clear" tier to the "Mask Precautions" tier earlier in April because of metrics that include a combination of case counts, hospitalizations and the rate of growth in new infections during 10-day intervals.

Using this system, Philadelphia's benchmark for the Mask Precautions level was met in April because the city's COVID-19 data reached at least two of these thresholds:

Bettigole explained Friday that the city will still use some of these metrics to guide decision-making, but will no longer rely on automatic triggers to determine policy. The health department does not plan to create a new system to replace the four tiers. It will instead favor a more situational, ongoing review of data to help guide recommendations and will use the CDC's guidance as a factor in weighing the appropriateness of restrictions.

In the event of a major new variant or a severe increase in cases and hospitalizations, the city will not rule out considering mandates and other restrictions.

"I think if were seeing a similar kind of wave to what we're seeing, we don't think we need a mandate. And we're saying we're saying we're not going to use these response levels that we previously created because we don't need to at this point," Bettigole said. "Does that mean we would ever have a mask mandate? I think it depends what happens. If there's some very severe new wave hitting Philadelphia, I don't want to ever say that we wouldn't do anything, but we're not anticipating that, given the current situation."

On Thursday, hours before the Board of Health voted to rescind the mandate, Mayor Jim Kenney defended the city's mask policy to the Washington Post.

"Our belief is that wearing masks again will tamp down the case counts and hospitalizations, and allow us to continue to reopen and to get back to more normalcy," Kenney said Thursday, hours before the Board of Health's vote to rescind the mandate.

Philadelphia policy reversal comes after a federal judge in Florida on Monday threw out a nationwide rule requiring passengers and staff wear face coverings while on public transportation. That prompted SEPTA to scrap its own mask mandate just as Philadelphia temporarily brought the citywide indoor mandate back. The CDC has pushed back against the federal ruling on public transportation, insisting that masks remain necessary in these settings, and the Justice Department has appealed the decision.

"This is not a free-for-all take off your masks," Bettigole said. "This is a — we are strongly going to recommend this rather than require it because that is going to work in Philadelphia right now."