Amid local backlash and a lawsuit to stop the requirement, the mayor stood by the city health department's decision 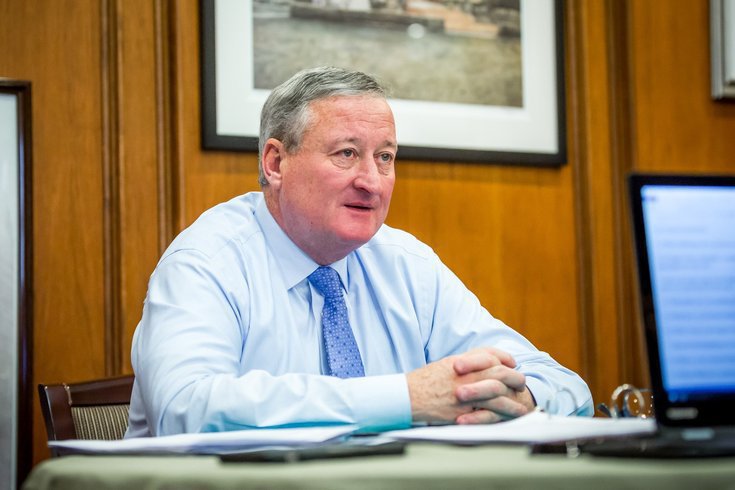 A spokesperson for Mayor Jim Kenney confirmed Thursday night that the city will rescind the city's mask mandate. The Board of Health voted Thursday to reverse course just four days after the mandate took effect.

"Due to decreasing hospitalizations and a leveling of case counts, the city will move to strongly recommending masks in indoor public spaces as opposed to a mask mandate," deputy communications directory Sarah Peterson said. "Given the latest data, the BOH voted to rescind the mandate."

The city plans to provide more details about the decision on Friday.

Philadelphia Mayor Jim Kenney pushed back against criticism of the city's COVID-19 mask mandate on Thursday, defending the health department's policy against what he called the "politicalization" of the pandemic. Philadelphia is the only large city in the United States to bring back a mask requirement this spring.

Kenney spoke about the mask mandate and other issues in Philly during a live interview with the Washington Post's Paige Winfield Cunningham, who questioned the mayor about the divisive health measure.

Philadelphia's mask mandate returned this week despite differing guidance from the U.S. Centers for Disease Control & Prevention. There has been a shift away from such measures, even among Democratic leaders in Pennsylvania and in other states and municipalities.

Attorney General Josh Shapiro, Pennsylvania's lone Democratic candidate for governor, questioned the wisdom of Philly's mask mandate when asked about it last week. Kenney said he supports Shapiro and reduced the skepticism to optics in an election year.

"He is running in a state that's not necessarily always blue, coming from an area of the state that is blue," Kenney said. "Sometimes you have to take positions that (you don't necessarily) agree with, but I'm still supporting him. I think he's the best candidate for governor we have out there."

The mask mandate in Philadelphia was welcomed with backlash locally and has prompted a lawsuit from a group of businesses that are challenging the policy's legality in Commonwealth Court.

"Our belief is that wearing masks again will tamp down the case counts and hospitalizations, and allow us to continue to reopen and to get back to more normalcy," Kenney said Thursday.

The mayor admitted that the policy was a step the city hoped not to have to take, but he reiterated that his stance throughout the pandemic has been to follow the recommendations of his health department.

Earlier in April, the city surprised many observers when Health Commissioner Dr. Cheryl Bettigole announced that the mask requirement would return in indoor spaces where it had previously been lifted following the winter surge in omicron cases.

The health department's policy changes were partly a preemptive response to the now-dominant BA.2 omicron variant, which accounts for more than 85% of new cases in the country. BA.2 is a more contagious omicron variant that spreads about 30% more easily and is believed to be more effective at evading the immune system, according to studies.

The mask mandate specifically was triggered by the benchmarks of the health department's four-tier COVID response level system that was developed in order to inform such policies in a transparent manner. The city moved from the "All Clear" tier to the "Mask Precautions" tier based on metrics that include a combination of case counts, hospitalizations and the rate of growth in new infections during 10-day intervals.

In contrast, the CDC's guidance has shifted primarily to hospitalizations as an indicator of whether restrictions, such as mask mandates and other policies, should be put in place.

"When we exceeded those benchmarks, we either had to live up to those metrics or not," Kenney said.

A federal judge in Florida on Monday threw out a nationwide rule requiring passengers and staff wear face coverings while on public transportation, opening the door for SEPTA to scrap its own mask mandate just as Philadelphia brought the indoor mandate back. In this case, the CDC has pushed back against the federal ruling, insisting that masks remain necessary on public transportation, and the Justice Department has appealed the decision.

Questions about where masks should still be used — and whether common cloth masks are even effective against the latest COVID variants — have led to inconsistent messages from health authorities. Grumbling about masks, long associated with a defiant Republican sphere, has lately reflected a more general fatigue over the pandemic. Public sentiment seems to now widely favor leaving people to choose when and whether to wear face coverings, barring evidence of major spikes in hospitalizations or changes in the virus that demand tougher countermeasures.

Others tend to agree with Kenney that the issue is overblown, regardless of scientific ambiguity, and that masks are a minor precaution to use in settings where viral transmission is most common. Philadelphia officials have consistently said that this most often occurs within households, where people are least likely to wear masks, but indoor spaces such as businesses and restaurants also pose higher risks.

Kenney claimed Thursday he's not in a place to judge the choices made by other cities and states regarding masks. He argued the mandate in Philly is intended to prevent the need for tougher measures.

"We just believe that taking this very minor precuation of wearing a mask is easier than slipping backwards into lockdowns and other types of restrictions that we don't want to go back to," Kenney said.

Masks have proven to be anything but minor throughout the pandemic, and Philly's unpopular move to mandate them again has led to a torrent of complaints with the health department and signs of weak compliance thus far. At the Wells Fargo Center, where the Sixers' Monday night playoff game marked the first day of the mandate, fans were mostly seen without face coverings. Some in favor of the measure took notice and complained about it.

I asked #Philadelphia Department of Health regarding the fans at the #Sixers playoff game on Monday at Wells Fargo Center that were not wearing masks as the mask mandate went back into effect#COVID19 #PhilaUnite #NBAPlayoffs pic.twitter.com/BVaX7bcGZ5

"I'm sad to say that this nation has devolved into a selfish bunch who want what they want for themselves and are sometimes not willing to help each other out as Americans," the mayor said.

As of Monday, there were 82 patients hospitalized with COVID-19, including eight on ventilators. The city averaged 224 new cases of COVID-19 per day over the previous two weeks, up from an average of 142 per day between March 28-April 11. There were 46 people being treated for COVID-19 in Philadelphia hospitals on April 11.

Critics of the mask mandate believe these metrics, though increasing, are still around the lowest they've been throughout the pandemic.

But on Thursday, Kenney characterized the opposition as a symptom of politics.

"We circulated those metrics to the business community and there was almost universal agreement that these were good metrics — that they were transparent and dependable," Kenney said. "And then when we abided by the metrics, people complained. I just think that we're in this environment where people will complain about just about anything that we do or that a government does to keep people safe."

Kenney, who is completing the end of his second and final mayoral term, also was asked about the city's gun violence epidemic and the opioid crisis. The mayor has not always been as symbolically ready to acknowledge the toll of violent crime during the pandemic, most notably last summer when he resisted joining City Council in declaring gun violence a citywide emergency.

The differences between Kenney's approach to the pandemic and shootings come down to what he thinks the city can concretely do about each of these issues. The city's COVID-19 policies have largely been independent of the state's discretion during the pandemic and have typically been stricter, due to the size and vulnerabilities of the population. Violence prevention requires more cooperation from leaders in state government.

"Philadelphia is located in a state where it's harder to get a driver's license than it is to get a gun," the mayor said, adding that Pennsylvania's gun laws have made it hard to control the flow of guns into the city. The Kenney administration has sued the state over its preemption of local gun laws that the city believes would help limit shootings.

On the opioid crisis, Kenney said his administration hopes that the federal court ruling to block the opening of an overdose prevention site in the city ultimately will swing the other way, allowing Philadelphia to move forward with a plan similar to what has been tried in New York City.

"The Biden Justice Department is much more realistic about the conversation," Kenney said. "They have not endorsed it, nor do I expect that they're going to endorse it, but they're at least willing to talk to us about a set of guidelines and rules that need to be followed — from community standards to police strategy standards and how it would operate. We're not there yet. They're open-minded and cooperative — helpful, as a matter of fact. We'll see where we end up. I just want to keep people from dying and give them an opportunity to recover."

Despite the harsh reaction to the mask mandate, Kenney believes Philadelphia's response to the pandemic thus far has worked well. He touted the city's improving employment rates, more than 30 planned restaurant openings this spring and the gradual return of office workers to Center City as signs that the city has effectively navigated the crisis. He hopes the mask mandate is only in place for a brief period of time.

"We're getting back to normal," Kenney said.

The health department reviews all relevant COVID-19 metrics every Monday to determine Philadelphia's response level. Overall pandemic conditions also are considered to evaluate whether changes to the health department's benchmarks may be necessary.

Asked whether he expects compliance with the mask mandate to be weak, Kenney said he's more concerned with promoting behaviors that aid public health.

"I'm tired of 5,000 people dying in our city from COVID-19 — and we want to try to avoid any more loss of life," Kenney said. "We have people who are susceptible to disease because of other co-morbidities and other health issues. I just would hope that people would want to care about each other more by making a small sacrifice to keep the elderly, children, and people with pre-existing conditions safe."