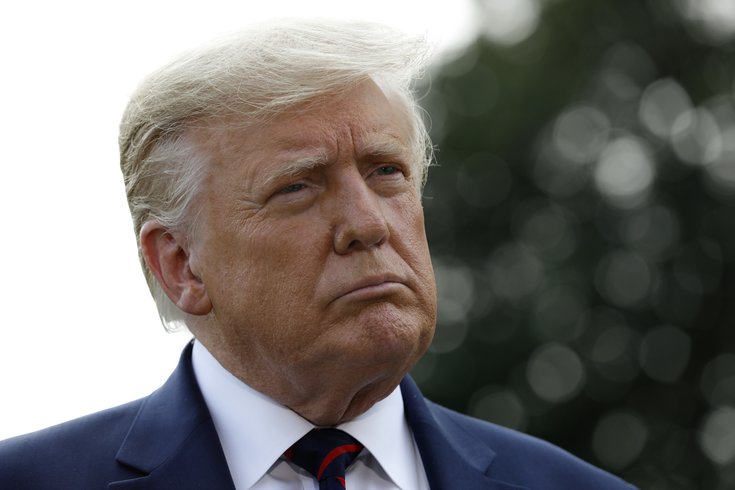 President Donald Trump said his administration could not have done anything more to slow the spread of the coronavirus, calling the public health crisis the most difficult aspect of his presidency.

"I think we did a very good job," Trump said during a town hall event held Tuesday night at the National Constitution Center in Philadelphia.

The public health crisis was among various topics Trump addressed during the event hosted by ABC News anchor George Stephanopoulos.

The socially-distanced attendees were made up of a mix of undecided voters who had either cast their ballot for Trump or Hillary Clinton in 2016, as well as some who supported neither candidate. The questions they posed to Trump covered a wide variety of topics, including the public health crisis.

Nearly 200,000 Americans have died of COVID-19 – easily more than any country. The United States' per capita death rate is among the highest in the developed world.

Trump claimed that the U.S. is "rounding the corner" in its fight against COVID-19, suggesting the virus "is going to disappear" upon the arrival of a vaccine and the development of herd immunity.

.@GStephanopoulos presses Pres. Trump on his claim that the U.S. is doing better in mortality when it comes to COVID-19 than other countries: “We’re not at the top of the list.”

Health experts are optimistic a vaccine will be ready by early next year, but its rollout could be a lengthy due to the challenges of producing such a large quantity.

Trump has suggested a vaccine could be ready by Election Day, but nine drugmakers, including AstraZeneca, Moderna and Pfizer, have vowed they will not submit vaccines for federal review until clinical trials have shown them to be safe and effective.

The U.S. has had 6.6 million confirmed COVID-19 cases – and many that went undiagnosed – but that total is nowhere near the threshold for achieving herd immunity. Health experts believe at least 60% to 80% of the U.S. population needs to have developed COVID-19 antibodies or been vaccinated to achieve herd immunity.

.@GStephanopoulos presses Pres. Trump on his claims that COVID-19 will "disappear."

Stephanopoulos: "It would go away without the vaccine?"

Pres. Trump: "Sure, over a period of time. Sure, with time."

Amid reports that he intentionally downplayed the severity of the coronavirus to the American people, Trump said he didn’t want to scare the public.

"I don’t want to drive our nation into a panic," Trump later said. "I’m a cheerleader for this nation."

The first question in tonight's @abc2020 town hall comes from a 2016 Trump voter who's diabetic: "I thought you were doing a good job with the pandemic response...then you took your foot off the gas pedal. Why did you throw vulnerable people like me under the bus?" pic.twitter.com/iGEyqMFsNv

Trump also addressed the role of the police, racism, the economy, health care and immigration. At the end of the event, Trump said the COVID-19 pandemic has been his biggest challenge.

"It's been very difficult, it's been so sad," Trump said. "It’s just a sad situation."

"I learned that life is very fragile," Trump added. "I knew people that were powerful people, strong people, good people, and they got knocked out by this, and died — six people."

"What has been the most difficult part of your presidency?" an uncommitted voter asks in special @abc2020 town hall.

Pres. Trump says COVID-19: "It's been very difficult, it's been so sad." https://t.co/5rferlTBvn pic.twitter.com/qKpRYOVeiW

Trump’s visit to Philly was his second to Pennsylvania in the last seven days. He visited the Flight 93 memorial in Shanksville to mark 9/11 on Friday, as did Democratic presidential nominee Joe Biden.

Before heading back to Washington, D.C., Trump picked up a pair of Philly cheesesteaks for the flight home. It’s unknown where Trump stopped, but he appears to prefer provolone over cheese whiz.

Great to be back in Philadelphia. Thank you Pennsylvania, see you again soon! #MAGA pic.twitter.com/l82C4TdlAE

Biden will hold a town hall event with Pennsylvania voters in his hometown of Scranton on Thursday night. The socially-distanced event will air on CNN at 8 p.m. and be hosted by Anderson Cooper.

Democratic vice presidential nominee Kamala Harris is expected to campaign in Philly on Thursday. She will be making her first trip to the city since being tapped as Biden’s running mate. The specific details of her trip, including where and when she will appear, have not been announced.

Given Pennsylvania's status as a swing state, it's likely the candidates will campaign here again before the Nov. 3 election.

Polling indicates that the race for Pennsylvania’s 20 electoral votes will be close. Biden currently leads Trump by an average of over 4 points, according to Real Clear Politics.

In a recent NBC News/Marist College poll of likely voters, Biden leads Trump by 28 points in the Philly suburbs. Biden’s advantage there is a significant jump from four years ago when Clinton won Philly’s suburban counties by 13 points, according to the New York Times.