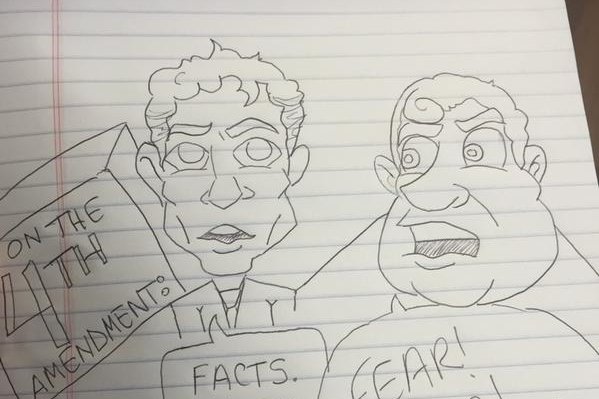 It should come as no surprise that Donald Trump dominated the headlines not only immediately following Thursday's Republican debate but in the days that followed as well.

However, New Jersey Governor Chris Christie got some attention for a heated exchange he got into with U.S. Senator from Kentucky Rand Paul over NSA surveillance.

Paul, quite famously, has opposed the agency's collection of bulk phone records in order to prevent a terrorist attack. Paul's attempt to block the reauthorization of the Patriot Act in accordance with that position drew the ire of Christie in July, who said the senator should be held accountable, and appear before congressional hearings, should the U.S. be attacked.

The two sparred over the issue during Thursday night's debate in Cleveland.

On Saturday, Paul followed up the dispute by tweeting out a cartoon of the exchange, mocking Christie's position and asking supporters to send in their own drawings. (h/t, the Washington Post)

Can you draw? Send us your impression of my defense of the Bill of Rights during the debate. Use #standwithrand pic.twitter.com/RHCsqUDezt

Paul then tweeted out several cartoons drawn in the same vein.

Another came in from Instagram! Send in your drawings of the debate exchange w/Christie. Use #standwithrand pic.twitter.com/qrkzjLmHAF

Others carried Paul's social media torch and tweeted their drawings as well.

Christie has been silent on Twitter regarding the cartoons