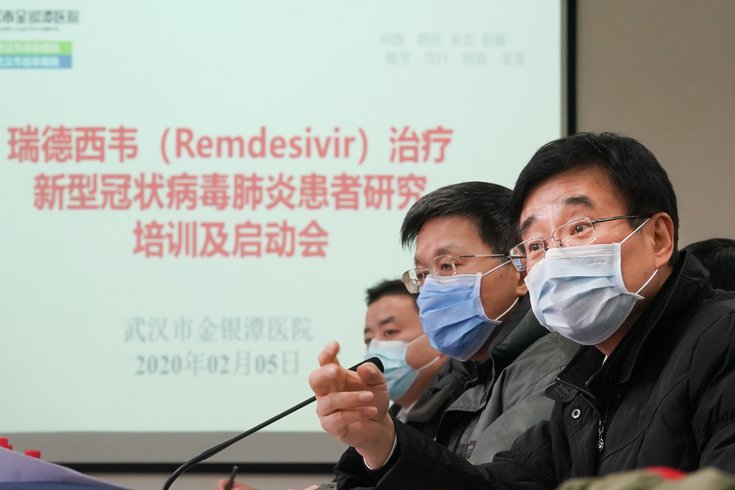 Despite high hopes, the first clinical trial data released on remdesivir showed no significant benefits for COVID-19 patients. Above, Wang Chen, president of the Chinese Academy of Medical Sciences, speaks at a conference in Wuhan before the trial began in February.

The antiviral drug remdesivir might not be an effective treatment for COVID-19 despite high hopes, according to data from a much-anticipated clinical trial conducted in China.

Scientists believe remdesivir acts directly on the coronavirus while other potential therapies instead focus on reducing the body's autoimmune response to the infection. The drug originally was designed to treat Ebola, but is has been repurposed for use in COVID-19 patients.

The data from the clinical trial accidentally was posted Thursday to the World Health Organization's website and then quickly removed – but not before STAT News saw it.

"A draft manuscript was provided by the authors to WHO and inadvertently posted on the website and taken down as soon as the mistake was noticed," WHO spokesperson Daniela Bagozzi told STAT News. "The manuscript is now undergoing peer review and we are waiting for a final version before WHO comments on it."

The study summary stated that at the one-month mark, 13.9% of the 158 patients in the redmesivir arm of the trial died compared to 12.8% of the 79 patients in the placebo arm. The difference was considered not statistically significant. The drug had no significant effect on reducing the viral count in patients' bloodstreams either.

But Giliead Science Sciences, which manufactures the drug, said the summary doesn't show the whole picture regarding the drug's potential benefits.

Because of the small number of patients enrolled – only 237 – and the fact that the trial was stopped early, "statistically meaningful conclusions" are not possible, Gilead Chief Medical Officer Dr. Merdad Parsey said in a statement. But Parsey said the data shows some promising trends among patients who received the drug early in the disease's progression.

Various other drugs and therapies also are being tested as potential COVID-19 treatments, including nitric oxide – the gas that led to Viagra and plasma donations from COVID-19 survivors.  Several drugs, like hydroxychloroquine, Arbidol and lopinavir/ritonavir have yielded mixed results.

The Chinese clinical trial is not the only study investigating remdesivir for use in COVID-19 patients, so it is not completely out of the running as potential treatment.

Gilead is conducting its own research on patients with severe and moderate disease. Other remdesivir trials include one led by the National Institutes of Allergy and Infectious Diseases and local trials led by Penn Medicine.