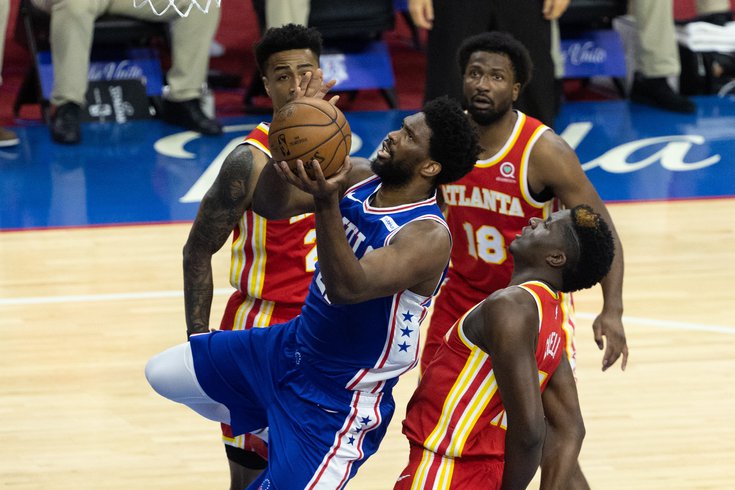 UPDATE [7:02 p.m.] — Good news, Sixers fans (and anyone tuning into this game, really). Center Joel Embiid (knee), who found out on Tuesday night that he would not be named the 2021 NBA MVP, will play in Game 2 against the Hawks.

Heading into Game 1 of the Sixers' Eastern Conference semifinal series against Atlanta, Philly was riding high. They had just gotten word that star center MVP candidate Joel Embiid was going to start — before he was joined by Triple H for a pregame ringing of the ceremonial bell — and their team was a massive favorite against the fifth-seeded Hawks, both in the opener and in the series.

Then the game started.

Following forty-eight minutes of what for the most part could only loosely be described as basketball — in which the Sixers took their fans on a roller-coaster tour of every emotion under the sun — Philly ultimately fell short in the comeback attempt and found themselves suddenly down 1-0 and no longer in possession of the home-court advantage they worked so hard all season to earn.

For the most part, they had only themselves to blame, whether it was turnovers, questionable lineup decisions or a poor defensive effort against Trae Young and Co., especially in the first half when they quickly fell behind. Now, they find themselves in a must-win situation. Otherwise, they'll wind up going to Atlanta down 2-0 with a chance for their season to be over before they ever return home.

That's the nightmare scenario, and we're hardly there yet. Teams who lose Game 1s at home have a great track record of bouncing back in Game 2 — including the Sixers themselves.

The Sixers have won the last FOUR playoff series in which they lost Game 1 at home . . .

Will they continue that trend even the series in Game 2 on Tuesday night (7:30 p.m., TNT) or will the city of Philadelphia be sent into a collective panic? There's only one way to find out...