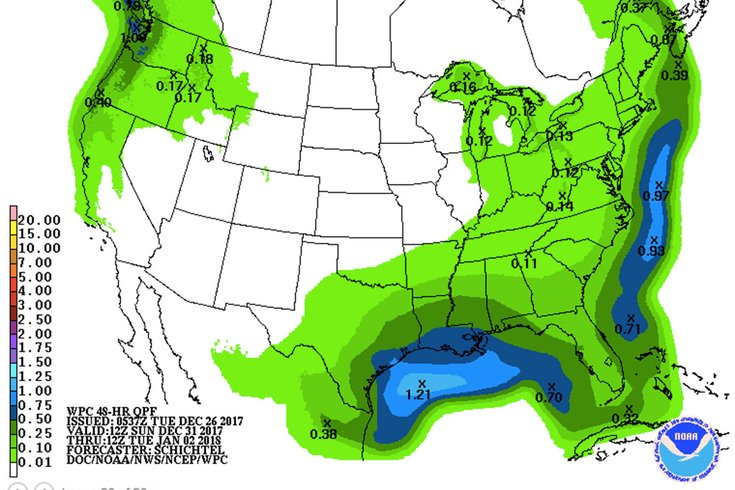 This NOAA precipitation forecast map for Dec. 31 to Jan. 2 shows a coastal storm off the Mid-Atlantic.

A still-developing weather picture has the potential to ring in your long holiday weekend plans with some snow.

One thing's for sure, however: the Arctic air that blew into the region on Christmas morning continues to build. As a result, it will remain very cold for the rest of the week, with low temperatures dipping into the single digits in the northern and western Philadelphia suburbs, and into the teens to low 20s in the city and places south and east.

Thursday looks to be the coldest day of the week, as temperatures remain some 15-20 degrees below normal. Those preparing to ring in the new year in the Poconos could see wind chills as low as 15 below zero. In the Philadelphia area, wind chills could be in the single digits to as low as 5 below zero.

The Camden County Health Department has issued a Code Blue advisory for the nighttime hours through Thursday morning.

National Weather Service forecasters say a weak low pressure system will pass through at the end of the week, and could develop into a stronger system offshore.

So far, weather models have "stark differences" on predicting what the long holiday weekend will bring, according to forecasters.

The Global Forecast System (GFS) model sees a weak clipper system passing through the region on Friday, with low pressure forming well offshore on Friday night, before high pressure builds into the area on Saturday, followed by another weak clipper Saturday night. The GFS model then sees a low pressure system forming off the Southeast on New Year's Eve and New Year's Day.

According to the European model, however, the clipper system's arrival is delayed, till late Friday night. It then sees conditions favorable for the approaching clipper system to produce a more significant coastal low over the area Saturday and Saturday night.

Another model sees the clipper system passing through on Saturday and intensifying offshore on Sunday.

Which is to say that forecasters have low confidence in the weekend forecast right now are advising people to "stay tuned, as there is the potential for development late in the week/over the weekend."

Bottom line: if that clipper system intensifies off the coast and brings significant moisture to the region, it will be snow.

Here is the current 7-day forecast from the weather service:

Tuesday night: Mostly cloudy, with a low around 19. Calm wind becoming northwest 5 to 7 mph after midnight.

Wednesday night: Mostly clear, with a low around 14. Northwest wind 7 to 10 mph.

Thursday night: Mostly cloudy, with a low around 15.

Friday: A chance of snow after noon. Partly sunny, with a high near 26. Chance of precipitation is 30 percent.

Friday night: A chance of snow. Mostly cloudy, with a low around 18. Chance of precipitation is 30 percent.

Saturday: A chance of snow. Partly sunny, with a high near 27. Chance of precipitation is 30 percent.

Saturday night: Partly cloudy, with a low around 16.

Sunday: Mostly sunny, with a high near 24.

Sunday night: Mostly cloudy, with a low around 13.

New Year's Day: Mostly sunny, with a high near 24.