Springsteen on depression: 'It sneaks up on you'

Rock legend sits down for ranging interview before release of autobiography 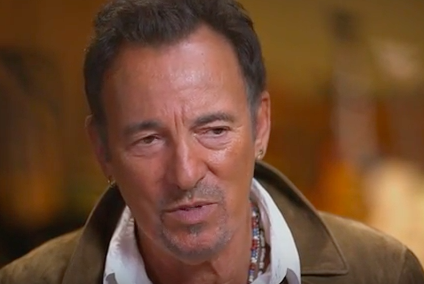 It's been a marathon year for multigenerational rock icon Bruce Springsteen, who will turn 67 years old on Friday.

Over the past several months, The Boss and his famed E. Street Band played 75 shows on 2016's "The River" tour, including a U.S.-best four-hour, one-minute set at Philadelphia's Citizens Bank Park on Sept. 7.

Nearing the late stages of an epic career, the Rock & Roll Hall of Famer (1999) recently completed an autobiography, "Born to Run," that will hit U.S. bookstores on Sept. 27.

In advance of the book's release, Springsteen sat down with "CBS This Morning" to discuss the highs and lows of his life and artistic journey.

In addition to covering his inspired rise from obscurity and his unshakable relationship with late saxophonist Clarence Clemons, Springsteen opened up to CBS's Anthony Mason about his struggles with depression as an adult.

Mason asked Springsteen if he could ever see it coming.

"Not really, you know? It sneaks up on you," Springsteen answered. "It's like this thing that engulfs you. I got to where I didn't want to get out of bed, you know, and you're not behaving very well at home, and you're tough on everybody."

Despite trying to hide his illness from his kids, Springsteen says his wife of 25 years and fellow bandmate, Patti Scialfa, was instrumental in helping him recover.

"Patti really had to work with me through it," Springsteen said. "Her strength and the love she had was very important as far as guiding me through it. She would say, 'well you're going to be okay, maybe not today or tomorrow, but it's going to be alright.'"

For some reason, Springsteen said, his depression never really affected his ability to write and play music.

Eventually, Springsteen wrote the song "This Depression" to chronicle his struggle. He has since overcome his condition — one that affects more than 15 million American adults — through a combination of medication and therapy.

The Boss will appear at The Free Library of Philadelphia on Sept. 29 to promote "Born to Run." Tickets for the event, including one pre-signed book a chance to take pictures, can be purchased here.