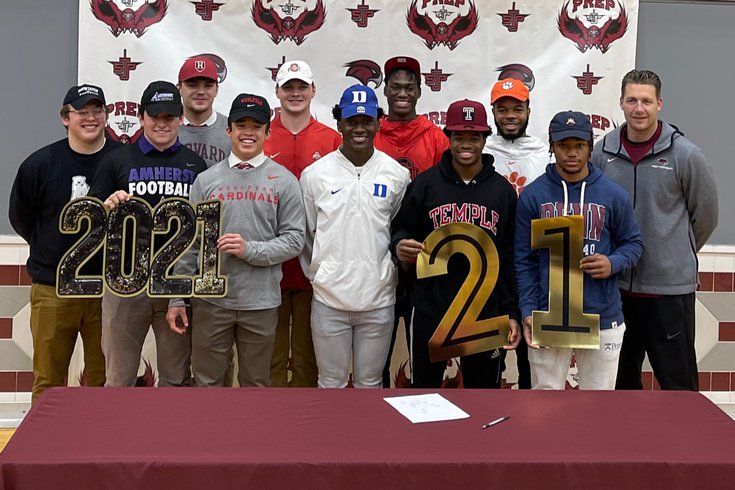 As they each signed where their futures were heading on Wednesday during National Signing Day, a thought crept across their collective minds that in a blink, it seemed, it was all over.

The trio served as the cornerstone of a team that will resonate for years. Wednesday was the final verse of their last song.

“It hasn’t really hit me yet, that it seems like last week, I was beginning my freshman year at 'The Prep,' and in a few weeks, I’ll be a college football player,” said McCord, who was 27-2 as starter, set a new city record with 88 career TD passes and who will be reporting to Ohio State with Harrison on Monday, January 4 for early admission. “My high school experience and the guys I played with will always be a part of me. That’s probably what I’ll miss the most, being around the guys and this team.

“A few weeks ago, I took the time to look over some of the pictures of this team, and it’s pretty awesome to think of all the things we did in the last three years. This 2021 class came in and did something that had not been done in over 20 years. Especially in a year like this, [it] makes what we did even more special.”

Things will escalate quite quickly for McCord, who Ohio State coach Ryan Day was effusive about during National Signing Day. McCord, according to Day, will be given an opportunity to start as a true freshman for the Buckeyes at quarterback next season.

“Kyle, right from the jump, is somebody we recognized early as very, very talented,” Day said. “We had an opportunity to watch him play. I thought he had a chance to be a really, really good player. I know he’s excited about getting here early on and competing the minute he walks in the door. So, we’re very, very excited that he’s now a Buckeye.”

Current Buckeyes’ quarterback Justin Fields will most certainly commit to the NFL Draft, since he’s likely to be a top-5 pick. After Fields, no one on the current Buckeyes’ roster has attempted a pass in a college game. Day has no problems with McCord competing for the job.

“That is going to happen. He will compete for the job,” Day said about McCord. “We have to figure out, if Justin goes to the NFL, who the next quarterback will be at Ohio State, and that’s a big, big deal. I know he’s looking forward to getting in here and competing right away.”

For Hawks’ head coach Tim Roken, who is a finalist for All-American Bowl National Coach of the Year Award, he found signing day bittersweet. Roken, who in his second year directed the Hawks to their third-straight state title, was the offensive coordinator when these seniors were sophomores. He watched this group grow up—and now they’re leaving the coop.

“That’s the hard part,” Roken admitted. “They’re special young men who you want them to succeed and you know that they’re going, but it wasn’t easy, because of the connection I have with this senior group, especially this year with COVID-19 virus.

“As a coach, you always remember your first team, and your first win, but nobody will ever forget this year and what this team did, considering all of the adversity they faced. We, at times, didn’t even know if we were going to have a season. This group will go down in the record books for everything they did, and it’s a resilient bunch. They were always poised, and reset their focus when they had to.

“But I’ll admit, it was emotional for me, because it makes you go back through all of their time here and it was great to see the smiles on all of their faces. I look forward to celebrating their futures, because they’re all going to have great futures ahead of them.”

Trotter, who broke his right wrist in the Hawks’ state semifinal victory over Souderton, was wearing his Clemson orange Wednesday morning. More importantly, he’s healing well and will be attending Clemson on time Monday, January 4.

“This is a time I’ll never forget, and I got a great education at a great school,” said Trotter, who was given the game ball after the Hawks’ 62-13 state title victory over Central York. “I’ll look back at this time as a great experience for me, and I got to play with my brother (Josiah) my senior year. I’m blessed to continue with new experiences and continue my career.”

Trotter said his lasting gold nugget was hugging his brother and father on the frozen Hershey Park Stadium field after three-peating.

Harrison will be McCord’s teammate and roommate at Ohio State. The Buckeyes have told him he has a good shot at wearing No. 8, his father’s college number at Syracuse.

“I got here three years ago (when he transferred out of La Salle) and coach Roken, Kyle, all of these guys immediately accepted me, and that’s something that I’ll never forget,” said the 6-foot-4, 200-pound Harrison, who established a new Philadelphia city high school record with 37 career touchdown catches. “I’ll be in contact with these guys for the rest of my life. It started to get emotional, realizing this is probably the last time I’ll be in the school as a student.

“Academically, I won’t miss it [laughs]. But I know I’ll be better off for it in the long run. I’ll be honest, as I was signing, I was thinking there’s a lot more work to do. I know Ohio State is highly competitive."

As one chapter closes for the Prep seniors, another is about to begin — and the page is quickly turning.

"My world is moving fast," Harrison added. "In a few weeks, I’ll be taking college classes.”