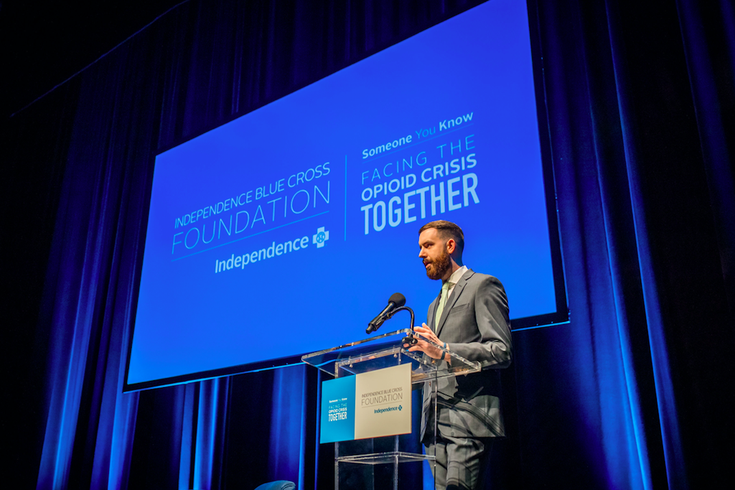 Two years ago, Patrick Flynn was spending considerable time coordinating speakers and other details for the Independence Blue Cross Foundation's Someone You Know conference, an event that brought together public health leaders to discuss the United States' opioid crisis.

In the course of planning the event, which focused on intervention, treatment and barriers to recovery, Flynn decided he needed to share his own story: He too is a person in recovery.

Prior to his speech, Flynn only had told three co-workers that he had spent more than a decade battling substance abuse. But on Oct. 16, 2018, Flynn stood on a stage at the Kimmel Center and opened up. In doing so, he hoped his story would help reduce stigmas – particularly those in the workplace.

"It was honestly just a blind leap, that I hope this works out in my favor," said Flynn, a government affairs specialist at IBX. "I have faith that it will. I'm a firm believer that you have to put yourself in uncomfortable situations to grow."

Flynn will accompany U.S. Rep. Madeleine Dean, a Democrat from Montgomery County, on Tuesday to President Donald Trump's State of the Union Address before finding his seat in the House gallery. He said he hopes Trump addresses the realities of addiction.

"A couple of years ago, more individuals died of overdose in America than the entire casualties of Vietnam," Flynn said. He wants Trump to "highlight this more and talk about how we remain vigilant in fighting this crisis that's gripping America."

The opioid crisis has grown to kill about 4,000 Pennsylvania residents every year. In Philadelphia, overdose deaths fell by 8% in 2018, the latest year in which figures are available. But they still amounted to 1,116 deaths – nearly triple the figure from 2010.

IBX Chief Executive Officer Dan Hilferty praised Flynn's work to end the stigmas attached to substance use disorder – and his willingness to speak about his own struggles.

"By courageously sharing his personal recovery story, he has motivated others to come forward and ask for help and understanding," Hilferty said in a statement. "We are pleased Rep. Dean has recognized him to help highlight her laudable commitment to ending the opioid epidemic."

It's not the first time Flynn has been recognized for his efforts to increase awareness about substance use disorder. Last year, Caron Treatment Centers named him an Unsung Hero.

Flynn's own addiction struggles began at age 12. He bounced in and out of treatment and rehabilitation centers for years until he finally stopped using shortly after turning 25. He has been in recovery for more than five years.

For a while, Flynn said he mostly kept his story to himself – especially at work.

"You can talk about addiction in a lot of places, talk about your issues," Flynn said. "It's very tough to be able to openly bring that into the workplace."

That's true for the people battling addiction, but their loved ones, too, Flynn said. When he co-founded the Someone You Know associate group at IBX, Flynn said he often thought of his mother, who was afraid people would view her as a bad parent due to her son's addiction.

The support group provides IBX employees a place to share the way addiction impacts their lives. It aims to raise awareness about the effects of addiction while also reducing stigmas.

"That was the genesis and the passion behind starting the Someone You Know associate group," Flynn said. "I want to take it to where any individual who is working for IBX, who is dealing with this in any way, can feel comfortable enough to come forward to join this group and talk about it."

The support group is an extension of the the IBX Foundation's Someone You Know campaign, a grassroots effort designed to humanize the opioid crisis. Its 20 ambassadors – all local people in recovery – have been featured on various marketing platforms, including a mobile exhibit.

"I really think it's a powerful thing that more companies should be doing," Flynn said.