Former Eagle Tra Thomas let go by 97.5 The Fanatic due to cutbacks 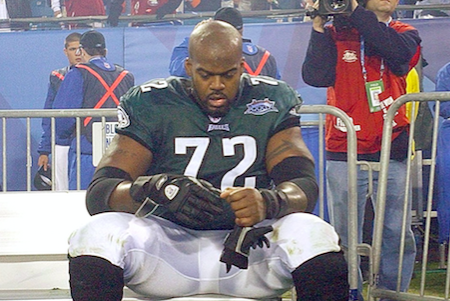 97.5 The Fanatic has parted ways with former Philadelphia Eagles lineman Tra Thomas, who joined the station as a morning host in 2018. Station owner Beasley Media Group reduced employee salaries in a measure to navigate the economic impact of the coronavirus pandemic.

Former Philadelphia Eagles offensive lineman Tra Thomas will no longer appear on 97.5 The Fanatic as a result of cutbacks made by station owner Beasley Media Group, the morning host announced.

Thomas, who played 10 seasons in Philadelphia and earned three Pro Bowl nods, announced his departure from the station on Tuesday morning.

Welp guys it’s been real! I was just notified that due to cutbacks, I’ve been released from @975Mornings. I want to thank @MarcFarzetta @jelynchjr @BobCooney76 and @samwils18 and our listeners for an amazing ride. I’ll see you guys on the other SIDE, SIDe, SIde, side

Thomas joined 97.5 The Fanatic late in 2018 as a morning show co-host with Marc Farzetta, part of a series of big changes at the station as Anthony Gargano shifted to the mid-morning slot.

"While it is not something we want to do, it is necessary in the long-term as we continue to move forward to get to the other side of the economic situation," said Beasley, who will also take a 20% cut in compensation through the end of the second quarter.

Beasley took over as CEO of the family-owned business at the start of 2017, just after the company acquired Greater Media for $240 million.

The salary and hours reductions for staff will begin April 1 and continue through the end of June, according to the email obtained by PhillyVoice.

Companies across various industries have made similar moves in recent weeks, some led by cuts in executive pay and others impacting large parts of the staff. The Philadelphia 76ers reversed course on a plan to reduce salaries for certain staff after facing criticism for the decision.