Watch the implosion of Trump Plaza casino in Atlantic City

Demolition of the building, once operated by the former president, took place at 9 a.m. Wednesday 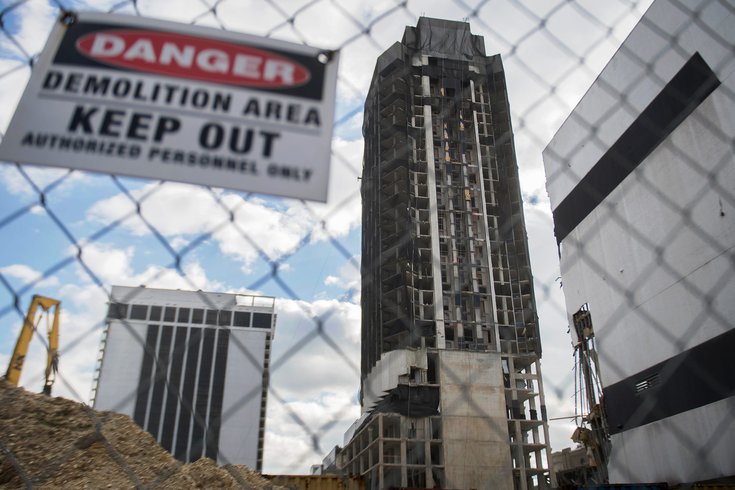 Seven years after its closure, the former Trump Plaza Hotel and Casino will be demolished at 9 a.m. on Feb. 17, 2021.

UPDATE (10:25 a.m.): The implosion of the Trump Plaza Hotel and Casino was completed at 9 a.m. Wednesday. Below are several angles capturing the demolition.

TRUMP PLAZA IMPLOSION: The dilapidated building that once held the Trump Plaza Casino will be imploded Wednesday morning.

Atlantic City will mark the end of an era with the implosion of the Trump Plaza Hotel and Casino on Wednesday morning, bringing the 39-story tower to the ground at 9 a.m.

Multiple cameras have been positioned in the vicinity of Trump Plaza to broadcast the demolition online, including the livestream embedded below.

The implosion also can be viewed at atlanticcitywebcam.com, the Atlantic City government's facebook page and at the Press of Atlantic City.

The Trump Plaza Hotel and Casino opened in 1984, originally under shared ownership with Harrah's Entertainment before Trump Enterainment Resorts took full control of the property. Donald Trump cut ties with the casino in 2009, but continued to receive a 10% fee for use of its name.

The facility, once a dazzling addition to a thriving boardwalk casino district, closed in 2014 amid a spate of other casino closures, including the Revel, Atlantic Club and Showboat. The property was purchased out of bankruptcy court in 2016 by Icahn Enterprises.

The former casino was one of several that former President Donald Trump owned at the popular Jersey Shore destination.The Trump Marina, which closed in 2011, has since become the Golden Nugget. The Trump Taj Mahal closed in 2016 and has reopened as the Hard Rock Hotel and Casino.

In the seven years since the closure of Trump Plaza, the building has deteriorated. Demolition plans were expedited last year when debris flew off the property during heavy winds. It was declared a public health hazard.

Due to the coronavirus pandemic and the inherent risks of a large demolition, viewing opportunities will be limited by a zone of exclusion running several blocks from Georgia Avenue to Arkansas Avenue along the boardwalk and beaches.

Those hoping to view the implosion from afar have been invited to do so from Bader Field, the former home of Atlantic City's airport. The field will be open for people to watch from a safe distance. Gates will open at 7 a.m. and attendees will have to pay $10 for parking.

Late last year, there were plans to hold an auction for the opportunity to press the demolition button for Trump Plaza. A legal dispute dashed that opportunity, but nearly $200,000 in donations will go to the local Boys & Girls Club in Atlantic City, including a $175,000 contribution from Carl Icahn.