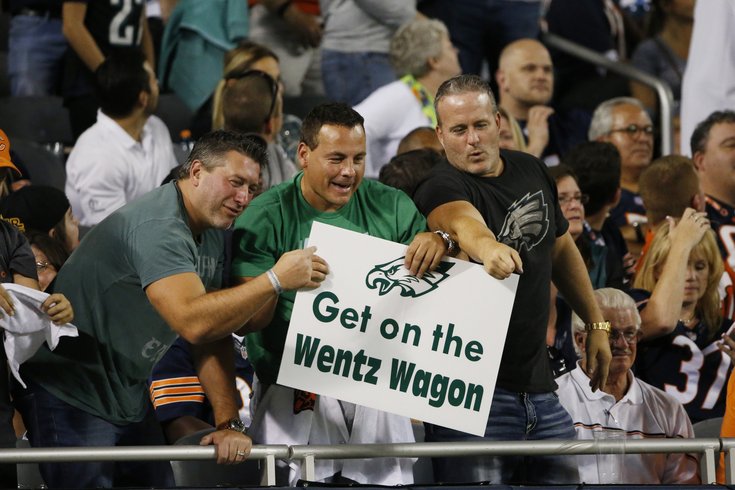 "All aboard the Wentz Wagon!"

Who is the latest to hop on the Wentz Wagon? That would be Las Vegas oddsmakers, the same ones who were down on the Birds following the trade that sent Sam Bradford to the Vikings and propelled Carson Wentz into the starting role.

According to the Westgate Superbook, the Eagles (30-1) now have the 17th-best odds to win Super Bowl LI, tying them with the Jets. When they released their preseason odds the week between the Bradford trade and the start of the season, the Birds had the third-worst odds at 100-1.

The bad news for the Eagles, however, is when you look at who else is waiting for them down the road. Ten of their 14 remaining games are against teams that Vegas currently thinks is better, including three of the top five and five of the top 10 (based on current odds).

Their first two games, on the other hand? Arguably against the two worst teams they'll see all season. But even those wins, likely in large part to how the rookie QB performed in them, were enough for oddsmakers to improve their outlook by the largest margin of any team. And it wasn't even close.

Here's a look at the current Super Bowl odds for the entire NFL, with the teams that the Eagles play this season in bold.

*Keep in mind these odds were released before the extent of Adrian Peterson's injury was known.

Other books have the Eagles even higher. Bovada, for example, has them tied with, among others, the Cowboys for 11th at 33-1. VegasInsider.com has them tied for 13th overall at 35-1.