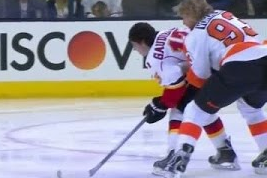 Voracek guides Gadreau down the ice.

The NHL's All-Star weekend began Saturday with the Skills Competitions. This included the Breakaway Challenge, an event that Flyers players Claude Giroux and Jakub Voracek competed in. During the challenge, forward Ryan Johansen of the hometown Blue Jackets (the weekend's events are being held in Columbus) earned a collective "aw" from the crowd when he grabbed the son of his team's trainer to shoot and score a goal:

In response, Flyers forward Jakub Voracek chose a youngster to shoot for him as well. But instead of a cute kid, he grabbed Calgary Flames rookie Johnny Gaudreau:

Voracek joked about the stunt later, and Gaudreau was receptive. Per nhl.com:

"I think that little kid was bigger than him," Voracek joked. "Let’s be honest."

"He came up and asked me first if it was all right," Gaudreau said. "I thought it would be pretty funny to do something like that, and it was a lot of fun."

In the end, Johansen won the competition.