From glitzy Atlantic City casinos to old Hunt's Pier in Wildwood to the haunted Brigantine Castle, take a look into the past 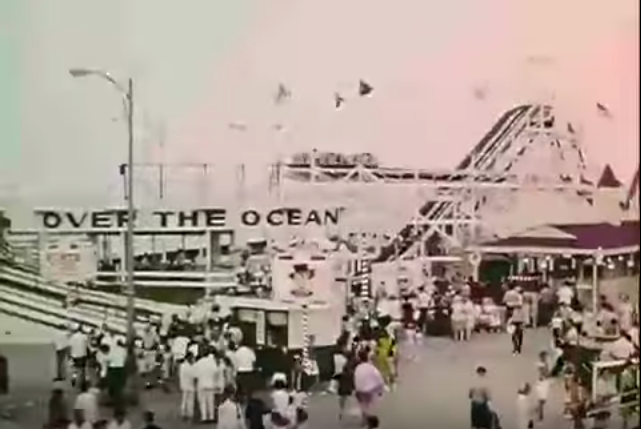 This screenshot is from a 1970s commercial for Hunt's Pier in Wildwood.

The Jersey Shore's allure is built securely on nostalgia.

Where did your family get ice cream? What since-demolished amusement park ride did you eagerly wait in line for? What beach shack has since been replaced by a bayside mega-mansion?

The shore will always be fun, but deep down, we all have that lingering feeling of how much fun it used to be. And although overindulging in nostalgia can be nauseating, in small doses it can be a soothing comfort — like enjoying an ice cold beer with your feet entrenched in the sand.

RELATED: Tips for not losing your mind in Jersey Shore traffic

This past Thanksgiving/Christmas/holiday season, I compiled a bunch of old commercials for department stores, sports teams, parades and more, and there seemed to be a good amount of interest from you, the readers, in taking a peak into the past.

So, with summer in full swing, I decided to do the same with commercials advertising Jersey Shore towns and the businesses that populate them.

The defunct Hunt's Pier once delighted boardwalk patrons with rides like the Golden Nugget and the Scream Machine. Now, thrill seekers in Wildwood have to go to Morey's Pier, which acquired Hunt's in 1998.

The thing that 8-year-old me would miss the most about the "old" Sea Isle makes a brief appearance at the :12 mark: the wooden playground at Dealy Park. It was replaced about a decade ago by a playground that won't give kids splinters.

The popular haunted house on the beach at Brigantine burned down in 1987 while it was being dismantled due to code violations. The classic commercials, however, live on.

The suit/haircut combination of the dude at the :29 mark is exactly what I imagine when I think of wannabe high rollers at Atlantic City casinos in the 1970s.

Gambling! Dancing! Drinks! Boxing! My head is going to explode!

Have a link to a classic Jersey Shore commercial that I missed? Send it over in an email and I will add it to these!