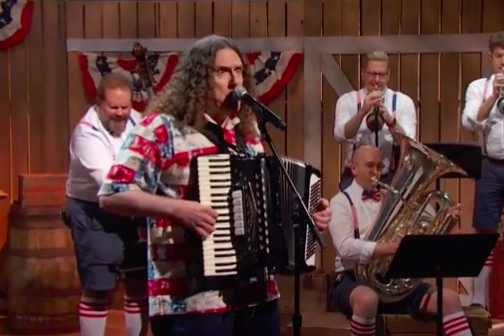 Tensions with North Korea have returned to a boiling point in recent weeks, exacerbated in part by the rhetoric of President Donald Trump and America's volatile relationships with regional powers in China and Russia.

While some have tried to reassure American citizens by publishing a missile range map of North Korea's defense capability, others have turned to other tools that are often in short supply during tense times: reason and humor.

There are, however, a few areas of harmony between the two countries. Accordions, for example. Americans love their Zydeco and North Koreans have an unexpected reverence for the instrument, even including it in certain military practices.

"Here is where we are," Oliver said. "We have two nuclear-armed leaders who are accustomed to issuing empty threats to impress their own people and are now currently goading each other towards Armageddon."

On the off chance that his broadcast ever reaches the people of North Korea, Oliver wanted to give them some kind of reassurance.

"For what it's worth, I would like to give you, the North Korean people, a sense of how America is feeling right now in a way that you might understand and enjoy — and that is through the international language of the accordion."

Who better than Weird Al to do the honors?