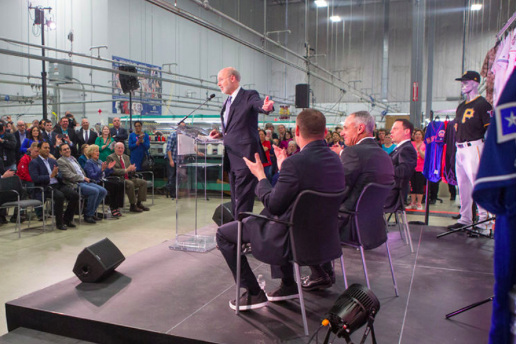 Source /Office of the Governor

Pennsylvania Gov. Tom Wolf speaks at Easton plant to announce that MLB uniforms will continue to be manufactured in Pennsylvania under new deal with Under Armour, Fanatics.

Pennsylvania Gov. Tom Wolf was joined by Major League Baseball Rob Manfred and others on Tuesday to announce that the Easton plant long used by Majestic to manufacture MLB apparel will remain in use under a new deal with Under Armour and Fanatics.

In October, Wolf wrote a letter to Manfred to request an opportunity to keep manufacturing on-field apparel in Easton, arguing that the location was in close proximity to several East Coast teams.

With 620 jobs at stake, U.S. Sen. Bob Casey also backed Wolf up in advocating for the facility to stay open.

Tuesday's gathering came as the VF Corporation announced it will sell Majestic to Fanatics. MLB announced in December that Under Armour and Fanatics would take over uniform manufacturing for a 10-year deal beginning in 2020.

“For more than a decade, if you watched a MLB game anywhere in the country, apparel made in Pennsylvania was proudly on display, and today’s announcement affirms that the proud tradition of making MLB apparel will continue in the Lehigh Valley,” Governor Wolf said. “The continued use of the Majestic facility is important news for the commonwealth, the region and the talented employees who are true baseball fans with a genuine pride in what they do. I want to thank everyone involved for working so hard to preserve this storied tradition in the Lehigh Valley that contributes to the treasure of our national pastime."