WWE Hell in a Cell: The Beast returns and renders the main event a no contest 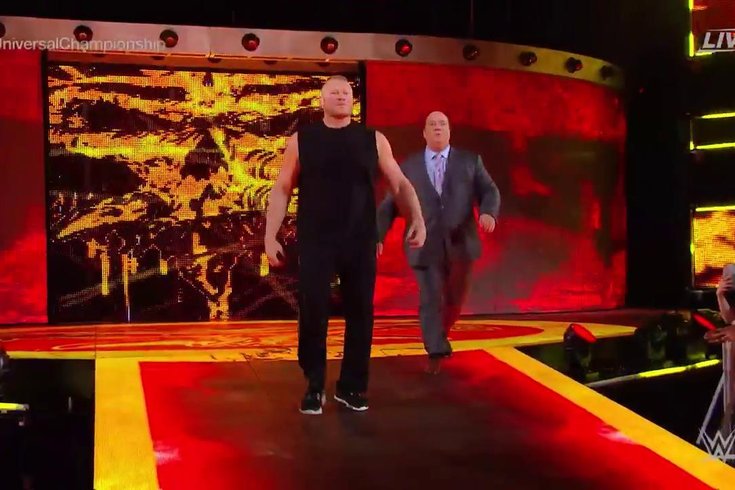 Brock Lesnar made a surprise return to WWE at Hell in a Cell on Sunday night.

Sunday night at the AT&T Center in San Antonio saw WWE’s first September edition of their annual Hell in a Cell pay-per-view. Roman Reigns made his first Universal Championship defense inside the cell against his rival Braun Strowman, who’s a newly-turned heel with Dolph Ziggler and Drew McIntyre as his henchmen.

In other feuds, Becky Lynch turned heel and attacked her best friend Charlotte Flair, prompting the SmackDown Women’s Champion to put her title on the line against her former best friend. Ronda Rousey defended her title against Alexa Bliss, as well. And a feud that could have realistically been settled inside Hell in a Cell in AJ Styles vs. Samoa Joe was just another regular wrestling match.

We’re in quite a different spot than we were one month ago at SummerSlam. But even though this is considered a B-PPV, the card shaped up pretty well considering the creative directions changed after the biggest event of the summer.

WWE also decided to update the look of the cell itself, painting it a red crimson color to try and add to the “hell” feel. I think it actually looks pretty good in red.

Let’s get to the results:

Going into the pay-per-view, there were no official matches scheduled for the preshow. That changed Sunday night as the SmackDown Tag Team Champions would defend their titles against the makeshift team of Rusev and English.

The New Day is already one of the most historic teams in wrestling history, but having a title match on the preshow is still looked at as a demotion from many a fan. But this match was definitely worth being on the main show because both teams impressed.

The champions would retain after a miscommunication between Rusev and English, which might spell the beginning of the end for that team. They’re still entertaining, nonetheless.

There were tables, ladders and chairs in this one, and it also saw a screwdriver introduced by Orton to Hardy’s earlobe in which he twisted it a few times around 180 degrees which made for a great reaction from the crowd and commentary. It really hammered home to the viewer just how ridiculous that was, in a good way.

Hardy performed a Swanton Bomb on a steel chair that was laying on a prone Orton, and it sliced a nice gash into Orton’s leg. So there was some blood here, but not the kind we were used to during Hell in a Cell’s infancy.

Hardy scaled the ladder, hung from the ceiling from the cell and tried splashing through Orton who was lying on a table. It didn’t work out for him. Orton moved, Hardy went crashing through the table and Orton pinned him as the referee was trying to get help for Hardy. Hardy would be stretchered out after the match.

It certainly wasn’t the best Hell in a Cell match, and this feud didn’t really warrant it to begin with. Of course Hardy was going to take a big fall, and the screwdriver in the ear spot was maybe the most crazy portion of the match. But this one will certainly not be remembered as one of the greats.

The first match between these two future legends in this storyline and on the main roster was fantastic. Lynch focused on Flair’s left arm the entire match and it was a back-and-forth affair.

Flair went for a spear and Lynch countered and rolled through and pinned the champion to win the SmackDown Women’s Championship in what I consider to be kind of a surprise. I wanted Lynch to win and I predicted she would, but it was still sort of a surreal moment that she did, in fact, win the title.

This was a necessary move to keep this storyline moving forward. The crowds aren’t reacting the way WWE wants them to, but Lynch becoming champion here will prolong the feud. I still think Flair is the SmackDown Women’s Champion heading into WrestleMania next year, but this could do more for Lynch in the long run than it would for Flair. I hope WWE’s decision-makers take full advantage of Lynch being as over as she is right now, but I wouldn’t bank on it.

I didn’t think The Shield would come out with the tag titles in this match, but there were many near falls in which I thought my prediction would be proven wrong.

But, it wasn’t. Both teams put on a hell of a match - no pun intended - and about halfway through I’d convinced myself The Shield would walk away with the titles.

It was a great match and by the end, it didn’t matter who won. The ending sequence was so good as McIntyre struck while Ziggler was still the legal man, and that was virtually as smooth as it could get. The champions retained, but it’s certainly not the last we’ve seen of these teams going against each other with the titles involved. We need more matches like this on a regular basis.

In what some might consider a necessary match to have inside the Hell in a Cell, the quickly-turned-personal feud of Joe vs. Styles was just a regular wrestling match for the second pay-per-view in a row. With these two guys having great chemistry together given how long they’ve been working with each other not just in WWE, but outside WWE, I didn’t mind a second match with no stipulation or gimmick because I figured we’d see it eventually. Stay tuned.

The two had a great match, which was no surprise, and the ending definitely wasn’t the last we’ve seen of this feud. Joe locked in the Coquina Clutch as Styles was going for the Phenomenal Forearm, but Styles countered it with a pin and the referee counted three. Joe threw a fit because he said Styles tapped out before the three count. After the match, replays showed Joe was right, but the referee’s decision was final and Styles walked out of the arena as WWE Champion.

Later in the night, Paige approached Joe backstage and said the referee’s decision is final and he’d get his rematch at Super Show-Down in Australia. Joe wanted no disqualifications and no count-outs and the SmackDown general manager agreed.

One of the most anticipated feuds since Bryan was medically cleared, these four have definitely made this some interesting television the last month and change. The Miz and Maryse are the perfect couple, as are Bryan and Bella, and as much as they hate each other, they all possess the same qualities.

Pretty good match here, and Maryse would eventually roll up Bella to get the pin. Bryan vs. Miz would’ve been great to have inside the cell, but I still don’t think this one is over. We’ll see a few more matches between these two, and possibly still see Maryse and Bella involved.

Bliss was accompanied by Alicia Fox and Mickie James, whereas Rousey countered with Natalya. Rousey and Bliss had a more even match than their affair at SummerSlam one month ago, and Rousey’s selling skills were on full display. We’re not used to seeing Rousey sell much, but she did a pretty good job during the course of this match against Bliss.

After a back-and-forth battle, Rousey locked in the armbar and Bliss tapped right away.

Roman Reigns © vs. Braun Strowman in a Hell in a Cell Match with Mick Foley as the special guest referee ended in a No Contest

I wasn’t a fan of the way WWE felt the need to make Strowman a heel, but in a way it makes sense given the reaction they want Reigns to get. The two had a classic feud last year and this match was a way to relive that feud, get the Money in the Bank briefcase off Strowman - when he never should have had it anyway - and Mick Foley would be the special guest referee in this one.

More weapons in this one, too. Foley also accidentally counted three after a Strowman chokeslam to Reigns, but we’re going to pretend like we never saw that.

Eventually, McIntyre and Ziggler would make their way down trying to get into the cell, and Rollins and Ambrose would come out to halt their attempt. All four of them wound up on the top of the cell fighting each other.

Then the Beast’s music hit. Brock Lesnar, accompanied by Paul Heyman, made his way to the ring and kicked the door off its henches. Heyman sprayed something in the eyes of Foley and Lesnar went to work. He destroyed both Strowman and Reigns with the remnants of the wooden table used during the match and gave an F5 to both men and left.

And instead of seeing the end of a match play out, WWE decided the best course of action was to just end the match then and there. The end credit rolled quickly after and the show was over. That was it.

The era of the WWE Network struck, and it wasn’t good at all. But WWE now has that crutch because pay-per-views aren’t the traditional pay-per-views of years past, where everything has a payoff. We’re not living in that era anymore, and it’s taking awhile for us to catch up to that. But a payoff like what we saw Sunday night further elongates a story that many aren’t interested in.

It’s not a ridiculous notion to be a subscriber to the WWE Network and assume you’re going to get the monthly payoff through their pay-per-views. It just didn’t happen Sunday night. It hasn’t happened quite a few times in the last few years. But I also think we should stop thinking of WWE pay-per-views in the traditional sense that we’re used to because it’s just simply not the same anymore. We’ll be hearing a lot of negative reaction to the ending of the main event, but once Raw hits the airwaves Monday night and we move past it, then everybody just seems to forget it. And that’s what WWE is banking on.

That, and it gives fans a reason to tune into Raw on Monday night.