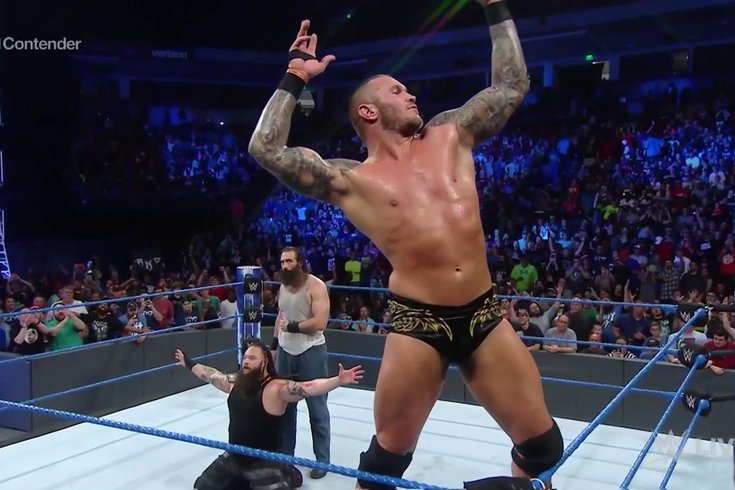 Bray Wyatt and Randy Orton will get a shot at the SmackDown Tag Team title this Sunday at TLC.

Five days ahead of their next pay-per-view, TLC this Sunday, SmackDown invaded the Colonial Life Arena in Columbia, S.C. for their go-home show. This pay-per-view has been shaped rather nicely within the last month and all of the feuds heading into Sunday make sense. Well, maybe with the exception of one. But we’ll get to that later.

I’ll have a TLC preview later in the week looking at what should happen and what’s likely to happen.

Let’s see what went down in Columbia on Tuesday night:

The Ambrose Asylum with James Ellsworth

He’s not going anywhere anytime soon, folks. James Ellsworth was back in the spotlight on Tuesday night as the highly touted

AJ Styles interrupted the party and proceeded to run down both Ellsworth and Ambrose, eventually pushing Ellsworth into Ambrose in order to rid the ring of the WWE World Championship challenger and give Styles a one-on-one opportunity to inflict harm on the guy who just got a WWE contract last Tuesday.

And Styles did just that. He hit Ellsworth with a steel chair right in the back and then gave him a Styles Clash off the steel steps on the outside of the ring. Ellsworth did a stretcher job, which was probably supposed to make Styles look very good and gain a tremendous amount of heat.

Later on in the show, Styles tried hijacking an interview with the SmackDown Tag Team Champions, Heath Slater and Rhyno, but Ambrose found him and the two brawled as the show came to an end.

Make that two pay-per-views for the tag team of Jason Jordan and Chad Gable where they were ready for a Tag Team Championship opportunity, but let it slip away. I’m not sure why WWE is teasing an American Alpha title shot, but two times of not delivering isn’t a great message to the fans when they are simply the best tag team that anyone wants to see in action.

But, of course, Randy Orton and Bray Wyatt deserve a tag team title shot more so than American Alpha, right? I guess. Maybe it will lead to Orton turning on Wyatt, which is what I think this whole angle’s end game is. American Alpha need to be the SmackDown Tag Team Champions soon. If they’re waiting for WrestleMania to crown them, that’s fine, but it needs to happen.

Becky Lynch and Alexa Bliss sign the contract for TLC

I love contract signing segments. I don’t know why. It’s not because they’re great.

Bliss made fun of Lynch, saying being nice got her nowhere. Lynch retorted saying she’s the SmackDown Women’s Champion, and she didn’t get there by being nice. Bliss said every time she hears Lynch speak, she feels like she’s going to vomit. “It doesn’t matter how good you are, or how hard you work, there’s always someone better,” Bliss said.

Unfortunately, Bliss kept taking shots at Lynch’s speech and one line put it over the top: “I know they didn’t really teach you how to speak coherently on that potato farm, so don’t call me Lexie. It’s ‘Alexa.’”

Lynch had enough. She attacked Bliss after Bliss signed the contract and then she set her up like she was going to suplex her off the top rope through the table, but Bliss countered and shoved her through it herself and stood tall at the end of the segment. What a perfect way to set up a Tables Match at the pay-per-view on Sunday. Good stuff here.

I’m not digging how Lynch’s speech keeps being brought up every week. Yeah, she has an Irish accent. So does Sheamus. Get over it, WWE. Stop making it an integral part of the storyline. The Tables Match for Sunday was made official on Talking Smack.

Some people don’t care much for this feud, but I think it’s actually been one of the bright spots of the SmackDown brand. Carmella couldn’t get over as a face, and as a heel, she hasn’t lit the world on fire, but on Tuesday night, she hit on something. She started talking some smack on Nikki Bella’s well-publicized boyfriend, John Cena.

Carmella said she was going to hit Bella so hard in her chest that her own “Bella Twins” were going to be popping out of her back. She continued to run down Bella and her TV show, Total Bellas, before that famous tune hit and Bella came out and attacked her. Carmella wound up getting away, but the message was sent - she’s not going to tolerate anybody talking smack on Cena.

Even though the Cruiserweight Division is being kept on Monday Night Raw for the time being, 205 Live might actually be a good thing for the cruiserweights in general. While it makes sense to have a show highlighting the cruiserweights, it now gives the division the spotlight Mondays and Tuesdays. I’m a glass half-full kind of guy here, you know.

And what a debut for the new program on the WWE Network immediately following SmackDown. Rich Swann took on the defending champion, Brian Kendrick, in a very good match. I guess it shouldn’t surprise anyone because WWE likes to create a bang for new shows, but Swann came away with the Cruiserweight Championship after defeating Kendrick. It’ll be interesting to see how Monday Night Raw utilizes the cruiserweights now that they have their own show on Tuesday nights.

• Dolph Ziggler/Kalisto d. The Miz (c-IC)/Baron Corbin by disqualification after Corbin hit Kalisto with a steel chair during a pin attempt on The Miz.

• Kane d. Luke Harper by pinfall via a chokeslam.