A look at eight of Philadelphia's most notorious murder cases

The mass murders of four young men in a quiet Bucks County town in July were heinous by any definition.

The slayings by accused killer Cosmo DiNardo occurred about 15 miles north of the Philadelphia city limits.

In fact, Philadelphia is ground zero for notorious murders in the region.

Who could forget the self-anointed bishop who ran a church – and a makeshift torture chamber – out of his North Philadelphia home?

Or the Philly mother whose 10 young children all died before age 2?

Or the city shoemaker who enlisted a curious partner-in-crime to rob, assault and torture four families?

We've taken a look back at murder cases that may ring a bell. Some may not.

But they all shocked the city at one time or another over the last several decades. Some headlines even shocked the nation and the world.

Some gripped their communities in fear until they were solved. One was never put to rest at all.

Here's a list of some of Philadelphia's most notorious murders:

Marie Noe is a Philadelphia mother who had eight children die before the age of 2.

At first, she was portrayed as having a string of horrible luck when it came to birthing and raising children. In addition to the deaths of the eight children that Noe would have over three decades with her husband, Arthur, two other children never made it out of the hospital.

Noe's curious case prompted a Life Magazine story in 1963 that sympathetically painted the Philadelphia housewife and part-time factory worker as a bereaved mother.

It took 35 years before prosecutors brought murder charges against Noe, who was 70 when she was accused of suffocating eight of her children in a 19-year span.

Each case ended in the same way, prosecutors said. One day, when they were left with only their mother at home, all eight babies would suddenly begin gasping for breath and turning blue in the face.

Police reportedly reopened the investigation in the late 1990s after the case found its way into a Philadelphia Magazine article and the 1998 book, "The Death of Innocents."

Noe pleaded guilty to eight counts of second-degree murder in 1999 and was sentenced to five years of house arrest and 20 years of probation.

Noe may have suffered from a psychological disorder called Munchausen syndrome by proxy, according to some experts. The disorder is marked by "attention-seeking behavior by a caregiver through those who are in their care," according to WebMD.

By all accounts, the 88-year-old is still alive and was living in Philadelphia when she agreed to an interview with the Philadelphia Daily News in 2010.

But she refused to speak about her crimes.

"I don't want to think of it!" she yelled at reporter Barbara Laker. "Please, no!"

We continue with one of the more savage series of crimes on this list.

Joseph Kallinger, a Philadelphia shoemaker-turned-killer, had a partner-in-crime who helped him bind, rob, assault and torture four families in a six-month spree: his teenage son.

The father-and-son duo entered homes in Philadelphia, Baltimore and New Jersey, pretending to be salesmen before robbing homes and sexually assaulting the women.

Their final act took Kallinger and son Michael, then 13, to Leonia, New Jersey, where they used a pistol and a knife to overpower three residents and tie them up. More people soon entered the house, and the pair ended up torturing a total of eight people for hours.

It wouldn't end there, either.

Kallinger was later convicted of murdering his 14-year-old son, Joseph, and a 9-year-old boy from Philadelphia shortly before the crime spree began. Kallinger, it turned out, had spent several months in prison in 1972 for abusing his kids. Three of his six children had accused their father of abuse.

His son Joseph had been one of the accusers. He was found dead in the rubble of an old building in Philadelphia.

Kallinger, who died in prison in 1996, pleaded insanity and claimed God instructed him to kill. Psychiatrists testified in court that he had paranoid schizophrenia.

Jurors had none of it.

Michael Kallinger reportedly pleaded guilty to two counts of armed robbery and was released after spending time in juvenile custody. It is believed he moved out of state and changed his name. He would now be in his 50s.

This well-known Philly hippie figure in the 1960s and '70s claimed to have helped found Earth Day and promoted flower power, peace and love.

As fate would have it, Ira Einhorn killed his longtime girlfriend and stored her body in a trunk.

But after posting $40,000 bail following his initial arrest in the killing, Einhorn skipped town and spent decades hiding out in Europe under a number of assumed identities.

He was finally extradited to the United States from France in 2001 and was found guilty of Maddux's killing. He is serving a life sentence.

Einhorn found his way into the media limelight again last year when he was transferred to a minimum-security prison in Somerset County.

At the time, state officials declined to say why they transferred Einhorn. Although officials told Philly.com that they had planned to return him to the medium-security State Correction Institution Houtzdale in Clearfield County, Einhorn still resides in the minimum-security facility.

There have been a number of tags associated with Gary Heidnik, an Ohio transplant who ran a church out of his North Philly home that mostly drew the mentally disabled.

The son of a former East Lake, Ohio, councilman, Heidnik was a U.S. Army veteran with a ridiculously high IQ who struck gold in the stock market and reportedly created the "United Church of the Ministers of God" to dodge taxes.

Neighbors on his Marshall Street block in Tioga told reporters at the time that Heidnik was a bit eccentric. After all, he was a self-ordained bishop who regularly blasted heavy metal music and made loud banging noises at odd hours inside his home. Neighbors also complained of a strong odor coming from his house.

But he didn't seem like a killer. Or a torturer, for that matter.

But what Philadelphia police found in Gary Heidnik's home in 1987 – body parts in the kitchen and a basement-turned-torture chamber where three half-naked women were found imprisoned – shocked the city.

Heidnik had abducted six women beginning in November 1986 and held them in his basement. Two died. Survivors said they were kept half-naked in Heidnik's basement and fed dog food mixed with human remains.

One of the captives, Josefina Rivera, would ultimately escape and alert police. She later wrote a book based on the experience, "Cellar Girl."

Heidnik was found guilty and convicted of murder in 1988. He was executed by lethal injection on July 6, 1999, and is still the last inmate to be legally executed in Pennsylvania.

Gary Heidnik was still awaiting trial on murder, kidnapping and torture charges when city police officers made another grisly discovery in the summer of 1987.

The bodies of seven women were found beneath piles of trash and mattresses in Harrison “Marty” Graham’s North Philadelphia apartment, shortly after he had been ordered to vacate the building because of the persistent foul odors emanating from his unit.

He strangled the women after luring them to his apartment on North 19th Street, near Temple University, with drugs.

Graham initially fled once authorities began to close in, but he turned himself in a week later. The “House of Death” killer took only a few items with him for his brief time on the run, including his Cookie Monster puppet.

He was found guilty and sent to death row in 1988 on seven counts of first-degree murder and a host of manslaughter and abuse of corpse charges.

Graham’s life was spared when the U.S. Supreme Court forbade executing the mentally disabled in 2002. His death sentence was thrown out in Pennsylvania court in 2003, and he continues to serve a life sentence at SCI Coal Township in Northeast Pennsylvania. 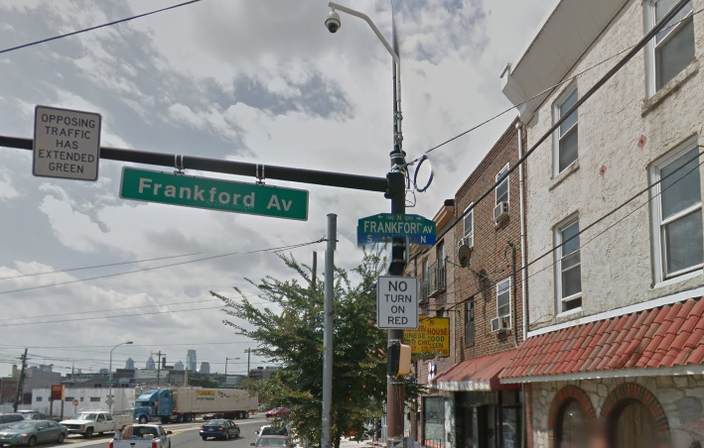 A Frankford Avenue sign at the intersection of Girard Avenue.

The 1980s were a dark period in Philadelphia history, no?

The lone unsolved case on our list centers on a presumed serial killer dubbed “The Frankford Slasher” by the media.

From 1985 to 1990, the killer is suspected of brutally cutting down as many as nine women who frequented bars along Frankford Avenue. In each case, authorities found a woman who had died from numerous stab and slash wounds, along with evidence of sexual assault.

In 1996, prosecutors convicted Leonard Christopher for the 1990 murder of 46-year-old Carol Dowd, whose body was reportedly found in the alley behind the now-shuttered Newman’s Seafood on Frankford Avenue.

But the final victim believed to be linked to the killings was murdered while Christopher was awaiting trial behind bars. Christopher, who is African-American, also did not match witness descriptions of a white man seen with a few "Frankford Slasher" victims shortly before their deaths, according to reports.

He was never tried for any of the other killings, and he continues to serve life in prison.

It's been 17 years since four gunmen rushed a known crack house on the 800 block of Lex Street in Philadelphia and sprayed 10 people with bullets, killing seven.

A new public housing development now stands on the once-dilapidated and drug-ridden block, but it remains notorious for the "Lex Street massacre," which remains the city's worst mass shooting on record.

Authorities initially believed the killings were meant to wipe out rival drug dealers, but it was later determined that they actually stemmed from a car deal gone bad.

Four other men were initially charged in the slayings, but the case fell apart and they were let go after being jailed for 18 months. The city agreed in 2003 to award a $1.9 million settlement to Jermel Lewis, Quiante Perrin, Hezekiah Thomas and Sacon Youk, who were arrested in connection with the murders in January 2001.

Antonio Rodriguez admitted to being the "Kensington Strangler" in January 2011, ending a case in which the convicted killer was dubbed a "sexual, serial killer." Rodriguez wanted to have "rough fantasy sex," choking the women until they were unconscious, but they didn't want to kill them, the Inquirer reported at the time.

The murders of Elaine Goldberg, 21, Nicole Piacentini, 35, and Casey Mahoney, 27, in late 2010 gripped Kensington until a DNA match led to Rodriguez's arrest.

Some watchdog volunteers and social media users also wrongly accused an innocent resident in the murders. People began sending text messages, posting flyers and wrote on Facebook wrongly identifying the man as the strangler, according to an ABC News report at the time.

At one point, a Facebook group with thousands of users, "Catch the Kensington Strangler, before he catches someone you love," reportedly posted a picture of the man. Police soon found out about the misinformation and took the posts down, according to the report.

A Facebook search for the group turned up no results.

Rodriguez, 28, remains locked up in SCI Rockview in Bellefonte, Pa.