Advocates push for bike trail on abandoned rails in Bucks 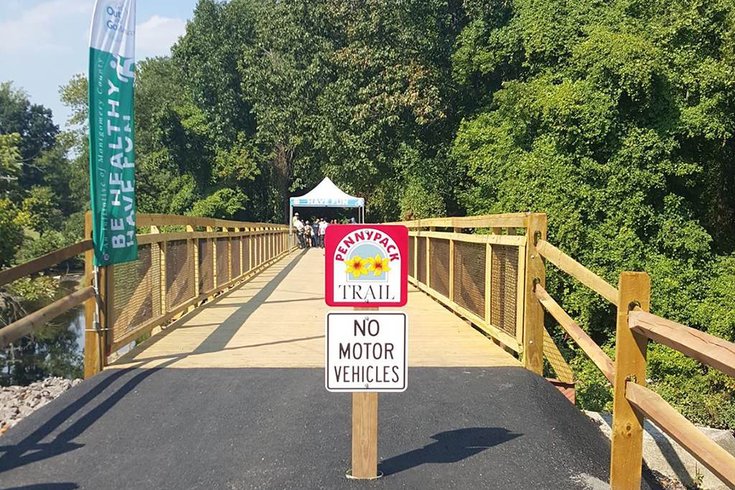 A new Terwood Road bridge opened in 2015 on the Pennypack Trail in Lower Moreland, Montgomery County. An effort in Bucks County would extend the trail from Upper Southampton to Newtown.

Bucks County and advocacy groups are planning an 8-mile bike trail along unused SEPTA rail lines that would extend from the Pennypack Creek Trail in Montgomery County through five Bucks towns.

Once the extension, known as the Newtown Rail Trail, is complete, folks could conceivably hop on their bikes at the Delaware River in Pennypack Park and take a 23-mile ride to Newtown.

Sounds cool, right? Not to everyone.

About 60 people attended an informational forum Wednesday night in Northampton, that was sponsored by Bike Bucks County -- a volunteer advocacy group for bicyclists.

Paul Gordon, an environmental planner for the Bucks County Planning Commission, explained that the county is in the process of seeking resolutions of support from Upper Southampton, Northampton, Middletown, Newtown Townships and Newtown Borough.

“We will fight this as much as we can.” – Bruce Stamm, president, homeowners association, Jordan Corners, in Holland, Bucks County

“We’re not going to do anything until we have municipal support,” Gordon said.

The trail construction – with an estimated cost of $5 million to $8 million, which includes tearing up tracks that haven’t been used since 1983 – can only begin once the county or individual municipalities secure leasing rights from SEPTA (usually for $1). The plans would then have to be formally approved by the municipalities and the state Department of Environmental Resources.

“They (the DEP) give this as much scrutiny as if it’s a new highway,” John Boyle, director of research for the Bicycle Coalition of Greater Philadelphia, told the crowd at the Free Library of Northampton Township.

Upper Southampton, at the southern end of the planned trail, has already approved such a resolution of support. And the William Penn Foundation has awarded the county a $100,000 grant for the design and engineering of a 2.5-mile bike path in that municipality. That grant approval, Gordon said, makes that section of the trail eligible for another $400,000 grant, which could be enough funding to get that section finished.

The Pennypack Trail runs from Huntingdon Valley to the Delaware River in Philadelphia. A portion follows SEPTA's former Fox Chase-Newtown line. Less than a mile of that trail is slated to be finished this year, which will bring the trail to Upper Southampton.

The largest section of the planned Newtown trail, 4.5 miles, would be in Northampton. Bucks County and advocacy groups plan to make a presentation to the township supervisors there by summer. Middletown, Newtown Township and Newtown Borough have yet to vote on resolutions of support.

While advocates expressed excitement for the Newtown trail on Wednesday night, a few others made it clear they want to put the brakes on the plan.

“We will fight this as much as we can,” said Bruce Stamm, president of the homeowners association for Jordan Corners, a 34-home development in the Holland section of Northampton Township.

Stamm said he is concerned the trail will bring more people who will trespass and possibly get injured and file lawsuits. He also insisted, even after an assurance, that proponents plan to use eminent domain to take land from property owners for access to the trail.

“There is no interest at all in doing eminent domain as far as the county is concerned,” Gordon emphasized.

Other residents expressed concern over safety at intersections with major roadways and increased taxes to maintain the trail.

Gordon said that while the trail’s maintenance is the responsibility of the municipalities, they usually last about 20 years before needing to be resurfaced, a project that is not a major expense.

Tom Hibbs, president of the citizens advocacy group Penn-Tammany Greenway Coalition, said the bike trails – generally only 12-feet wide – create areas that are easier to patrol, thus increasing safety. Intersections along the trail would be signalized and those signals would require PennDOT approval.

“Property values go up almost 9 percent near these trails and it becomes a selling point,” Hibbs said.

He added that bike trails aren’t used just by bicyclists.

“There are people with kids and strollers, folks in their 70s and 80s, families, single folks, couples, just about anybody you can think of, including people with disabilities,” he said.

“There’s a sense of community along the trail, and we want to involve the community in this process,” he added.

The process is time-consuming. Gordon explained that feasibility studies in individual communities take nine months to two years to complete. Design and engineering typically takes another year and construction, after funding is secured, would require another six months to a year to complete.