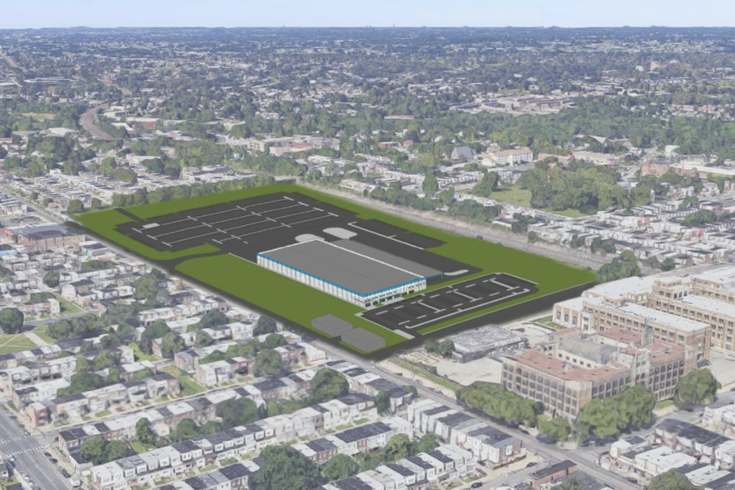 A rendering shows an early look at a proposal to redevelop a vacant site in the Eastwick section of Southwest Philadelphia, where Amazon has leased space for a fulfillment center on land SEPTA hoped could be used to store and maintain new trolleys.

Amazon's expansion in the Philadelphia area will continue with the development of a 140,000-square-foot warehouse in the Eastwick section of the city, a project expected to bring hundreds of jobs to the neighborhood.

The online retailer announced Friday it has signed a lease for the property at 6901 Elmwood Ave. in Southwest Philadelphia, the former site of a General Electric plant that has been vacant for more than 20 years.

The land had been targeted by SEPTA as an ideal location for storage and maintenance of new trolley cars, part of a multimillion dollar modernization project the transit authority is undertaking to improve its aging light-rail fleet and service. SEPTA had budgeted $5.7 million to acquire the land, which runs along trolley lines, but Amazon's interest in the site pushed up the price beyond SEPTA's spending limit, and SEPTA never had a binding agreement.

A possible push by SEPTA to take the land via eminent domain was ruled out due to an anticipated court battle that transit officials calculated also would have made the location too expensive.

Amazon did not provide financial details surrounding its investment in the Elmwood Ave. site.

Over the coming year, Amazon already has four other locations in the Philadelphia area that are set to become "last mile" delivery warehouses. The Eastwick site will add to its growing list of properties, and Amazon may well have long-term interest in the redeveloped site of the former Philadelphia Energy Solutions refinery, where the fallout of the 2019 explosion is now being cleaned up by Hilco Redevelopment Partners. Amazon joined other tenants at another Hilco-led industrial cleanup and redevelopment site in Baltimore called Tradepoint Atlantic.

“Amazon is obsessed with delivering for its customers," Amazon spokesperson Steve Kelly said. "This delivery center in southwest Philly will improve efficiency for customers and provide good paying jobs to residents of the local community at a safe and innovative facility."

Amazon officials hosted a public meeting with the three lawmakers last week to discuss the project with the community. Details about Amazon's plans have been shared by the Southwest Community Development Corporation.

In February, a redevelopment proposal submitted to the city's Civic Design Review board already had been tailored to the purpose of a wholesale, distribution and storage warehouse. The site area covers 28.65 acres.

Amazon said the new jobs will start at a minimum of $15 an hour and provide comprehensive benefits, promising a new source of employment in a part of the city that has seen industry and opportunity disappear for decades.

Critics of Amazon's move to Eastwick have not only pointed to mounting complaints about the company's warehouse working conditions and labor practices, but also say the SEPTA project is a vital part of the city's path to more equitable transit.

The eight trolley lines SEPTA runs though Center City, West Philadelphia and Delaware County serve densely populated parts of the region, but the trolley infrastructure is in need of upgrades to enable access to a greater number passengers and become compliant with the Americans With Disabilities Act.

A SEPTA spokesperson said Friday that the authority is still in the process of assessing alternative sites for a trolley facility in West Philadelphia, but didn't provide specific locations. The search was not necessarily limited to Southwest Philadelphia, where SEPTA had targeted the Elmwood Ave. site and also is considering a portion of the Penrose Plaza strip mall, according to the Philadelphia Inquirer. A possible expansion of SEPTA's existing Elmwood Avenue Depot has been evaluated as well, WHYY reported.

"Right now, nothing has been decided," the spokesperson said. "We will know more in the near future."

Amazon is currently preparing a comprehensive Transportation Impact Study that has been reviewed and approved by the Philadelphia Streets Department and PennDOT. Traffic signal and street lighting upgrades are planned at the intersections of Elmwood Avenue and 67th, 69th and 70th. Additional ADA upgrades and stormwater controls also are planned as part of the site's redevelopment.

Construction on the project is expected to begin this summer, with a target completion date in August 2022.