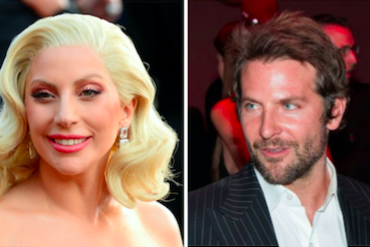 Lady Gaga (L) arrives at the Oscars on Sunday, Feb. 28, 2016, at the Dolby Theatre in Los Angeles. Bradley Cooper (R) poses for photographers upon arrival at the L'Oreal Red Obsession Party in Paris, Tuesday, March 8, 2016.

New father and new director Bradley Cooper has gotten close with Lady Gaga since it was announced last spring the pop star would play a leading role in the actor's remake of "A Star is Born."

The two were spotted riding a motorcycle together in Los Angeles around the time Lady Gaga joined the cast and Cooper later surprised his co-star backstage when she appeared on "Saturday Night Live" last October.

For the first time, we get a glimpse at the look and feel of Cooper's directorial debut, the fourth version of the 1937 classic. Warner Bros. released the a set photo of "A Star is Born" on Monday, showing Cooper and Gaga rehearsing together on a stage together. Lady Gaga shared the photo on her Instagram page.

The film tells the story of an actor who helps a rising actress achieve stardom, only to find his own fortunes fading as he plunges into self-destructive alcoholism. Pairings from the previous remakes included Judy Garland and James Mason in 1954 and Barbra Streisand and Kristofferson.

Lady Gaga, who will be credited in the film under her real name, Stefani Germanotta, accepted the role after Beyonce backed out of the project.

"I am so excited to star in my first movie alongside someone I'm so lucky to call my friend," Lady Gaga wrote in a caption for the photo. "I always wanted to be an actress on the big screen. The story of 'A Star is Born' is so special and I'm so grateful to Bradley for making my dream come true. Can't wait for you to meet Ally. She has her first scene in 5....⏰"