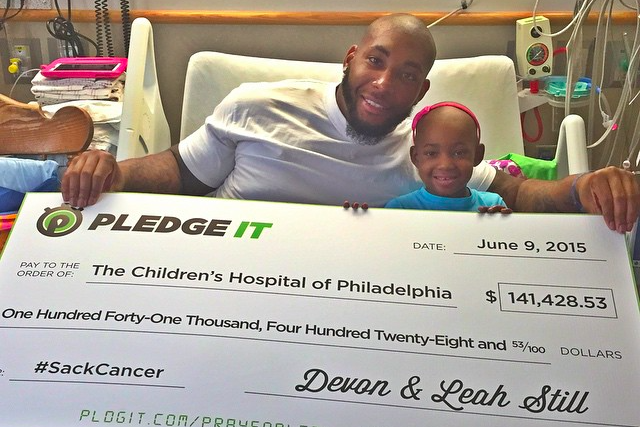 Devon and Leah Still present a donation to the Children's Hospital of Philadelphia.

NFL player Devon Still and his daughter Leah presented the Children's Hospital of Philadelphia (CHOP) with a generous donation Tuesday.

Still, a Camden, New Jersey, native who played defensive tackle at Penn State and now plays with the Cincinnati Bengals, announced the news on his Instagram page.

Thank you everyone who participated in our pledge it campaign last season. Because of your efforts in helping the fight against pediatric cancer we were able to present CHOP with a check today worth 141k!! This money will go to helping families worry less about financial stresses so they can focus on being there for their child and also to help fund more cancer research! Couldn't have did it without you all so again thank you! #LeahStrong

The Pledge It campaign collected donations for each sack that the Bengals defense recorded last season.

Leah, who has been receiving treatment at CHOP, recently suffered a setback in her treatment of a rare pediatric cancer. She had received news that her cancer was in remission in March.