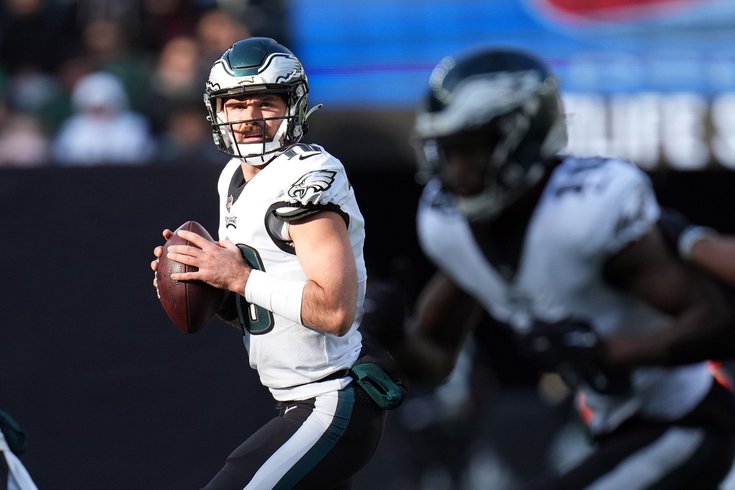 The Eagles' 2021-22 regular season will come to a close on Saturday night when they host the Dallas Cowboys at the Linc. But unlike like expected before the season began, this will not be the last game of Nick Sirianni's first year at the helm as the Birds will play again in next week's NFL wild card round, the time and opponent still left to be determined by Sunday's slate of games.

The Eagles can't really improve their seeding much by winning the game — they can move up one spot with a win and some help, but with so many moving parts they can't play a game of "Pick Your Opponent" simply based on their result — so it would make sense that the general belief is that they'll sit the majority of their starters, including a slew that were placed on the COVID list earlier in the week.

Dallas also doesn't have a ton to play for, as there are only a couple of scenarios in which they can move up from the fourth seed to either second or third, but it appears they might at least bring their starters out for a series or two, although Jerry Jones suggesting the starters will play earlier in the week could simply be a bit of gamesmanship. It's also worth mentioning that even if Dallas plays its starters, Micah Parsons, Trevon Diggs and Tyron Smith have all already been ruled out.

So where does that leave those of us whose job it is to try to predict what will happen in the game? Pretty damn lost, not gonna lie. But still, the show must go on. And as we've already offered up some players to watch, predictions (both our own and a roundup of those from elsewhere) and a breakdown of the injuries on both sides, it's time for our final Eagles over/unders of the regular season. Don't worry, they'll be better next week when the game actually matters...

That's the current total being offered at a majority of the sports books over at Sidelines.io. And while it seems right, who really knows? As you'll see, that's going to be a big theme throughout these over/unders. Because not only is it hard enough to get a feel for a game when one team is potentially going to be resting their starters, but not we have two teams who are both likely to be doing that, although one might not, or might only do it for a little bit, or who knows?

You're going to find that "who knows?" is a common theme throughout these over/unders.

The Eagles have been priming us all week for them sitting Jalen Hurts — and it almost feels like they're going to unnecessary lengths to do so. We all know Hurts is still dealing with that high ankle sprain he suffered against the Giants. And while he played the last two games after missing their Week 13 win over the Jets, he hasn't been at 100%. He looked closer to that in the win over Washington, but high ankle sprains typically take a good bit of time to heal, and it's no surprise that it's currently still bothering Hurts.

At least that's what the team wants you to think by placing him on the injury report and limiting him in practice all week. It certainly sounds like the Eagles starting QB is going to get the day off under the guise of injury, but make no mistake about it, if this game mattered, Hurts would absolutely be out there. Since it doesn't, this is clearly the smart move for the Eagles, especially if he's not quite 100%. Giving him time to heal and get closer to his best self outweighs any advantage that would be gained by trotting him out there to try to break the current streak of slow starts.

Now that we've made it clear that Hurts is almost certainly not playing in this one, let's turn our attention to the guy who will be playing: Gardner Minshew. The Birds backup QB looked really good in his lone start this season, leading the Birds to a win over the Jets in Hurts' absence. In that game, he threw for 242 yards and a pair of touchdowns, completed 80% of his passes, and averaged nearly 10 yards per attempt. Not too shabby, even if it was against the Jets.

This weekend, the competition should be tougher, but if Dallas rests its starters for the majority of the game — not to mention the guys who have already been ruled out on the defensive side of the ball — it's not hard to see a world in which Minshew again has multiple touchdown passes.

The problem, however, is that the Eagles will also likely be resting many of their starters, including along the offensive line and at the receiver position. Dallas Goedert and Jack Stoll are both on the COVID list, leaving Tyree Jackson as the only active tight end. At wide receiver, DeVonta Smith said he wants to play — and is one touchdown from hitting the over on his preseason total — but it seems more likely that he gets the day off along with Hurts. In other words, it could be a whole lot of Greg Ward, J.J. Arcega-Whiteside and, probably, Jalen Reagor.

The Eagles are averaging a little over 160 yards per game this season, and more if you only look at their last nine games since Sirianni decided his team was a running team. But it's going to be tough for them to hit that number in this one. For starters, the Eagles top three running backs have all already been ruled out: Miles Sanders (hand), Jordan Howard (COVID list) and Boston Scott (COVID list). Howard and Scott could technically be activated from the COVID list prior to kickoff, that's not likely to happen since the Eagles will be able to elevate a member of the practice squad for each player still on the COVID list, giving them a steady stream of backups that they wouldn't otherwise have available.

In addition, the Eagles leading rusher overall (and third in terms of YPG) is actually Hurts, who has  784 yards on the season (52.3) per game. Without him, Sanders and Howard, the Eagles will be missing 173.1 rushing yards per game. Kenny Gainwell may have a bright career ahead of him, but I don't think he and Jason Huntley are making up for all that on their own.

The Eagles have run for at least 100 yards in all but two games this season and have hit the century mark in 11 straight games. Unfortunately, without their top four rushers and the majority of that dominant offensive line, that streak could come to an end on Saturday night.

Normally, in a game like this you'd be almost guaranteed to learn of a new player. Now, with the changes in the rules allowing practice squad guys to replace players on the COVID list? You don't stand a chance.