Week 13 NFL picks: Rounding up the experts' predictions for Eagles vs. Packers 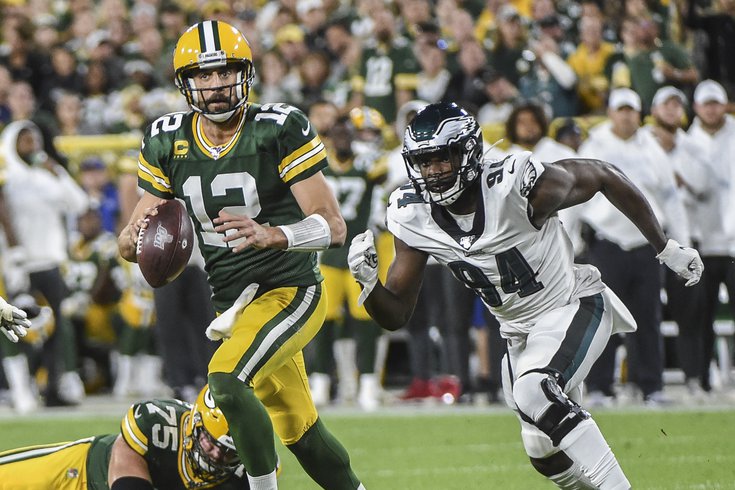 The long march toward the conclusion of the Eagles' 2020 season will take its next step on Sunday when the Birds visit the Green Bay Packers looking to snap a three-game losing streak and stay in the hunt for the NFC East title.

At least, that's what the team will be hoping for. The fans, on the other hand, are decidedly hoping for the opposite, as the winner of the worst division in football history will be picking no better than 18th in the NFL Draft. On the other hand, the team finishing in second place in the division will likely be picking around 8th overall, despite the fact that there may only be a half game separating the two.

The Eagles are no longer in first place and now actually have to win games to win the division. Are you still hoping for a playoff birth? Or are you ready for them to lose to get a better draft pick and maybe a shakeup in the front office/coaching staff? Join @asalciunas975 10-2

While some have been on the losses-are-actually-wins train for the majority of the season (*raises hand*), it appears according to that totally scientific poll above that the fanbase as a whole is beginning to come around on the idea as well. Being hesitant to root against one's team is understandable, but it's impossible to look at the current state of the Eagles and think they benefit in any way from making the playoffs.

In fact, it's actually quite the opposite. And the only argument in favor of it — Carson Wentz needs as much playoff experience as possible — is losing validity by the week. Just think about it for a second. Throwing this version of Wentz into the playoffs for what would likely be a first-round blowout probably isn't the best type of postseason experience and could actually have a negative effect on his confidence, especially after the way last season ended. And a playoff berth could prevent some of the wholesale changes needed at the NovaCare Complex from taking place this offseason.

Still, not everyone has come around on the "blow up the Eagles" refrain that we've been singing here at PhillyVoice. However, there is one thing that almost everyone inside and outside of football can agree on: the Birds don't really stand a chance in Green Bay on Sunday afternoon. And the predictions below back that up. Even the oddsmakers are giving the Eagles little chance to pull off the upset in Lambeau like they did last year, as they're currently 8.5-point underdogs according to TheLines.com.

We've already broken down the injuries on both sides of the ball and offered up predictions of our own for Eagles vs. Packers — as well as picks for every Week 13 game. Now, as we do every week, let's take a look at how the local and national media sees this game playing out...

• PhillyVoice staff: No surprise here, but all seven of our writers are picking against the Eagles on Sunday, which as we alluded to above is going to be a trend this week. Here's what Evan Macy has to say...

The Eagles will score a garbage touchdown, like they have in their two most recent losses that were way worse than the score indicates. But they were crushed. I predict the same will happen Sunday.

Here are the two teams we are talking about:

I could go on and on, but you get the point.

Sadly, as we broke down in our look at the NFC East, the Eagles could lose the next three games and still control their own destiny to make the playoffs.

• Inquirer.com: All four of their writers are predicting an Eagles loss in Green Bay. Like a couple of our writers, Les Bowen of the Daily News, who has a 30-18 win for the Packers, didn't overthink his prediction. And honestly, it's hard to argue with his reasoning here.

• NJ.com staff: All six of their writers are picking the Packers to beat the Birds on Sunday, including Mike Kaye.

The Eagles are bottom-dwellers and the Packers are among the NFC elite. While Philly offered a fun surprise win last season, the magic has eroded and Doug Pederson looks like a shell of himself as a play-caller. QB Carson Wentz would be better off on the bench after this one because the Eagles will fall even further to the abyss.

• Bleeding Green Nation staff: Last week, seven of their nine writers took the Seahawks over the Eagles. And after watching that performance from the Birds on Monday night, they somehow collectively have more confidence in them to go into Green Bay and beat the Packers, with only six of their writers picking against the Eagles. I'd love to get an explanation.

• ESPN staff: Each of their nine NFL experts are picking Green Bay.

These teams' defenses are on similar paths these days, building toward flowery features of "resurgence" after facing soft spots in the schedule. ﻿Carson Wentz﻿ is so inaccurate -- and Philly's offense is so lost -- that the opposition mostly just needs to show up.

• CBS Sports staff: All eight of their writers are rolling with the Packers, including Pete Prisco, who sees a 33-21 win for Green Bay.

The Packers are flying high right now, while the Eagles are mess. The Packers have an explosive offense that will again put up a good number against a solid Eagles defense. The Eagles won't be able to keep up. Aaron Rodgers continues to do his thing. Packers big.

Philly found a way to win at Lambeau Field a year ago. It feels like a decade ago.

The Eagles are an absolute mess, and there’s little reason to think they’re going to get any better.

• USA TODAY Sports staff: All seven of their writers are picking the Packers.

• SB Nation: For the second time, we've found an outlet picking the Eagles, but upon closer inspection we realized that the lone SB Nation writer picking the Eagles is one of Bleeding Green Nation writers listed above. We've taken her pick, along with Brandon Gowton's pick (the Packers) out of this so as not to double up. That left us with eight writers, all of whom are taking the Eagles.

Coming out of their Week 9 bye, the oft-mocked Philadelphia Eagles have scored just 17 points in three consecutive losses. Few expect them to suddenly wake up at Lambeau Field in Week 13, but half of our experts are laying 8.5 points with the Green Bay Packers.

Sobleski in defense of laying the points: "The Packers are the NFC's best squad, while the Eagles are coming apart at the seams. Some will see this contest as a potential trap game for Green Bay, especially with a rather large spread. However, Philadelphia quarterback Carson Wentz hasn't shown any signs in recent weeks of returning to form and being able to carry the Eagles toward competitiveness. Keeping games somewhat close against the Browns' and Seahawks' porous defenses over the last two weeks shouldn't impress anyone."

Gagnon on the taking the points: "The Eagles are desperate, the Packers have been prone to dud performances of late, and Eagles back Miles Sanders could go off against a bottom-10 run defense in DVOA. Throw in that Green Bay won't have center Corey Linsley, and this number is simply too high."

You can see why it might be tempting to take a shot at Philly with the backdoor cover on the table as well. Still, you won't be faulted for avoiding this one entirely.

• The Athletic: All three of their writers are taking the Packers to beat the Eagles by double digits, including Zach Berman.

One side is 8-3 with the top scoring offense in the NFL and Aaron Rodgers at quarterback. You know what’s happening on the other side. I can’t pick the Eagles to win a game until they offer a reason for confidence. It’s hard to pick them to cover, too, considering how these two teams are playing. The Eagles’ best chance of an upset is to have success on the ground like they did last season and only require an efficient game from Wentz. That’s probably too much to ask. On defense, they won’t stop Rodgers. The key will be to tighten up in the red zone and limit the Packers to field goals instead of touchdowns. In the Eagles’ win last season, Rodgers threw for 422 yards but Green Bay was 3 of 7 in the red zone. Even if that’s the recipe, the Eagles don’t have the ingredients. They will lose this game, ensuring their first losing record since 2016. Packers 28, Eagles 17.

The Eagles marched into Lambeau Field and stole a 34-27 victory last season after falling behind by double digits in the first half. Chances are the Packers remember that game, and Aaron Rodgers makes sure it doesn't happen again. Green Bay's defense still has some trouble closing the door.

The Eagles are coming off a short week but desperation will continue as they try to salvage a second straight NFC East title. Their success in the running game and throwing to their backs will keep them hanging around, but eventually, Aaron Rodgers will easily outduel Carson Wentz to ensure the Packers get revenge for an early 2019 loss at Lambeau Field.

To recap, that's over 70 predictions for this game, and just those three homers from Bleeding Green Nation picking the Birds.