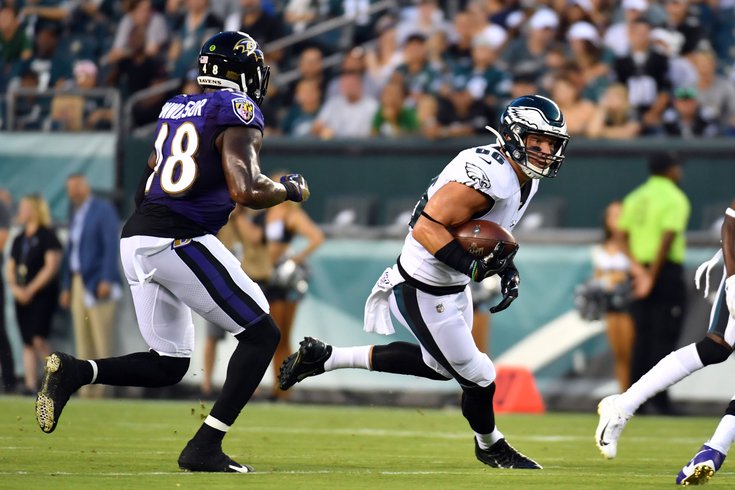 Boy, the NFL scheduling gods really didn't do the Eagles any favors this season, huh?

Luckily, the Eagles get to play six games against that dreadful NFC East, but unfortunately they're already 0-1 in those games after dropping the opener to Washington. And against the only team in those other two divisions with a losing record or a negative point differential (the Bengals), the Birds managed just a tie. (Yes, their lone win did come against the 49ers, but San Fran was without its starting quarterback and top running back and is currently the worst team in the NFC West.)

After taking on the Steelers last week, and ultimately falling short despite keeping it close for most of the game, the Eagles will now face the Baltimore Ravens, who may be in second place in their own division to Pittsburgh, but still boast the best point differential in all of football (+73) by a fairly wide margin — and that includes their two-touchdown loss to the Chiefs earlier this season, their only defeat of the season.

Now, the Ravens will make the short trip up I-95 to play the Eagles in a game in which they're favored by more than a touchdown, according to the consensus line over at TheLines.com, while the Birds will hope the sound of fans inside the Linc for the first time all season will energize this team as it looks to turn its season around and avoid a 1-4-1 start to the season.

So, how do our writers see Sunday's matchup in South Philly playing out? Let's take a look, as we do every week, with out staff predictions...

Remember the good old days, when Eagles fans worried about "trap games" on the team's schedule? By "trap games," I mean seemingly easy opponents that they could maybe overlook because more important opponents loomed on the schedule ahead?

Those were the days, huh? Well, the Eagles are the trap game now. After this Sunday, the Ravens face the Steelers, Colts, Patri*ts, Titans and Steelers (again), so it would be easy for Baltimore to overlook this comparatively bad and unimportant Eagles team.

That's about all I got in terms of the Eagles' chances of winning this game, because the matchups overwhelmingly favor the Ravens, a team that puts a whole lot of pressure on opposing linebackers to stop their elite running offense, and ability to attack the middle of the field. Of course, as we've seen this season, the Eagles' linebackers have been woefully incompetent.

Carson Wentz does seem to be shaking his early-season struggles to some degree, and the belief here is that the Eagles will be able to put some points on the board, but Lamar Jackson and the Ravens' offense is just too dynamic for them to handle right now.

Okay bare with me on this one. Since no one in their right mind uses this as a resource from which to accumulate gambling advice, I’m going to see if I can get the Eagles an upset win over the Ravens in Week 6. I am still winless on the season, and I am glad picking Eagles games is not the basis for my employment. Baltimore has a killer defense and run game that could keep Carson Wentz’ opportunities limited. If he learns from his past mistakes (a big if) the Eagles have a chance. For the sake of the reverse jinx possibly, I’m taking Philly. Let’s see if I get to 0-5-1.

It might have taken five weeks, but I finally got my first win of the season last week by picking the Steelers to beat the Eagles. Now, with another AFC North foe on tap for the Birds, let's see if I can string together two straight wins by against picking against the Eagles (again) in their Week 6 matchup with the Ravens. With the exception of their loss to the Chiefs on Monday Night Football, the Ravens have more than taken care of business this season, outscoring their opponents by an average of nearly 22 points in their four wins this season.

This Eagles team does not match up well against Baltimore.  For starters, their front seven could put a ton of pressure on Carson Wentz as he continues to roll with a suspect (and injury-ravaged) offensive line. Couple that with a solid secondary going up against — well, we don't really know what the Eagles receiving corps will look like on Sunday, but it could again be led by Travis Fulgham — and it could be tough sledding on offense for Philly. But things get even worse on the other side of the ball.

Sure, the Eagles have a good defensive front that's known for stopping the run (and has done a great job of getting to opposing quarterbacks this season), but the linebackers have been so bad that it's impossible to not envision Lamar Jackson running circles around Nate Gerry and Co. Baltimore loves running the ball, especially with their talented quarterback — and we've all seen how the Birds defense looks against non-RB ball carriers. Stopping this rushing attack, which puts tons of pressure on the linebackers, is not going to be easy for an Eagles team that notably invests very little in the position.

The only thing the Eagles really have going in their favor this week is their first home-field advantage of the season, as a limited number of fans will be allowed in the Linc for the first time all year. Unfortunately, that's not going to be enough to get this team going, and that early support could turn to abject anger if the Birds fall behind early. After a 1-3-1 start to the season, this fanbase is looking for something to be positive about, but won't need much of a push in the opposite direction to let the boo birds fly in South Philly.

The Ravens season to date has been filled with comfortable wins, outside of their loss to the reigning Super Bowl champs in week three. The Eagles are getting fans back in the stands this weekend and Carson Wentz looks like he’s rounding into form, so there’s room for a bit of optimism.

Just not enough for me to think they have a chance in this one. Baltimore has crushed common opponents the Eagles tied or lost to. No reason to overthink this.

The Eagles' march towards irrelevance will continue with a 1-4-1 record through mid-October. The Eagles will have problems against a great Baltimore defense, and those rabid fans will let them know it when they begin stumbling again. This is another crucial game, because once the Eagles fall to 1-4-1, their next 10 games guarantee nothing. Can they go 8-2 over the next 10? Probably not. They're more likely to go 4-6. But hey, the Eagles do have the next Jerry Rice, Travis Fulgham. The guy will make this season a little more tolerable.

The other scary thought is that the Washington Team and the New York Giants are already in their rebuilds. Dallas is already ahead of the Eagles. The Eagles have some catching up to do. That starts with the organization admitting that they have to start rebuilding. They're going to get a good glimpse of what a Super Bowl contender looks like and how far they are away from that — and where they were in 2017.

MORE: Eytan Shander: If the Eagles can't win the NFC East this year, it's time to pack it in

Not only did I miss the score last week, but botched – once again – the Eagles ability to cover that big spread. I won’t be fooled again, for the fifth time. Baltimore is really good unless they are playing the Chiefs. They beat up bad teams – especially on defense. The Eagles are a bad team. Injuries are killing them, but so is a lack of talent/depth. Lane Johnson isn’t going to play – or not much, for sure – so that is a huge indicator for me.

Take the Ravens to win and cover the spread, if it’s anywhere between 7-8.5 points. I’d wait until it hits 10 before I think of taking the Eagles here.

It doesn't get any easier for the Eagles this Sunday with the talented Baltimore Ravens on tap. In a typical season, maybe the short trek up I-95 in front of 70,000 partisans might help even the playing field a bit for Philadelphia but home-field advantages have largely been neutralized in the COVID-19 environment and adding 5,500-or-so fans to that equation isn't going to affect much.

The Ravens have it all, a strong organization, a marquee head coach, a top-5 level roster and a reigning MVP at quarterback in Lamar Jackson, maybe the template for the modern duel-threat at the position. They're also coming off a dominant 27-3 win over Cincinnati, forcing three turnovers while piling up seven sacks and 15 overall QB hits, something Carson Wentz will take notice of because his offensive line is now down down to Jason Kelce and Jeff Stoutland making chicken salad out of you know what.

Meanwhile, in another of the long line of what could have beens for the Eagles, linebacker Patrick Queen, the No. 28 overall pick back in the spring, went off against the Bengals, tallying nine tackles, a sack, a forced fumbled, and two fumbles recoveries just as the heat ratchets up on the dismal Philadelphia linebacking corps.

This is the same trademarked Doug Pederson game the Eagles faced in San Francisco when everyone picked against Philadelphia and the team somehow found a way. Like the Niners, Baltimore is dealing with some key injuries, most notably All-Pro left tackle Ronnie Stanley (shoulder) and big-play cornerback Marcus Peters (thigh), but the Ravens aren't playing with a backup QB.

And that means "everyone" is right this time.

MORE: John McMullen: Who's to blame for your Eagles angst: Schwartz, Pederson or Roseman?