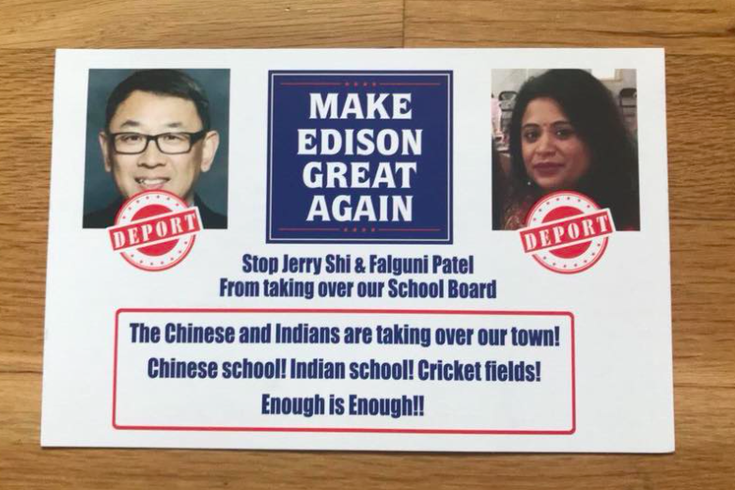 Notable among them is Ravi Bhalla, who will become the very first Sikh mayor in the state of New Jersey after winning the race in Hoboken.

Last Friday, flyers with a photo of Bhalla were circulated in Hoboken with the words, “Don’t let TERRORISM take over our town!” His opponent Michael DeFusco decried the flyers and denied any potential link between them and his campaign.

The faces of candidates Jingwei “Jerry” Shi and Falguni Patel were plastered on a mailer distributed in Edison, alongside the words “Make Edison Great Again.” Below their pictures, the mailer read, “The Chinese and Indians are taking over our town! Chinese school! Indian school! Cricket fields! Enough is enough!”

The mailers sparked outrage among many, and on Election Day both Shi and Patel secured two of the three Township Public School board seats, according to unofficial results from NJ.com.

The victories garnered support and celebratory remarks on social media.

Congratulations to Falguni Patel and Jerry Shi in Edison for winning their school board seats despite the hate mailers. Proud to see the Edison, New Jersey community rise above that. https://t.co/EHPm69fgnI

Jerry Shi and Falguni Patel, who were the targets of racist smear tactics, were elected to the Edison, NJ, school board. pic.twitter.com/Auo6kOJTNc

I can't tell you how much it means that my daughter will have civic heroes who look like her father. I'm crying right now.https://t.co/WHrIeGgesg