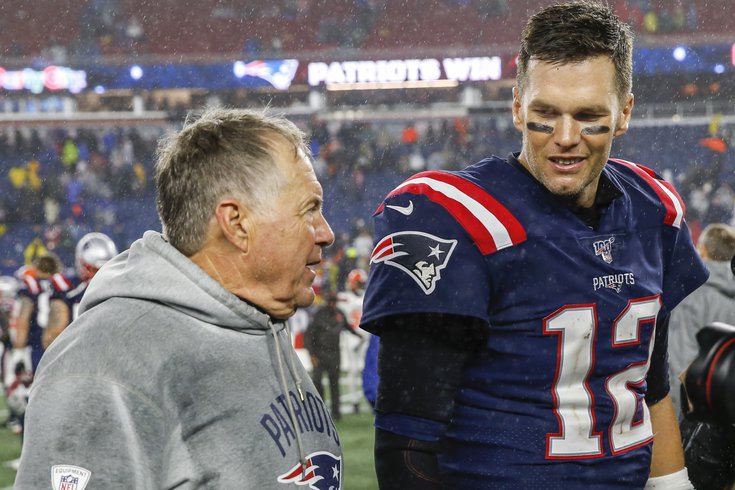 Who will take over for Tom Brady in New England?

We have never needed football more than we do right now, stuck at home, wondering about our immediate and collective future. It’s far from just a “needed distraction” or a way for your local radio host to fill a four-hour talk show. The NFL is so tightly woven into the fabric of our lives that it might be the only normal thing left.

The Eagles magnify that feeling a thousand times over as we prepare for another season of joy, frustration, and metaphorically living and dying with our team.

As we prepare for a fan-less NFL Draft — checking off all the prospects in your own mocks — I’m reminded today at how seamless of a transition it’s been from not having anything to watch to being overloaded with NFL stories. It’s been effortless to move from worrying about what to watch on TV without the NBA or NHL, to now embracing every little piece of conversation about Tom Brady in Tampa Bay.

You see, normally it would be overkill. The TV talking heads would destroy any joy I have in discussing offseason moves, mainly because of their inability to discuss something without an argument. Now? I’ll take the bad (not watching but I understand people’s need to right now) with the good, which is simply having the most important sport back in action.

“Action you say? Why, the sport isn’t even close to returning...”

Yes, action is what we have and I’m loving it. The trade for Darius Slay embodies how excited we can get in the month of March for a sport that won’t really start until September. There isn’t a sport out there in this country that demands the attention and energy in the offseason like the NFL. I’m not here to even debate it because we in Philadelphia are among the league leaders in caring about our football team. You can root for other teams in other sports — I’m sure you are great at it — but let’s not discount the level of impact the Eagles winning the Super Bowl had on you and this city.

This is why we can’t get enough of Tom Brady signing with the Bucs. It’s why we are so enamored with whatever the hell Bill Belichick is doing in New England with the two current QB’s on the roster. And why we can’t stop laughing at Bill “Chip” O’Brien for trading a top WR that he simply didn’t like.

Make no mistake, we will go through that lull that happens every summer with the NFL, but it’s a little different this year. Even sports gambling returns in some fashion with the arrival of NFL futures.

Stay at home, listen to the doctors (more on that below), and try your best to limit the amount of news intake each day. Those are the three pieces of advice to build on, but I’d like to add a fourth. Embrace everything we have right now with the NFL, from trades to the new Rams logo.

Whatever you are going through right now, the NFL has always been there as a break from the norm. With the definition of normal changing by the day, I thought it important to recognize the one sport that brings the majority of us together… even if it’s to all hate the Cowboys.

Coping with the COVID-19 pandemic

We got some great reaction on last week’s video, including a couple of follow up questions. I want to keep this as open of a forum as possible. Please send any questions you have to my DM on Twitter @shandershow.

(NOTE: These are not recaps of the show but more so my larger interpretation of what’s going on, hoping to create some discussion for you. Also, if you haven't watched the most recent episode, be warned, there are spoilers ahead.)

If you are paying attention to Westworld – reading Matt Mullin’s thoughts are a must – then Season 3's second episode this past weekend should not have come as any real surprise.

But – as you see it’s Westworld – we never pay attention to the right thing until it’s revealed right in front of us. With much more storyline to playout this season, including at some point the return of Ed Harris, the show re-introduced its strongest character, Maeve. This – the process itself – is what the show does best. It’s why “The Winter Line” will go down as one of the show’s best episodes.

Thandie Newton and Ed Harris routinely compete for the title of which compelling character is best played by their respective “host.” I say this as a huge Harris honk, without any hopes of sounding hyperbolic, but Newton is in a league of her own. Maeve's initial assessments of the simulation she and others are locked in defines the range she’s capable of on screen. It’s not a sense of forced compassion that ‘Dolores’ struggles with, or the same emotion that Ed Harris can’t always nail. It’s confusion. Watch as she initially struggles with two familiar techs looking at her like any other host; her subtle change of facial expressions that follow her change of tone as she figures out Sizemore is a host.

Once the switch is flipped, and she realizes her fate, it’s not long before the typical down-to-business Maeve returns and breaks out. A familiar face, but even she struggles to say goodbye once again to Hector, proving that no matter host nor human, it truly is so hard to say goodbye. The escape scene itself is a reminder of how creative the show can be without falling into typical shoot-em up violence.

There’s a nice break from the Maeve simulation as we get to see the bond between Bernard and Stubbs revived. Stubbs gets reprogrammed by Bernard – another host – in order to save him. A poignant existentialist statement about Stubbs having nothing left to "live" for after saving Bernard. The favor is returned as Bernard continues to demonstrate being human isn’t all that difficult. Of course, the move goes hand in hand with self-preservation, as Stubbs is one of the few people on the planet who believes Bernard.

Finally, I warned you about all these cameos. It’s nice and cute when Marshawn Lynch works his way onto the show – even if he's taking away valuable screen time from Bernard or Maeve or even the Man in Black. But what a smack in the face it was to put those two crumbs from GoT in the show. Poor Drogon.

RELATED: March streaming madness: Vote on our bracket for the best show (Round 1 — Netflix) | Missing the games? Here are the best sports movies, TV shows and documentaries to stream