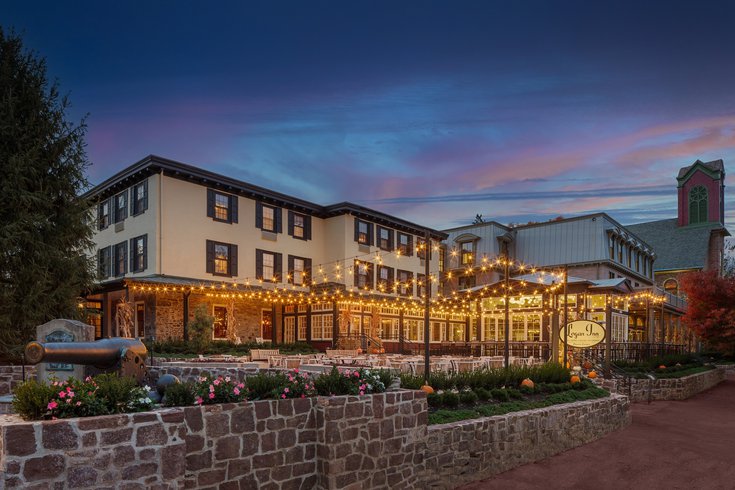 A look at the exterior of the newly-renovated Logan Inn, which opened a new 'primitive' farm-to-table restaurant called Ferry + Main this summer.

The Logan Inn in New Hope is one of the oldest businesses of its kind in the country, but it is far from stuck in the past.

Extensive renovations over the last couple of years have resulted in the opening of a new, high-end farm-to-table restaurant that serves modern American cuisine called Ferry and Main, as well as the addition of 22 new rooms to the historic building.

The core of the Logan was constructed in 1722 by John Wells, an influential early settler in the area who established a ferry across the Delaware River near the building.

The Logan was already 50-years-old when Washington crossed the Delaware River a few miles down the road.

It wasn't until much later that the hotel acquired a reputation for being haunted. That happened when Emily Lutz, the mother of a former owner named Carl Lutz, died in room No. 6 in 1985. A portrait of Emily from her wedding day still hangs in the inn's lobby and Smith said that she and many guests still sense her presence in the building, but not in a threatening way.

"It's just a feel," Smith said. "(Emily) just feels that this is her home and she's not ready to leave."

Smith claims that there are other spirits in the building, as the bodies of people who died during the winter when the ground was too frozen to dig graves were stored in the inn's basement.

Landmark Hospitality, the company which bought the inn nearly eight years ago, respects the building's history but is also determined to bring the establishment into the future. The business reopened back in August 2021 after two years of construction.

The biggest change at the time of the renovations was the opening of Ferry and Main, an open kitchen restaurant that combines new age flavor profiles with primitive cooking techniques.

Smith said that the Logan has always offered traditional pub fare, but the cuisine that Chef Greg Vassos has introduced is on another level. He has worked at a number of high end restaurants across the country, most recently at Brick Farm Tavern in Tarrytown, New York.

Ferry and Main is equipped with what Vassos called an "open-fire grill works setup" which allows him and his cooks to work with an open flame.

"We have two sides of the grill that we can coal-feed at the bottom and a wood fire on the back for flavor," he said.

Every dish touches the open flame, which is what gives the restaurant's dishes their signature "primitive" flavor, Vassos said. He sources his ingredients from farms across Bucks County and added that his menu changes on a weekly basis.

One dish that he's kept on the menu but made seasonal changes to is a sous-vide duck breast that is finished on the grill to give it extra char and flavor. Another dish Vassos had on the menu last week was a beef tartare made with locally-sourced top round. For dessert, he offered a cheesecake mousse topped with cocoa feuilletine crumble and brandy cherry.

There's a lot happening at the Logan. Earlier this month, the inn hosted a competition which set out to identify the best bartender in Bucks County.

Vassos said Ferry and Main has also been holding whiskey tastings every Wednesday and that he plans to put on a few dinners with curated wine selections at the end of March. That's in addition to an Easter brunch he'll be hosting next month.

Reservations at the Logan and Ferry and Main can be made on the inn's website.