Benjamin B. Comegys Elementary in Kingsessing also received $40,000 from Wells Fargo and a hallway painting from Mural Arts 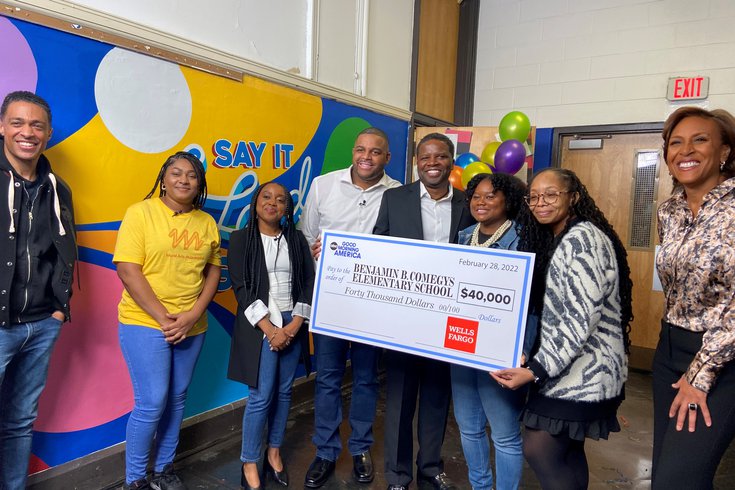 One teacher and the students at her Philadelphia public school started the week off with a surprise from "Abbott Elementary" creator and star Quinta Brunson.

The West Philly native presented third grade teacher Xiomara Robinson and Benjamin B. Comegys Elementary School in Kingsessing with new books, school supplies, a $40,000 check and a refurbished hallway on an episode of "Good Morning America" on Monday. Brunson was joined by ABC's Robin Roberts and T.J. Holmes.

Holmes and the "GMA" crew came to Robinson's home early Monday morning, telling the teacher that she was in for a day full of surprises.

Robinson later walked into her classroom to find her third grade students and Comegys Elementary Principal Rauchaun Dupree cheering for her.

"It's amazing. I love (teaching). I love (the kids)," Robinson said. "To me, it's just an opportunity, it's just a great time. I don't see it as a job, but I see it as a privilege to really help them become who they really want to be."

Robinson, who said she watches "Abbott Elementary," was overjoyed when she saw Brunson walk in.

Brunson, with the help of Roberts and Holmes, gave Robinson's classroom $20,000 in books from Scholastic and a truck-full of school supplies from Staples. The school also received a $40,000 check from Wells Fargo and a new hallway painting from Mural Arts Philadelphia.

"First of all, the whole show is dedicated to teachers like you," Brunson told Robinson. "I hope that you're enjoying all of this. Everybody here loves you, everybody in the whole school. We make 'Abbott' for teachers like you and I'm happy that you enjoy the show."

Principal Dupree said that the funding will go towards buying audio and visual equipment, PBIS incentives and auditorium enhancements.

"This is amazing," Dupree said. "Just the fact that we're honoring a teacher like Ms. Robinson warmed my heart. But to know that when we were talking about equity, this is something that will really help us when we're talking about equity. This is gonna go to doing some amazing things here at Comegys."

The show's production team and ABC recently decided to redirect some marketing dollars towards giving back to teachers and schools, Brunson told Terry Gross during an interview on NPR's "Fresh Air" last week.

"We chose to put the marketing money toward supplies for teachers," Brunson said. "It's about being able to make those kinds of decisions that really excite me, things that can really materially help people."

"Abbott Elementary" follows a group of teachers and staff at a fictional Philly public school as they educate students and navigate the challenges of working in an underfunded district. Brunson plays a bubbly second grade teacher named Janine Teagues.

The mockumentary series was originally planned to be named after Brunson's own elementary school, Mastery Charter Harrity Elementary in Southwest Philly, but legal reasons prevented her from doing so. Instead, the show's name comes from Brunson's sixth grade teacher, Joyce Abbott.

"Abbott Elementary" is full of Philly cultural references. 6ABC anchor Jim Gardner made a cameo delivering a newscast, Eagles carpets and banners are on display throughout the school and an episode showed Brunson's character teaching her students how to use Philly slang words in their everyday lives. Last week's episode featured shoutouts to Allen Iverson and Lil Uzi Vert.

The sitcom debuted in December to widespread critical and audience acclaim. The series became ABC's first comedy to quadruple its initial ratings after the pilot episode aired. The show's second episode was ABC's highest-rated comedy telecast in almost two years since the "Modern Family" series finale aired in April 2020.

Philadelphia City Council passed a resolution in January celebrating Brunson for creating "Abbott Elementary." The resolution applauded the show for embodying "Philadelphia spirit" and showing "the heart and grit of our city."

New episodes of "Abbott Elementary" premiere on Tuesdays at 9 p.m. on ABC. All episodes are available to stream on Hulu.