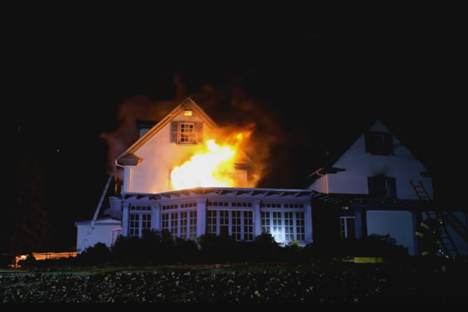 An overnight fire tore through the clubhouse at Cobbs Creek Golf Course on Monday night.

According to Chief Clifford Gilliam, of the Philadelphia Fire Department, the fire was first reported at about 11:11 p.m. on Monday night at the clubhouse at the golf course, located at 7400 Lansdowne Ave.

The fire was under control in about an hour and 20 minutes, Gilliam said.

According to Timothy Boyce, deputy fire chief of the Upper Darby Fire Department, who assisted the Philadelphia Fire Department, because of how few fire hydrants were available in the location, firefighters needed to use more than 3,000 feet of hose to tackle the blaze.

Video of the fire was posted online by phillyfirenews.com.

Boyce praised the actions of the Philadelphia Fire Department in containing and controlling the fire, where no one was injured.

"Philadelphia did a great job controlling it," said Boyce.

Gilliam said the cause of the fire is still under investigation.